In a follow up to Eva’s first post in our alternative careers series about how a research background in developmental biology can lead to a career path that lies outside of research, I hope that my description here of how I made the move from a PhD in developmental genetics to a career in publishing will be of use to anyone else out there in the community who is considering making a similar move.

My journey in science began with an undergraduate degree, not in genetics, but in pharmacology at King’s College, London, where the most important thing I learned was that I was much more interested in genetics and development than I was in pharmacology, interests that led me to a PhD with Ian Jackson and Cathy Abbott at the MRC Human Genetics Unit in Edinburgh. From there, I became a post doc in Val Wilson’s lab.

At the time of my PhD, Ian was a regular contributor to the journal club section of Trends in Genetics, and when short on time, he would ask me to write these brief pieces on a paper of interest in his place. I came to enjoy this writing exercise and, as a result of it, was offered other writing opportunities, such as summarizing new mouse knockout phenotypes for a knock out database then under development at BioMedCentral. (In fact, one of the journals I had to check every month for new knock out papers was Development.)

As my fondness for writing grew, another opportunity arose towards the end of my PhD that helped me to choose between the different career paths I was starting to consider: research, science journalism, or a job in science publishing. This opportunity took the form of a Media Fellowship from the British Science Association. These fellowships place British scientists with a media organisation for a couple of months, where they learn to work within the constraints of the media to produce interesting stories about science. I was placed with the Guardian, a national daily newspaper in the UK, where I spent several weeks under the tutelage of Tim Radford,  who was its science editor at the time. Under the guidance of Tim’s red pen, I wrote science-related stories covering a wide range of topics, from archaeological discoveries (see picture), to cancer, and even about why Mozart had such a foul tongue (he had Tourette’s, so the story went). I also had many a story ‘spiked’ by the news desk editor, when it failed to pass the “so what?’ barrier that most science-related stories have to pass. This experience taught me several important things: how to write concisely and engagingly about science; about the constraints that journalists work under; and about the importance of scientists learning to communicate clearly and succinctly with the media about their work. But it also left me a little disheartened about the difficulties of getting good science stories covered, even by a reputable newspaper such as the Guardian, when they have to compete for space with stories about politics, crime and celebrity gossip, all of which have a more tangible ‘human interest’ angle for most news desk editors. 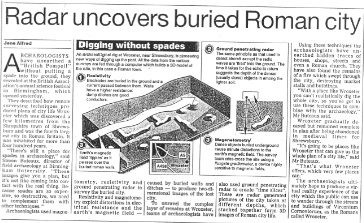 As a BSA media fellow, you write about whatever story is sent your way

As a result, I returned to the lab knowing that a career in science journalism was probably not for me while suspecting that my scientific interests were too broad to remain in research. But first I needed to give research a proper chance because to leave it felt like an irreversible decision not to be taken lightly. I have never regretted my time as a post doc; I learned much about embryology from Val, which has stood me in good stead to this day. My postdoc also broadened my scientific horizons and contacts, while giving me time to learn more about career options in publishing.

In time, I successfully applied for the job of assistant editor at Trends in Molecular Medicine (TMM), having heard good things about the Trends journals while writing for them as a student. I joined the office in Cambridge, which became a training ground for a generation of British editors, many of whom still work in publishing today. From feedback on my application, it became clear that I was offered this post because my CV showed that I was demonstrably interested in writing and in science communication; skills that complemented my role on TMM, where I assisted with developmentally editing reviews and was responsible for copyediting the content of the journal, while occasionally writing news stories for its front section and being dispatched to do live conference reporting for BioMedNet. It was a great first job in publishing, but not, as I subsequently discovered, what I really wanted to be, which was a commissioning editor. And so within a year of being recruited to TMM, I successfully applied for the role of Editor of Trends in Genetics, where I began to learn properly, for the first time, the job of a commissioning editor.

I have at heart been a commissioning editor ever since. In science publishing, a commissioning editor’s job is to determine the content of a journal, book or journal section and then to invite people – such as scientists, science writers and commentators, to write for their publication. The commissioning part of the job requires an editor to travel widely to conferences and to keep in close contact with their field, so that they can identify the topics that are the hottest and most interesting to commission articles on. The editorial part of the job comes in developmentally editing articles to improve their focus, structure, scientific content and accessibility and in making editorial decisions about whether a manuscript should be revised, accepted or rejected in response to the reviewers’ and your own editorial assessment of it.

My own experience as a commissioning reviews editor was further strengthened when I moved from Trends in Genetics to Nature Reviews Genetics,where I joined Mark Patterson and Tanita Casci to launch NRG as one of the first Nature Reviews journals. Launching NRG was a hugely exciting project that taught me not only a fantastic amount about genetics from working with Mark and Tanita and our many great authors, but also how to launch a journal from scratch. When Mark stood down as Editor in Chief of NRG, I successfully applied for this role and from this position moved to Development: my first experience at managing a primary research (and not-for-profit) journal. 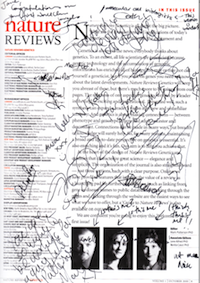 My signed copy of the launch issue of NRG

As Executive Editor of Development, I wear many hats: I manage the in house journal team, and commission and handle reviews and other front section articles, together with Seema Grewal, the journal’s associate reviews editor. I also work closely with Development’s Editor in Chief, first Jim Smith and now Olivier Pourquie, and our team of dedicated scientific editors in handling papers and author queries, and in developing the journal editorially. I am also responsible for the journal’s online presence. And in response to a Development readers’ survey in 2009, I kick started another new and exciting launch project that, once we had Eva on board, came to fruition as this: the Node, which I had the honour of naming.

Being a managing and commissioning editor is a highly interesting and rewarding role. As an editor, you learn about new scientific findings every day and have to assimilate a lot of new information quickly, and you work within a wider community, building sometimes long-standing relationships with researchers, authors and reviewers. I’m particularly fortunate in having the developmental community to work with, a community I’ve found to be tremendously collegial. And, occasionally, I’m asked to do other fun things, such as speaking at meetings about publishing and interviewing speakers at the CSHL symposia.

Getting that first foothold in publishing is by far the hardest, most competitive step of all. I was successful in making this initial move by being able to demonstrate my enthusiasm for writing about and communicating science, and by having gained experience while still in research that significantly strengthened my application for my first editorial job. Other Editors, particularly primary manuscript editors who mainly handle research papers, may  have taken different paths from research to publishing, and it’s our hope that they will also share those different career paths and their experience with you here on the Node.

One thought on “A career in publishing: a developing story”