The BSDB recently initiated an advocacy campaign, starting with (1) the gradual development of the best arguments that can be used as elevator pitches in discussions, presentations, applications or publications, and (2) the collation of support resources which were first published on the BSDB website and are now present in improved version on The Node. To take this initiative a step further, I recently took an invitation by the journal Open Access Government as an incentive to write a short text that would explain the nature as well as the societal importance and impact of DB in terms that are understandable to lay audiences. Please, read the outcome of that effort below (or read the original publication here). This is only a first attempt, but I hope that it will serve as a template that can be used and further developed by members of the DB community.

What is Developmental Biology – and why is it important?

The life science discipline Developmental Biology (DB) aims to understand the processes that lead from the fertilisation of an egg cell (or equivalent) to the formation of a well-structured and functional multicellular organism (Fig.1). At first sight, this may appear a mere curiosity-driven academic goal, not necessarily worth tax payers’ money. Here I argue that the opposite is true: DB is a key discipline in the life sciences, a motor for research into human disease and fertility, food sustainability and biological responses to environmental pollution and global warming. 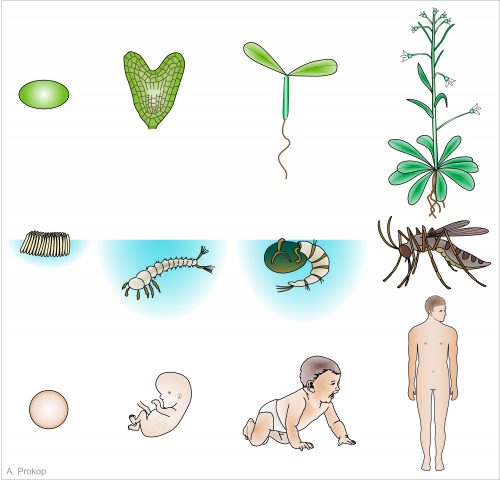 According to the US’ National Research Council, over half of initial pregnancies are affected by developmental defects, ~3% of live births suffer from major developmental aberrations, ~70% of neonatal deaths and 22% of infant deaths have developmental causes, and ~30% of admissions to paediatric hospitals are due to developmental defects. The causes can be random errors, inherited or acquired gene mutations or toxins – as illustrated by severe limb malformations of thousands of new-borns during the thalidomide/Contergan drug scandal in the 1950s, or the stark increase in birth defects after the Bhopal gas catastrophe in 1984.

These numbers and examples clearly cry out for scientific investigations into the developmental processes affected – not only to understand or even treat human disorders, but also to deliver profound arguments that convince policy makers, for example to reduce toxic wastes, fumes and plastics which pose threats to our healthy genes and development. DB is a scientific discipline at the centre of such investigations, and it has two important strategic strengths, as will be explained in the following.

DB investigates questions such as “how does the kidney or brain develop?” or “how do limbs or leaves achieve their characteristic shapes and positions?” To address such questions, a typical DB research strategy may start by identifying the genes or gene networks regulating the respective developmental processes in a chosen animal or plant. These genes can then be functionally manipulated or eliminated in order to study the resulting developmental aberrations. The findings often allow deductions about how the involved genes and processes function in health; they may also reveal parallels to clinical cases of human developmental disorders, thus directing informed biomedical research into such conditions.

To investigate processes from the genetic level all the way up to the organism/organ level, DB has to be highly inclusive and interdisciplinary, making active use not only of genetics, but also biophysics, biochemistry, cell biology, physiology and anatomy. In this way, it drives discoveries at the various levels of complexity, acts as an umbrella discipline that can provide a common focus towards essential biological questions, and builds bridges to clinicians or plant/animal breeders who tend to think at the organism/organ level.

Most DB research does not use human embryos, but covers the breadth of the animal and plant kingdoms. This ambition might seem to bear the risk of over-stretching our research capacities, but it is in fact a great strength of DB and gold mine for discovery. It turned out that many genes and functional gene networks that steer fundamental biological processes have ancient evolutionary origins and are still being used by very different species for similar purposes (Fig. 2); ~75% of human disease genes have a counterpart in fruit flies, and ~50% of yeast genes can be functionally replaced with human genes. Capitalising on this principle of ‘deep homology’, highly efficient and cost-effective, hence economically responsible research can be done in smaller organisms, such as worms, flies or even yeast. The genes and concepts learned can then be tested in mammals (most frequently mice) and eventually used for clinical trials. This discovery pipeline has led to significant understanding of human biology and disease, as evidenced by an impressive number of Nobel Prizes in Physiology and Medicine awarded to scientists working with these “model systems”.

What DB has done for us (so far)

DB research starts with the fertilisation of egg cells; studying the underlying processes has provided the foundations for much of what fertility clinics can do these days. DB investigates how fertilised egg cells divide in regulated manners to grow into full-size bodies, how the cells formed in this process communicate in meaningful ways to become different from each other, migrate, change shape and attach to each other, thus assembling into tissues and complex organs. Many of these processes are needed again during wound repair, and DB research helps to speed up wound healing, prevent scars and overcome chronic wounds. Also ‘tissue engineering’, which aims to grow replacement tissues in a plastic dish, is essentially guided by DB research. In cancer, cells lose their identity, divide excessively, detach from their local environments and migrate to form metastases. Much of this understanding that can instruct cures to contain these aberrant cells, comes from DB research. Tissues keep so-called stem cells which can be re-activated in orderly manners to divide and grow replacement tissues. There are high hopes from stem cell research, for example to replace cartilage in arthritis or damaged discs, or brain cells in dementia, much of which is guided by the vast knowledge gained through DB.

The applications of DB go far beyond biomedical research. For example, understanding plant development provides a means to speed up breeding processes, such as optimising root systems, plant size or flowering time, thus contributing to the efforts of achieving sustainable food security in times of over-population. Furthermore understanding environmental influences on development, such as temperature-dependent sex determination in turtles, has enormous importance for conservation biology, especially in times of increasing pollution and global warming.

In conclusion, DB may appear as a mere academic discipline, but its value for society is enormous. This should make us think about a carefully balanced system of science funding. Current trends seem to favour clinical or industrial research performed to translate biological knowledge into economic or societal benefit. But we must not overlook that fundamental research, such as in the field of DB, lays the long-term foundations for such developments.

The author Andreas Prokop is Professor of Cellular and Developmental Neurobiology at the Faculty of Biology, Medicine & Health (The University of Manchester). He has long-standing experience in the field of science communication and is the communications officer of the BSDB. He would like to thank Ottoline Leyser and Aidan Maartens for helpful comments on this manuscript.