Established by the British Society for Developmental Biology in 2014, The Gurdon/The Company of Biologists Summer Studentship scheme provides financial support to allow highly motivated undergraduate students an opportunity to engage in practical research during their summer vacation. Each year, ten successful applicants spend eight weeks in the research laboratories of their choices, and the feedback we receive is outstanding. You can read accounts from previous years here. If you’re interested in applying or hosting a student in 2020, applications need to be in by the end of March.

Our ninth report from the class of 2019 comes from Vlad Arimia (UCL) who studied chick neural induction in Claudio Stern’s lab in UCL.

Developmental biologists have sought the mechanisms regulating neural induction ever since Spemann and Mangold demonstrated that grafts of the dorsal blastopore lip can induce ectopic neural axes (Spemann & Mangold, 1924). Almost a century later, neural induction still has its mysteries, but perhaps not for long.

The Stern lab now mixes classical embryology with transcriptomics to re-evaluate neural induction in the modern molecular era. Grafts of Hensen’s node to a region of competent area opaca (Fig. 1A) can induce ectopic neural tubes from ectoderm that does not normally contribute to the nervous system. Combining this assay for ectopic neural induction with RNA-seq at various time points, they have identified all genes that change in response to a node graft up to the time when neural plate formation begins (Trevers et al., 2018). Additionally, many secreted signalling factors have been identified from the transcriptomes of key signalling tissue. These screens have provided a wealth of new tools that have started to shed new light on the complex nature of neural inducing signals and how ectodermal cells respond to them.

Under the watchful eye of Katherine Trevers (a postdoc in the lab and a great mentor) I learnt how to culture chick embryos (New, 1955; Stern &Ireland, 1981) and mastered the micromanipulations necessary for my project (Fig. 1B-F).

These consisted of grafting beads soaked overnight in the putative inducer to the competent region of the area opaca (Fig1A, B) and incubating them for 5h. Then, I would carefully remove the bead and dissect the (tiny!) region of tissue directly beneath it which had been exposed to the putative inducer. Dissected pieces of tissue were stored at -80°C until I had collected 24 of them – a much bigger challenge than I had anticipated! After considerable perseverance I collected all the necessary samples, which were then analysed by NanoString nCounter technology. This technique uses fluorescently barcoded probes to count the number of mRNA molecules in a sample and the Stern lab has a large probe set that includes all the transcription factors whose expression changes in response to neural induction (more than 200!), as well as many controls.

It was tremendously exciting to quantify the expression of these genes in response to our putative inducers and compare them to a vehicle control. Especially when our analysis revealed that both molecules induced interesting transcriptional responses- one upregulating and the other downregulating different subsets of genes. These results are strong indicators that the molecules I was testing may contribute to neural induction. However, these preliminary results need to be validated by checking the transcriptional responses identified through methods such as in situ hybridisation. Also, loss-of-function experiments would further confirm our observations. All in all, I am happy that in a relatively short time I was able to learn enough embryology as to get to tangible results!

In addition to the experiments described above, I also had the opportunity to repeat some classical experiments myself. By grafting Hensen’s node, I confirmed that 5h of signals can induce the neural marker Sox3 (Fig. 1C) while Sox2 can be induced after an overnight culture (Fig. 1D). I also repeated experiments demonstrating that beads soaked in FGF8b (Fig. 1E, F) can induce early markers, such as Sox3 (Streit et al., 2000). Thus, I have not only made a small contribution towards understanding the molecular basis of neural induction, but also repeated some of the key experiments that have been the fundament of research in this field.

Although challenging, I found these embryology techniques extremely satisfying and enjoyable. So much so, that I miss being at the bench surrounded by all the amazing members of the Stern lab (part of them in Figure 2). Whenever Nidia (our lovely lab manager), asked how I was, I would reply that I was having fun. And indeed, I had a wonderful summer in Claudio Stern’s lab at UCL as part of the neural induction subgroup. 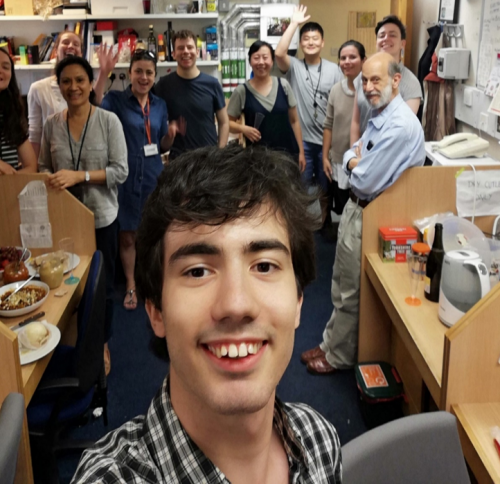