Our third report from the 2018 group of student awardees comes from Natalie Dugdale (student at The University of Liverpool) who undertook her research with Thomas Butts (also at Liverpool).

The cerebellum provides a good model for the study of the cell cycle and differentiation of neurons in the brain as a whole due to the great number of neural progenitors it produces. Tom’s lab focuses on the bone morphogenetic protein (BMP) signalling pathway and how the manipulation of proteins within this pathway affects the timing of a neural progenitor cell’s exit from the cell cycle, leading to terminal differentiation. When BMPs bind with their corresponding receptor on the cell surface, SMAD proteins are activated and these can initiate transcriptional changes through downstream signalling within the cell. By introducing an altered SMAD protein via vector into chick embryos through microinjection, the team was able to follow the effect of permanently “turned on” SMAD proteins in the embryo’s cerebellar development. To begin with in my project, we injected plasmids containing GFP or Tomato to perfect our aim and competence with electroporation.

Chicks are great model organisms for developmental research due to the ease of access to their embryos and their significant genome homology with humans. The cerebellum, the focus of the lab’s research, is an area of the brain where birds and mammals share a similar physiology. Chicks and humans share a highly proliferative external granule layer; the origin of a great number of cerebellar neural progenitor cells, which form our densely packed cerebellum, buckling into the highly folded structure seen in both mammals and birds. 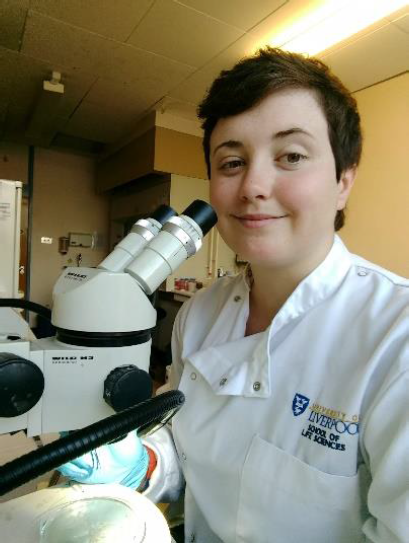 As an undergraduate student at The University of Liverpool I was lucky enough to be awarded the Gurdon/BSDB Summer Studentship this year. This allowed me to spend two months in Dr Tom Butts’ lab within the Department of Cellular and Molecular Physiology at the University of Liverpool, researching neuronal development within the cerebellum. In my first few days in the lab, I was mostly shadowing Graham and Hal, both Masters students nearing the end of their projects and helping Wen, another undergraduate on her summer placement. Whilst watching Graham injecting E4 embryos I was a little stunned when he finished an embryo and asked me if I’d like to try a few. Suddenly feeling very much in the deep end, I took him up on the offer and spent an exceptionally long time tentatively breaking through membranes (in constant fear I would damage the embryo) and shakily making my first injection and electroporation of the rhombic lip within the hindbrain, from which the cerebellum develops. Although a delicate procedure, I was quite surprised I was able to accomplish it, then even more surprised to see the following day that one of my embryos had taken up some DNA in the brain (surely beginner’s luck!). With the continual support and enthusiasm of everyone in the lab, the “deep end” I had felt I was in quickly became much shallower.

As time went on and I became more practiced (and more importantly, more confident) working on the chicks, I was finishing electroporation of half a dozen eggs in less than half the time it took me to do two in the first week. I spend a lot of time early on practising dissection of the chick embryos to
establish the skill required to create histological brain sections for imaging under confocal microscope. This was a far trickier procedure than the injections primarily due to the size of the embryo (weighing a tiny ~0.05g at E4) and it required a knowledge of chick physiology as to isolate the correct section of the brain. After the first month we also began targeting our injections to the floor plate of the mid-brain, of which some of my results can be seen below. With every good result I found myself more eager to get in each morning and analyse the previous day’s electroporations. I also had my first attempt at presenting a journal club, more good experience for someone who wants to pursue a career in research.

Wen, Lydia (another undergraduate on summer studentship) and I also worked on mapping a vector. We did not have the exact sequence and wanted to confirm the presence and order of the inserts such as the promoter, GFP label and the MCS. This was a project I felt more confident starting on with my background in genetics and we were mostly free to design the primers and run our PCRs and gels ourselves, with a little guidance from Tom. Throughout the plasmid analysis, I had to produce a comprehensive report of the primers used and results gained to allow future students to continue our work. This gave us a chance to work as an independent group, rather than following a rigid step-by-step guide with a demonstrator watching over us, as is easy to become accustomed to in lab sessions at university.

Having spent many hours peering down a dissecting microscope performing injections, electroporations and dissections, I have had a real confidence boost in my capabilities in the lab which I’m sure will go a long way as I move into my final year of university and begin my dissertation project. I have finished my summer studentship with a newfound eagerness to continue from university into a career in research in developmental biology. I am greatly appreciative to Dr Butts and everyone I worked in the lab for giving me a fascinating and fully immersive working lab experience, and very thankful to have been awarded the Gurdon/BSDB Summer Studentship, allowing me to take up this position over summer.