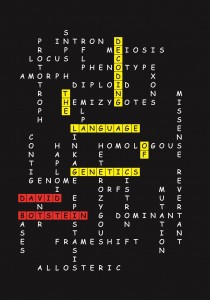 Modern biology is impossible to understand without genetics. Students today would struggle to understand Mendelian inheritance without the idea of the gene, and labs worldwide use molecular biology and genetic techniques to study different organisms and processes. Genetics has revolutionised the study of biology in the past century, and the study of genetic material keeps providing insights into fields such as developmental biology and evolution. However, genetics has also brought with it many new words, from abstract concepts to names for processes or structures, and to the untrained, it can sometimes seem daunting to approach technical texts for lack of definitions. “Decoding the Language of Genetics”, by David Botstein, attempts to address this problem.

“Decoding the Language of Genetics” is a difficult book to categorise. It is not a textbook, in that it is readable, peppered with personal comments from the author, and at times avoids going into complex subjects in order not to confuse the reader, but it is also not a “popular science” book. It is very clearly an attempt to teach: not just to make science available, but to make it understood. Instead of running away from jargon, it attempts to explain it. In the introduction, David Botstein explains that he wanted to write a book that would allow the non-geneticist to understand the geneticists’ technical vocabulary, allowing them to access technical writing by geneticists. This implies that the book is not aimed at the general public, but rather intended for those with a reasonably robust knowledge of biology in general, but not of genetics specifically.

The book starts with a very valuable introduction to basic concepts in genetics (phenotype, genotype, etc.), but failing to define gene (Botstein describes the history of the word, but does not give a formal definition, possibly because he will later define locus and functional gene, and at that early stage the preliminary concepts needed to define gene have not yet been presented). Botstein then proceeds to define commonly used acronyms in modern genetics and explain the experimental origin of such acronyms. The book proceeds in this fashion, explaining not just the vocabulary, but also why it is needed (and in some cases, why it is not). As it continues, the book goes from explaining specific concepts to explaining complex experiments and the effects they have had in both the science of genetics and in its vocabulary. Botstein often gives reasons as to why certain words are used over others, and occasionally explains his own preference for certain expressions, usually based on their clarity or specificity. As an example, he favours using synthetic phenotype over epistasis when talking about the phenotypic consequences of interactions between several genes simply because epistasis has been used very differently by different people, and he has found that the word can be confusing for his students.

The book excels where it explains concepts and supports their explanation with clear descriptions of the experiments performed to arrive at those concepts. A particularly enjoyable example of this is the chapter on functional suppression (rescue of a mutant phenotype via a mutation in a second gene that compensates for the original mutation). Botstein first gives a general definition of the concept, comparing it to previously described informational suppression. He then proceeds to name different types of functional suppressors, giving specific examples and explaining how they were discovered. He uses Georgopoulos’ and Herskowitz’s experiments with λ phage and Escherichia coli to illustrate ; Jarvik’s and Moir’s experiments with heat and cold sensitive mutants to talk about suppressors with novel phenotypes; Hodgkin’s experiments on sex determination in to describe recessive functional suppressors; and yet others’ experiments to make bypass suppression, dosage suppression and mutual interaction suppression understood. It is not surprising, therefore, that the books’ weakest points are when the author fails to give examples to illustrate a concept, or to fully explain why something occurs. This happens specially in the chapter about recombination and linkage mapping, where (to give one example) Botstein writes about the frequency of recombination: “Frec = (number of recombinant gametes)/(total gametes). This parameter can vary from 0 to 0.5”. However, he fails to give an explanation as to why the maximum is 0.5 and not 1. It may be that Botstein thought his readership would know that that these numbers are the result of an experimental observation, but having explained simpler concepts earlier in the book, it was surprising he did not provide a short sentence making this clear.

“Decoding the language of genetics” is laid out in a hierarchical fashion: starting off with basic definitions, it moves on to concepts of increasing complexity. Although this is a fantastic approach, since it allows the less knowledgeable reader to build on their knowledge, an academic audience may find the first few chapters rather basic, and give up on the book without realising that the explanations provided are necessary to understand the rest of the work. This approach also means that Botstein occasionally fails to give a definition early in the text (even though he is using the word and discussing it’s meaning, as in the case of “gene”) in favour of giving a more complete one at a later point, and this can make the reader feel that definitions are missing and, therefore, that the book is failing to do what it claims.

When I started reading “Decoding the Language of Genetics”, I didn’t understand who it was meant for very well. I found the concepts described too basic for the academic reader, but the tone too academic for the lay person. As I continued, I started to realise I was learning new things, and by the end of the book I came to a conclusion. It is the perfect book for any bioscience researcher who will encounter genetics vocabulary in their work, but who hasn’t had a thorough training in genetics. Some of the concepts at the beginning will seem basic, because the researcher will almost certainly have studied genetics at some point, but they are definitions that need to be made explicit for the concepts to be used later on. The emphasis on detailing how classical genetics experiments were performed, and how conclusions about gene and genome structure were extracted from these experiments, becomes a fantastic lesson, not only in the history of genetics, but also in experimental design and interpretation.

One thought on ““Decoding the Language of Genetics”, a review”