Everyone loves a game. So here’s a game that flexes that brain muscle, which can be adapted for all audiences, topics and required level of cuteness. 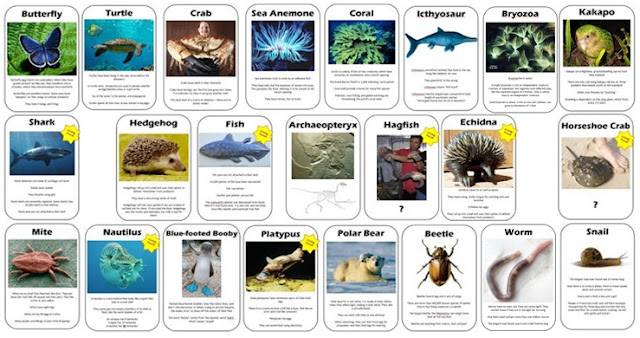 I first produced this for a demonstration event at ThinkTank Museum in Birmingham, a Meet the Scientist day themed around evolution and adaptation. The idea was simple: pair up the most similar animals. So, among the laminated cards, each with striking images and brief descriptions, were two birds, two mammals, two insects and many other animal groups. Among them were animals from similar ecological niches with strikingly similar appearances, yet differing classification, such as the European hedgehog and the echidna; and similar animals with big differences in appearance, such as the hedgehog and a polar bear — one small, one big, both from very different habitats, yet both mammals. Among them, also, were a number of wildcards to provoke critical thinking: should the archaeopteryx, for example, pair with a bird or a reptile?

The full list of creatures was a veritable menagerie intended to provoke wonder and to broaden horizons about the natural world, and linked as much as possible with the museum’s taxidermy collection. Here, pre-paired, are what I presented:

As you can see, many of them were pretty difficult, but the beauty of the activity was that cards could be removed for different audiences, and others reclassified (you could use a wider deuterostome/protostome classification, for example, or the lophotrochozoa/ecdysozoa split). You could make a big deal about living fossils, if you fancied, or just tell tales about your favourite animals. All in all, it had many children captivated, and kept their attention for a lot longer than other activities I have demonstrated in the past.

The activity could be tailored for any subject. For developmental biology, for example, you could stick with the protostome/deuterostome divide and ask which develop with a dorsal (like our spines) or ventral (like the Drosophila ventral nerve cord) nervous system, or which form mouth first… or alternative openings? Maybe you could use pictures to signify how similar the earliest stages of vertebrate embryology are? Plenty of developmental biology concepts could be introduced with weird and wacky pictures and a game to pair them, particularly for audiences who would never have seen anything on this topic before.

Here’s the downside: the game requires a lot of ongoing explanation, even for older children. I retired the bryozoa card early, for example, and found myself constantly explaining the differences between — on the surface, rather similar — creatures. But the reward for doing so was undivided attention, and evident fascination. To avoid this downside, consider carefully the details written on the cards below the pictures, and have clear examples on show. Alongside the activity I presented a poster of the tree of life, which I would recommend.

Also read Simon’s outreach post on his internship with the Naked Scientists, bringing developmental biology to the radio.