Ciencia Al Tiro (Science Immediately) is an Outreach program developed to encourage interest in science and technology. Our inspiration was to help the situation of education in Chile where there is an extremely large difference in the quality of education among schools. According to an OECD assessment of student performance, Chile has the largest gap in Latin America in performance between the private and public schools and this gap has the strongest correlation in the region with socio-economic level. This inequality in education is driven and maintained by the extreme inequality in income distribution in Chile (The Economist, December 13, 2007). Thus, because the poor quality of education in Chile is an urgent problem, we named the program “Ciencia Al Tiro” (Science Immediately; www.cienciaaltiro.cl).

We initiated our program, which is based in the Interdisciplinary Center for Neuroscience, University of Valparaiso, in 2008 using a semester to develop the hands-on workshops with the idea that the students learn about science through performing experiments and constructing projects. Valparaiso is a very poor city and our University, which is located on Cerro Playa Ancha, is within 10 minutes of some of the most underprivileged schools in the country. Starting in 2009 we implemented the workshops in our neighboring poor public schools focusing on junior high school students. Our workshops are designed and taught primarily by graduate students, although the program is open to all scientists. Initially we went to the schools to implement the workshops where as “Tias” and “Tios” (aunt and uncle, the children refer to teachers and adults a tios) we give a very short introduction (10 minutes maximum) and then start the activity.

We design science workshops to convey not only basic concepts, but also to incorporate concepts of climate change and energy efficient technology, to develop awareness and prepare the students for a future where energy will be very expensive. Thus understanding fundamental concepts in science will help resolve problems throughout life by providing a better understanding of the world around us. Our workshops cover a wide variety of topics; we build things like simple motors, solar ovens, thermometers, hand warmers, reactors for biogas, and we teach concepts for example math through the use of a compass (calculate distances and angles), nitrogen cycles through an aquaponics activity, neuroscience through building a neurons and creating a neural circuit, a theatre to explain how a solar electric panel works, genetics via Drosophila, and of course because my lab works on zebrafish we do a zebrafish development day. 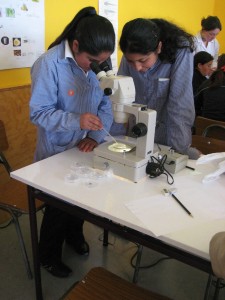 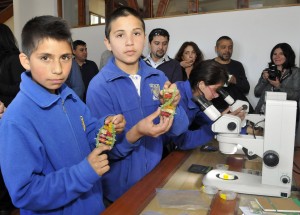 Because of the sad state of the public schools we implemented two major projects to convey how science can help with the quality of life. In one school we renovated a science room incorporating concepts of energy efficiency (insulation and double paned windows) because there is no heat in the schools. The school sits at the edge of the hill facing the open sea and temperatures can reach 6 C in the winter. Using programmable temperature sensors, our students measured the temperatures over several months in the room that we renovated and in the adjoining room showing that the insulated room had a much more stable temperature i.e. much warmer in the winter. We were awarded the Chile Verde (“Green Chile”) national recognition (Chile Verde 2010, Caso 48, page 71; http://www.porunchileverde.cl/chile-verde-2012). More recently (2011) we installed solar showers in a different public school because many children have no hot water at home. The showers were for the children and school employees so the whole community of the school learned about the technology (http://www.cienciaaltiro.cl/index.php/energia-eficiente/duchas-solares). We had an inauguratiohttps://thenode.biologists.com/wp-content/uploads/2014/08/DNA-demonstration.jpgn and it was a treat to see the students explaining to public politicians the differences between solar electric and solar thermal energy.

After doing our workshops over the years one of the most important things that captures kids’ (and adults’) attention is a dissecting microscope. They are usually fascinated first by the dirt in their fingernails before focusing on the zebrafish embryos. In addition we use the compound microscope to show the kids brain slices with labeled neurons as part of our neuroscience workshop. As scientists we often forget how really cool microscopes are. Also animals, they love the aquaponics workshop because they have fish (zebrafish) and plants in their classroom. Finally the kids like to see if the project they built functions, for example we make three types of solar ovens and then compare which style of oven gets the hottest. We then use the ovens to cook hard-boiled eggs and cookies that they can then eat. This knowledge extends beyond the students, their parents (usually the mother) often want to learn about solar ovens and if our students have siblings in the same school they often show up at the end of class to see the fish, look at neurons in the microscope, or watch fruit flies in their vials.

Because of the challenges of leaving equipment in public schools (theft is a big problem in Chile) and because we lacked space at the university for our equipment (purchased  with Millennium Science Inititaive Outreach funding): dissecting microscopes, compound microscope with a camera system, an E-Rack system used to work with zebrafish, and an Aquaponics System, we pursued a new model where, through private funding, we renovated an old house in Valparaiso near the university and the first floor is a science center dedicated to Ciencia Al Tiro. With the new science center we have initiated long-term projects with seventh and eighth graders including a project to fabricate fish food from restaurant waste. We use fish in the aquaponics system to test whether the fish (a fish found in the local reservoir called Chanchitos) like the food and use zebrafish to look at potential effects on egg laying. A second group is working with our hedgehog “Dominque” to see learn about circadian rhythms using a sensor that detects the revolutions of her wheel when she runs to measure her activity pattern (she runs 4-5 kilometers a night!). A third group is measuring watt usage and luminescence to test whether it is really true when the light bulb packages say “uses 9 watts, illuminates like 40 watts”. A small group of eighth graders returning from last year is investigating the effects of pH on plant growth and the nitrogen cycle using the aquaponics system in our greenhouse. The students will be applying to the regional science fair in October for a chance to present their projects, let’s hope all goes well! 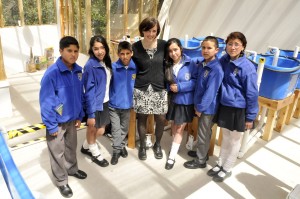 We did an extra experiment this year. I organized the Latin American Zebrafish Network Course and Symposium in Valparaiso in April. We decided to incorporate a morning of outreach and had some of our students from Ciencia Al Tiro interview our invited scientists including Dr. Monte Westerfield (USA), Dr. Derek Stemple (UK), Dr. Lila Solnica-Krezel (USA), Dr. Nora Calcaterra (ARG), and Dr. Flavio Zolessi (UR). Our students had previously participated in a workshop we ran on how to be a scientific journalist. Because of potential language problems all students were paired with a Tio or Tia who spoke English. It was a delightful event, the students not only asked about science but also the country of origin, some scientists are born in one country, yet live in another. We often forget how many opportunities we have as scientists, to travel, to meet new people, and to exchange ideas. All of this happiness and interest was conveyed in the morning of interviews. Our kids were left with the impression that science is not only “bakán” (cool) but also a tremendous doorway to understanding far away places. 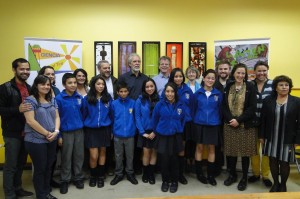 One of the main challenges of our project is that we work with children that come from very rough situations, at times some care takers (called “apoderados”; not everyone has a “Mom” and/or a “Dad”) think we are doing “tonterias” (foolishness). But we easily forget these moments when we see the kids’ excitement, when their “apoderados” show up at their end of the year presentation and are so excited that their kids have done such a cool project. On a personal level there are days where I am overwhelmed by the need, the need for exciting and interesting programs for young people, so many parents want their children in our program, yet we are small; a drop in an ocean of need, but I always remind myself and our group that we are an important drop.

Outreach is an activity that is urgently needed because it teaches young scientists to communicate ideas clearly to non-scientists. Outreach is also important because it drags us out of our labs and we as scientists become more visible to the public, not just to the students but also their families and their communities. Sadly outreach is highly undervalued in the research science community; it does not produce papers, or if so papers of low impact, it brings in little money, and there is an understated idea that those who are not good enough to do research do outreach. It takes creativity and intelligence to meet the challenge of conveying the excitement and importance of science. Our philosophy is that science is everywhere and knowledge is a gift that cannot be stolen.

If you want to develop a program, I would make sure there is some way of valuing the time spent in outreach activities, especially if you are a young untenured professor. Learn how to write projects for funding and learn the culture of the school where you might work, sometimes they are not keen on having outsiders come in, it can be hard on the ego to have doctorate students teaching alongside a science teacher. I would try and remember your own childhood, what did you like in school, what drove you crazy in school. I clearly remember that when I was bored or the teacher was not very good I would skip class. I think there are basic principals, everyone is curious, everyone wants to look through the microscope, play with a computer, but the older you get the more it is bashed out of you. 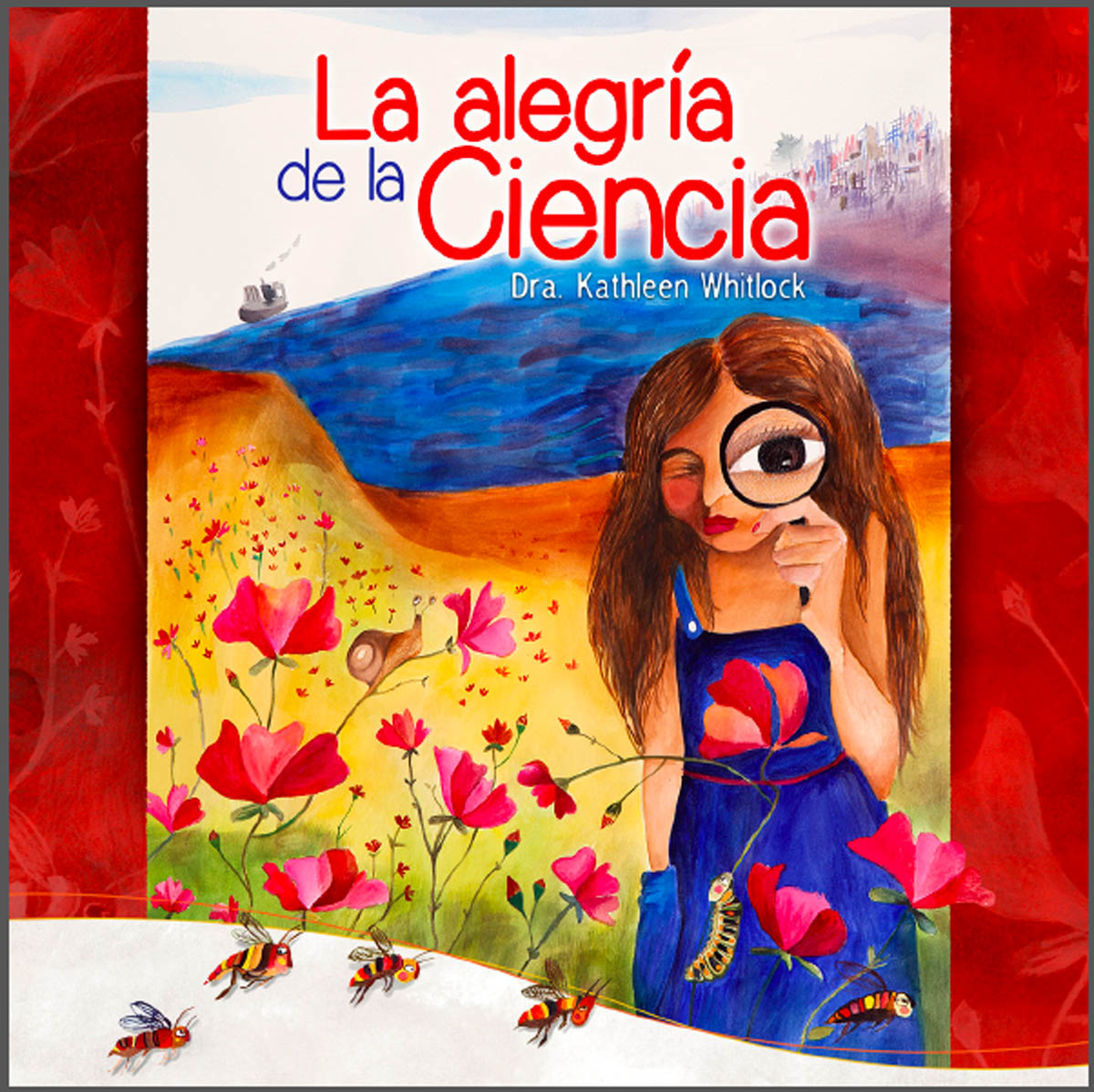 Finally, for those who might be interested, we will be publishing a book in the coming months (before the end of the year) called La Alegria de la Ciencia (The Happiness of Science) which has 12 of our most popular workshops. As a native English speaker I became aware that many of the on-line resources for science projects are in English. Most people, at least in Chile, do not speak English, or do not speak it well enough to understand the information on line. Thus the book is in Spanish; there is no English translation. It is a very pretty book with the workshops related to Chile and specifically Valparaiso. For example, Cata, our main character, ponders why the trolleys (electric) do not belch black smoke like the city buses. We have partial funding for the book so we hope to make it available at reduced cost, please write me (kathleen.whitlock@uv.cl) if you are interested. In addition the plan is to make an electronic version available through our website.