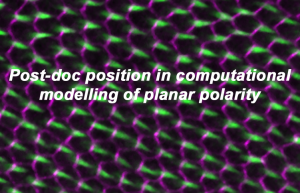 This Wellcome Trust-funded post-doc position is available to carry out computational modelling of coordination of planar polarity as part of an interdisciplinary team using Drosophila epithelial development as a model system. The Strutt lab (MRC Centre for Developmental and Biomedical Genetics, University of Sheffield) studies  the planar polarity signalling pathways that control coordinated cell polarisation in animal tissues. In collaboration with Prof. Nick Monk (University of Sheffield) we are now seeking to combine our biological expertise with computational modelling approaches, to build an integrated understanding of coordinated cell polarisation.

The post-doc will be involved in developing quantitative models to understand the effects of integrating collective protein behaviour and different regulatory mechanisms in the coordination of cell polarity, and to devise and assist in the experimental testing of such models. The work will build on existing theoretical models for coordination of cell polarity and incorporate quantitative data producedthrough analysis of conventional and super-resolution images of developing tissues in both the wildtype state and following experimental manipulation.

Informal enquiries may be directed to David Strutt (d.strutt@sheffield.ac.uk) or Nick Monk (n.monk@sheffield.ac.uk). Formal applications should be made directly to the University of Sheffield (http://www.sheffield.ac.uk/jobs Job Ref: UOS007732) by no later than the 16th January 2014.

Fischer, Houston, Monk & Owen (2013) Is a persistent global bias necessary for the establishment of planar cell polarity? PLoS ONE 8: e60064