This Spotlight was first published in Development.

The days of the solitary scientist toiling away within the isolation of the academic ivory tower are something of the past. This is not only true when actually doing science, as projects become more collaborative and global, but also when considering the relationship between scientists and the public. Science outreach is something that most of us may already be familiar with, and yet the perception that outreach is not for the committed scientist is still there. In many quarters, outreach is seen as an occupation for those who are transitioning to an ‘alternative’ career or for naturally gifted communicators. However, the economic crisis was a wake-up call to many. With governments all over the world cutting their budgets, and with public opinion playing a big role in influencing these decisions, it became clear that outreach is not just about helping the public gain some understanding of scientific concepts but it is also about ensuring that they appreciate why it is important and why governments (and hence the tax payer) should support it. In other words, we don’t just have a moral duty as scientists to inform the public but we have a very practical necessity to justify our activities to
those who fund our work.

For the uninitiated, communicating science outside academic environments can be a daunting prospect. Where to start? Where do you find an audience? What should you be communicating – basic concepts of biology or your specific research project? In late 2013 we launched a series on the Node dedicated to science outreach. This was an auspicious time to launch this series, as developmental biology outreach received an enormous boost as the focus of the 2013 Royal Institution Christmas Lectures, which were widely broadcast on the BBC (https://thenode.biologists.com/of-worms-and-womenreflections-on-the-life-fantastic-christmas-lectures-2013/events/).We had two main objectives with this series. First, to inspire our readers by showcasing the variety of outreach projects available, including tips and insights from the scientists and communicators involved. Second, we also wanted to provide a set of easy, tried-and-tested outreach activities (with step-by-step instructions) to make that first outreach experience a little easier (see Box 1). 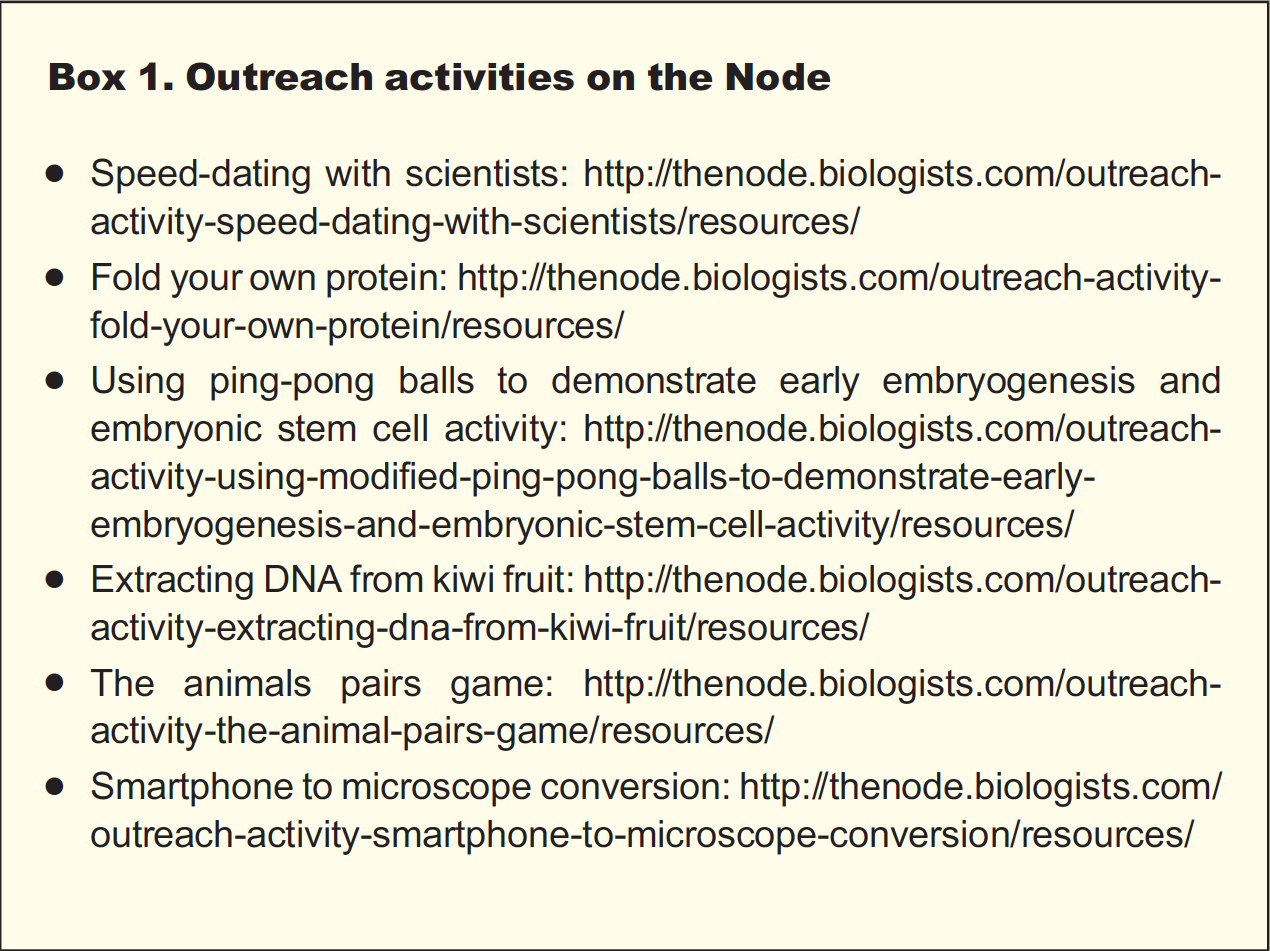 When first thinking about science outreach, table-top activities at departmental open days and science festivals are what many scientists have in mind. They are very good starting points. The department or festival organisers deal with the logistics, and these events attract a crowd of children and adults who are there because they want to learn – your audience is already interested and eager to be captivated. As a participant you only need to worry about your own stall, and our easy outreach activities (see Box 1) can be a great place to start. The post by the Biology Builders, a group of Nottingham scientists who organised a stall at the Royal Society Summer Science Exhibition, provides interesting insights into the challenges and rewards of outreach in this context (https://thenode.biologists.com/making-an-exhibition-of-your-science/resources/).

Another good way to get involved in outreach is by collaborating with local schools. There are many ways to bring science to school kids, and the key is to develop projects that take into account the social and economic context of the schools involved. Microscopes 4 Schools (https://thenode.biologists.com/microscopes4schoolshands-on-microscopy-for-children/education/) brings affordable microscopes to the already well-furnished Cambridge schools. Here the aim is to amaze children with the beauty of science and inspire a new generation of scientists. Ciencia al tiro (https://thenode.biologists.com/outreach-program-ciencia-al-tiro-scienceimmediately/education/) takes place on the other side of the globe, reaching out to some of the most deprived schools in Chile. The aim of this project is to reduce some of the inequalities of the education system and to provide extra support and attention to children who might not have many opportunities. Science is shown to be something very practical that can help daily life, by developing projects that teach concepts but also have practical applications, such as installing solar showers to provide hot showers to the children. The projects and activities help the children think outside their daily reality and hopefully inspire them to aim higher.

If a collaboration with a local school is not possible, there are other ways to reach school children. I’m a Scientist, Get me out of here (https://thenode.biologists.com/im-a-scientist-get-me-out-ofhere/resources/) is an online project in which scientists join online chats to answer questions from school children. You are faced with the usual challenges of outreach, such as the need to be clear without being patronising and the ability to deal with difficult questions. In addition, and in the fashion of the similarly named TV show, the scientist with fewest votes from the students is evicted at the end of each day. You must be fast as well as a good communicator!

Another way to influence how science is communicated in schools is by interacting with the teachers themselves. This is the mandate of the European Learning Laboratory for Life Sciences (ELLS), launched by the European Molecular Biology Laboratory (EMBL) in 2003 (https://thenode.biologists.com/embl-ells/resources/). This science education facility aims to train teachers, bringing them up to date with the latest discoveries, helping to bring molecular biology to the classroom and providing opportunities to interact and learn from research scientists.

Schools and science festivals are great ways to be involved in outreach, but the audience is already primed to learn and has an interest in science. How to reach those that are less likely to be inspired by what science has to offer? One way to reach a new audience is by choosing an object or topic dear to them. Mission Peluches (https://thenode.biologists.com/a-cuddly-science-outreachproject/education/) is an outreach project developed in France that is particularly popular with young children. The starting point is the soft toy, an object that every child has and is emotionally attached to. The children are encouraged to become naturalists of the toy world, classifying their soft toys as if discovering new species. Placing that soft toy in the context of others in the collection naturally develops into a discussion of the different mechanisms of evolution.

One notoriously difficult age group encompasses teenagers and young adults. The Gulbenkian Institute has found a novel way to engage with this audience by moving their outreach activities to where the young people are (https://thenode.biologists.com/sciencepowered-by-music-2/resources/). The institute is next door to the venue of one of the biggest music festivals in Portugal. By establishing a partnership with the festival’s organisers, the researchers at the Gulbenkian Institute organise a stall at the festival every year, reaching out to the unsuspecting music fans. The spirit of this project is similar to that of other outreach projects that are moving outreach to less formal settings, such as recent
efforts to bring science to pubs or bars (https://thenode.biologists.com/cosy-science-science-cafes-in-the-pub/events/).

One interesting activity developed by the Gulbenkian Institute as part of their activities at the music festival is the opportunity to ‘speed-date’ with scientists. This gives revellers the chance to discuss science one-on-one with a scientist. The most important aspect of this activity, though, is that it allows young people to realise that scientists are just normal people (especially when they have a drink in their hand, sun glasses on, and are as interested as you in the next act playing!). This highlights an important aspect of science outreach: it has wider objectives besides just teaching scientific concepts. Soapbox Science (https://thenode.biologists.com/soapbox-science-on-londons-south-bank-using-flies-to-fightcancer/education/) is another outreach project that aims to change the way that science is perceived, focussing specifically on women in science. Female scientists are invited to stand on top of a box in a busy pedestrian area and grab the attention of passers-by with an engaging presentation of their work. Part of the challenge is to get the attention of the audience, but this project is also unashamedly about showing that women have a role to play in science. Successful, enthusiastic women take the centre stage, showing young girls that science is for them too.

For many of us, the initial interest in science was not sparked by a specific concept but rather by a beautiful image or an unusual perspective. Bringing such moments to the public is also an important aspect of outreach. A research group in France (https://thenode.biologists.com/cellular-architectures-at-the-nuit-blanche-2013-in-paris/education/) aimed to do just that, and at quite a scale. They participated in Nuit Blanche, which is a big arts festival in Paris, by projecting videos of cells onto the façade of a 17th century building. This medium does not allow a complex explanation of concepts, but it is a fantastic way to share the beauty of science and spark the curiosity to investigate further. As the scientist behind this project stated: “curiosity and wanting to understand needs to be promoted as a value by itself”.

As you might imagine, adapting movies of cells into an excitingmusical show that is projected onto a building is not an easy task for a scientist, and close collaboration with an artistic company was an essential part of this project. The willingness to collaborate with experts in other areas can therefore be another important aspect of outreach (unless of course you have an academic background in both; for example, science and art – https://thenode.biologists.com/outreach-series-evo-devo-art/interview/). We must also be open to acquiring new skills. As scientists, we already have many of the skills required for successful outreach, such as the ability to speak in public, presentation and writing skills. However, these need to adapted and readjusted to a different audience (or several different audiences), and collaborations, in particular with professional science communicators, can help make that transition.

Improving and widening your skill set is just one of the many ways in which you can personally benefit from being involved in outreach. As the organisers of Cosy Science explained in their post, outreach “makes it easier to step back from day-to-day problems and see the bigger picture, question basic assumptions […] and think outside the box”. If you are lucky and a bit creative, your outreach project might even contribute to your research. Worms Watch Lab (https://thenode.biologists.com/worm-watch-lab-real-data-real-outreach/education/) is an example of a citizen science project (http://scistarter.com). Faced with the challenge of analysing hours and hours of C. elegans videos, a laboratory in Cambridge transformed this non technical but time consuming activity into a game that anyone can play. As a consequence, the public is entertained while learning about the science behind the game and contributing to a real research project.

As the posts already featured in this Node series attest, there are many opportunities to be involved in outreach, from joining an ongoing project to starting your own event, from organising a stall to broadcasting a radio programme (https://thenode.biologists.com/onthe-air-bringing-developmental-biology-to-the-radio/education/). Although it is true that efforts to communicate with the public remain mostly unrewarded in science, where publications are the only currency, there are signs of a new trend. In many countries, funding bodies are starting to require their grant applications to include a section on public communication, and the opportunities to apply for outreach funding are also increasing. There are even a few job positions in which outreach is not only encouraged but also an integral part of the job alongside traditional research (https://thenode.biologists.com/best-of-both-balancing-research-and-outreach/education/).

We hope, therefore, that this series, which is still ongoing, will be a good introduction to the exciting world of science outreach and that it may inspire and encourage those of you not already involved to step out of the ivory tower and give it a try.

3 thoughts on “Reaching out – the many faces of science outreach”