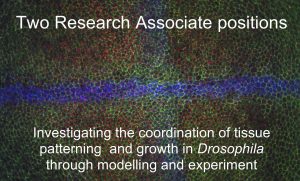 Two BBSRC/Wellcome Trust-funded positions at the University of Sheffield are available for candidates with a background in (i) cell and/or developmental biology and (ii) mathematical modelling to join an interdisciplinary team investigating the coordination of tissue patterning and growth using Drosophilaepithelial development as a model system.

The Strutt lab (http://www.shef.ac.uk/bms/research/strutt) is a world leader in studying the planar polarity signalling pathways that control coordinated cell polarisation in animal tissues. In this collaborative project with Dr Alexander Fletcher (http://alex-fletcher.staff.shef.ac.uk) we are now combining our biological expertise with mathematical modelling approaches, to build an integrated understanding of how tissue patterning and growth are coordinated to achieve consistent organ shape and size during animal development.

Informal enquiries may be directed to David Strutt (d.strutt@sheffield.ac.uk) or Alexander Fletcher (a.g.fletcher@sheffield.ac.uk). Formal applications should be made directly to the University of Sheffield (http://www.sheffield.ac.uk/jobs, Job Refs: UOS020789 and UOS020791) by no later than 4thDecember 2018.