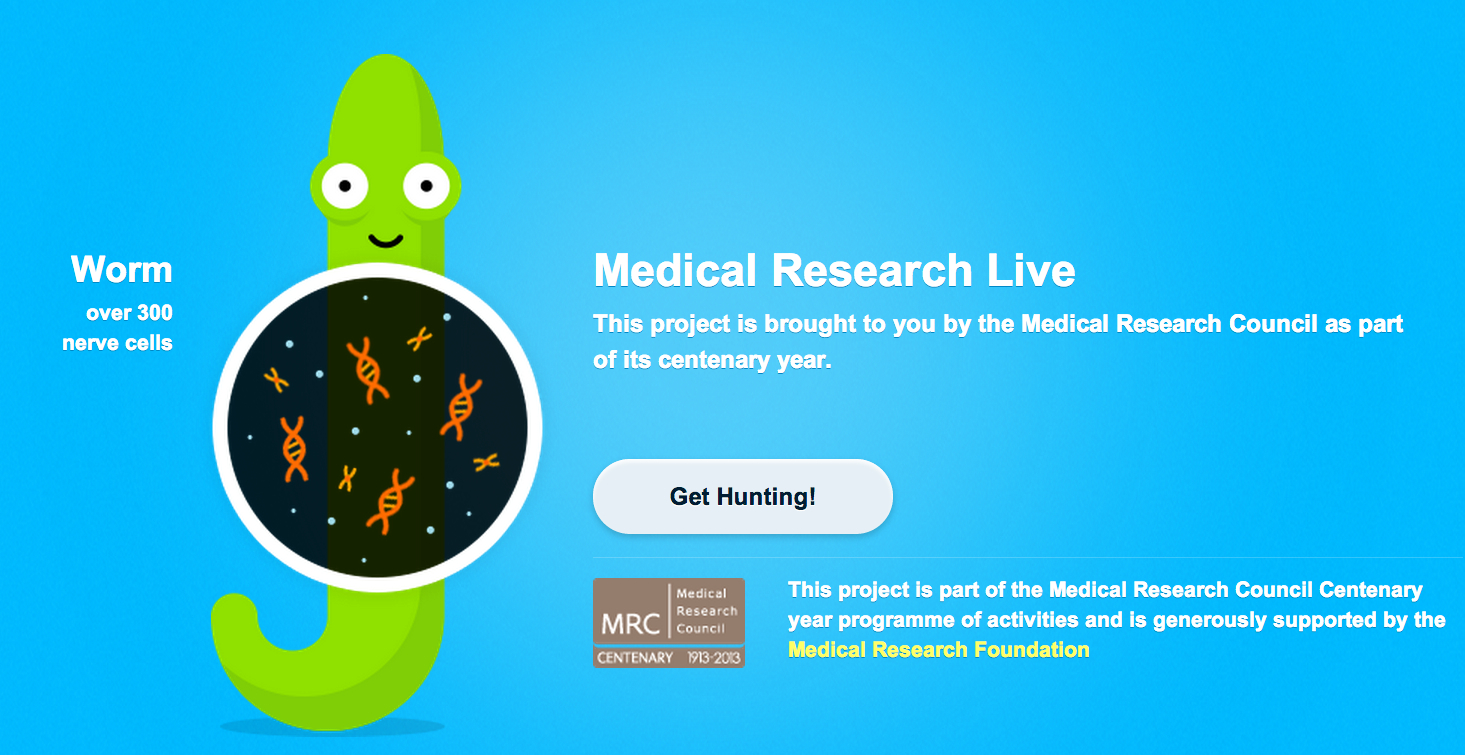 Most scientists have their hands full, and while public engagement sounds nice in the abstract, actually finding time to do it well can be a challenge. This is the beauty of citizen science: it’s not just outreach, it let’s you get data you couldn’t get any other way. Citizens are asked to help solve a real scientific problem, so researchers get data to advance their work and members of the public get to experience an aspect of current science. It can be a powerful form of outreach because it highlights the sometimes tedious and often addictive search for new knowledge that characterises real science.

My experience with citizen science started last year when the Medical Research Council solicited ideas for public engagement activities to be associated with the celebration of the MRC Centenary in 2013.

At the time, I was a postdoc in Bill Schafer’s lab at the MRC Lab of Molecular Biology in Cambridge working on automated methods for analysing the behaviour of the nematode worm C. elegans. It was important that the analysis was automated because we had the equivalent of a four-month worm movie that had been collected over the previous couple of years using eight tracking microscopes (the movie has a cast of about 12 000 worms from over 300 mutant strains). When it came to analysing worm postures and locomotion, we were doing pretty well, but there are other behaviours that are more challenging to train computers to see. Here’s a close-up view recorded by Robyn Branicky:

Studying the genetics of egg laying in worms has shed light on a whole host of conserved pathways and we wanted to find more. There we were, with hours and hours of videos of worms doing their thing, including laying eggs, but it was just too much for one person to go through it all manually. Fortunately, even in our tracking videos, the only training you need to identify egg laying events is to watch a couple of examples. When the MRC asked for outreach project ideas, we figured we had a perfect match.

The result was Worm Watch Lab.

From the start we were working with the fine folks at Zooniverse on the project. This was an excellent experience and I can’t emphasise enough what a difference it makes to work with professionals who really know how to do citizen science. If we had tried to do this ourselves, even if we had hired professional developers to help with the site, there’s no way it would have gone as smoothly or resulted in such a nice finished product.

In addition to the basic function of watching videos and identifying egg laying events, it’s also possible for worm watchers to tag and comment on videos if they have a question or find something interesting. You can see the latest examples at http://talk.wormwatchlab.org/. This has let us see which aspects of the task people find challenging but it’s also been an opportunity for me to see things I assumed were in the data set but had never actually seen, like uncoordinated worms sitting in a huge pile of eggs or videos with larval worms that had already hatched (#tinyworms and #baby are popular tags).

Worm Watchers have classified an impressive 115 000 short video clips so far, but there’s still a lot more work to do (I estimate we’ll need to do about 1 million classifications to complete the task, but I can’t be more precise because we don’t yet know how many times each video needs to be viewed to ensure accurate classification).

If you want to see how citizen science can work in biology or if you’re just in the mood to watch some worm TV, please give us a hand (or at least a few mouse clicks!) and feel free to ask any questions on the talk page: http://talk.wormwatchlab.org/.


Andre Brown is a group leader at the MRC Clinical Sciences Centre at Imperial College London.