The Gairdner Awards is Canada’s foremost international award, recognizing medical researchers for their work which has contributed significantly to improving quality of life.  There are five awardees each year and 76 of the 298 Gairdner awardees to date have gone on to win the Nobel Prize.

Lectures celebrating scientific excellence in medical research take place across Canada during the third week of October and culminate in Toronto with the Gairdner Awards lectures.  This year in Toronto, the Gairdner lectures kicked off on October 27 with an afternoon of lectures focusing on the eradication of malaria.  On the final day of the lectures, October 29, the Gairdner Symposium was held, highlighting research in epigenetics and genome function.

On October 28, sandwiched between the two outstanding sets of seminars was the main event – the annual Minds that Matter symposium with lectures by the 2010 Gairdner Awards recipients. The 2010 Gairdner International Laureates are:
Dr. William Catterall for the discovery of the voltage-gated sodium channel and calcium channel proteins and the elucidation of their function and regulation
Dr. Pierre Chambon for the elucidation of fundamental mechanisms of transcription in animal cells and the discovery of the nuclear receptor superfamily
Dr. William Kaelin, Dr. Peter Ratcliffe, and Dr. Greg Semenza each for his work in the identification of molecular mechanisms of oxygen sensing in the cell

Also giving lectures were the Wightman and Global Health Laureates.  Dr. Calvin Stiller is the 2010 Canada Gairdner Wightman Laureate, being recognized as a pioneer in organ transplant and diabetes research as well as an innovator in the Canadian biotech industry.  Dr. Nicholas White is the 2010 Canada Global Health Laureate for his research in the effectiveness of artemesinins in the treatment of malaria and elucidating the basis for the use of ACT to prevent resistance.

This year’s lectures covered topics from molecular biology to epidemiology, highlighting the importance of medical research in all fields of biology and health care.  The Gairdners will, no doubt, continue to bring to the forefront significant advances in medical research. 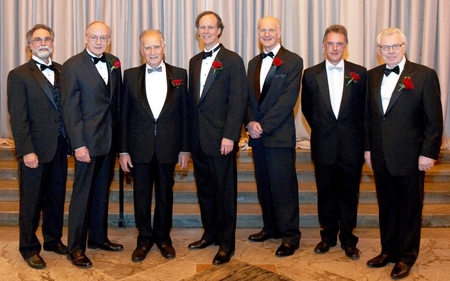