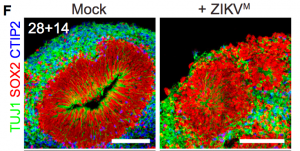 The Zika virus is making headlines as a major world health crisis linked to a host of neurological conditions. In the cases of microcephaly and Guillain-Barre, the evidence that Zika Virus is the root of the condition is strong enough to be considered causal. Babies born to infected mothers often have microcephaly, a condition that manifests in smaller than average head size and brain development. According to the most recent estimate, the babies of pregnant women infected in the first trimester have between a 1 and 13 percent risk of microcephaly. Guillain-Barre, a condition that can affect infected individuals themselves, is a disorder where a person’s immune cells attack his or her nerve cells. The list of neurological conditions potentially caused by Zika Virus infection doesn’t stop there: there have been case reports of other brain and spinal cord infections .

A new study examines the Zika infection in the brain on a cellular level. Xuyu Qian and his team at John’s Hopkins University used a 3D model of part of the brain to get a more accurate idea of how and where Zika infection occurs in brain. Their results indicated Zika infects a specific type of brain cell.

Until recently, researchers studied cells in the lab in a flat layer on a dish. However, this method did not provide an accurate representation of the complex 3D systems inside our bodies and the bodies of other organisms. Mini-organs, or organoids in scientific jargon, are 3D models of various organs that have burst onto the research scene in the past several years. To study Zika’s effect on the brain, the researchers made mini-brains, specifically modelling the part of the brain called the ‘forebrain.’ They created this mini-brain using ‘human induced pluripotent stem cells,’ which are cells reversed back into stem cell state from adult cells.

The image above shows a mini-brain that corresponds to the first trimester of human fetal development. The image on the left is the mini-brain not infected with the Zika virus and it shows the normal defined stripes, or layers of cells. On the right it the Zika-infected mini-brain, overall loss of structure, quantified by the researchers as reduced thickness of layers.

Using a 3D as opposed to a 2D model is specifically important for studying Zika in the brain because it allows us to see the effect of the virus on properties such as the formation of layers of cells, as well as the tendency to infect certain types of brain cells.