I am Serena Ding, a third year PhD student, and I work at the University of Oxford’s Biochemistry Department in the United Kingdom. I am interested in the control of cell divisions, specifically in stem cells. In Dr Alison Woollard’s lab, we use a microscopic nematode called Caenorhabditis elegans as a stem cell model.

C. elegans as a model organism

C. elegans are non-pathogenic nematode worms and a truly brilliant model organism. They are found in soil and rotten fruits all over the world. Our wild type worms came from a mushroom patch in Bristol, UK. The worms are small so you can keep ~1000 on a small Nematode Growth Media (NGM) plate like this. 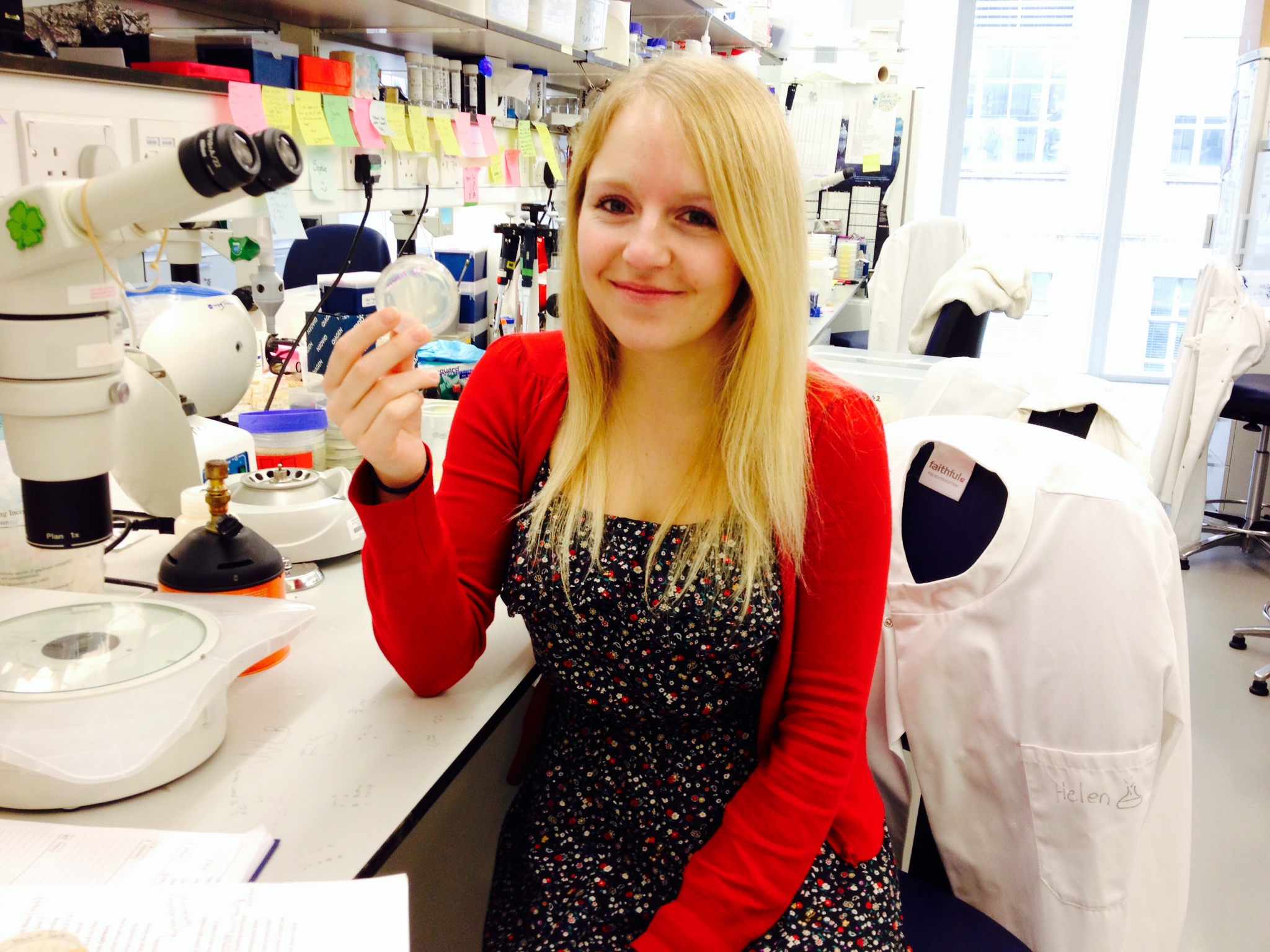 C. elegans naturally exist as hermaphrodites (99.99%) and males (0.01%). Hermaphrodites can self-fertilize and generate a clonal population, as well as mate with males for endless possibilities of genetics. Each worm can produce over 200 offspring in a few days so you will not have to wait very long to have lots of material to work with. C. elegans live for 20-30 days, with all the somatic cell divisions taking place over a 36 hour period, so from a developmental biology point of view, C. elegans presents an excellent opportunity to study complex developmental processes over a relatively short time window. Each worm has just under 1000 cells; the cell lineage is invariant and completely described, so it is possible to pinpoint exactly when and where things go wrong for whatever reason. This means you can study development at single-cell resolution within a whole organism. Last but not least, the genome has been completely sequenced and annotated, and there are many mutants available for various genes.

For these reasons, C. elegans is widely popular as a model organism. The biennial International C. elegans meeting is the biggest worm conference, attracting over 2000 scientists from all over the world working in areas such as aging, neurobiology, and regenerative science. There are various other worm conferences focusing on particular topics or on certain geographical regions. The C. elegans community is friendly and cooperative when it comes to sharing resources. The Center for Caenorhabditis Genetics (funded by National Institutes of Health) keeps a stock of strains that can be easily requested. WormBase is a fantastic online resource for C. elegans and other worms, which contains whole genome sequence, information on all mapped genes, upcoming meetings, forums to discuss topics such as “How many worms will fit into a Mini Cooper?” and so on.

In the laboratory we typically grow C. elegans on small NGM plates. We seed the plates with E. coli bacteria OP50 – we call this a “lawn” of bacteria – on which the worms feed. C. elegans happily lives at room temperature just on the lab bench, but depending on the experiment and other staging necessities, we grow worms at 12-26.5 °C in incubators. 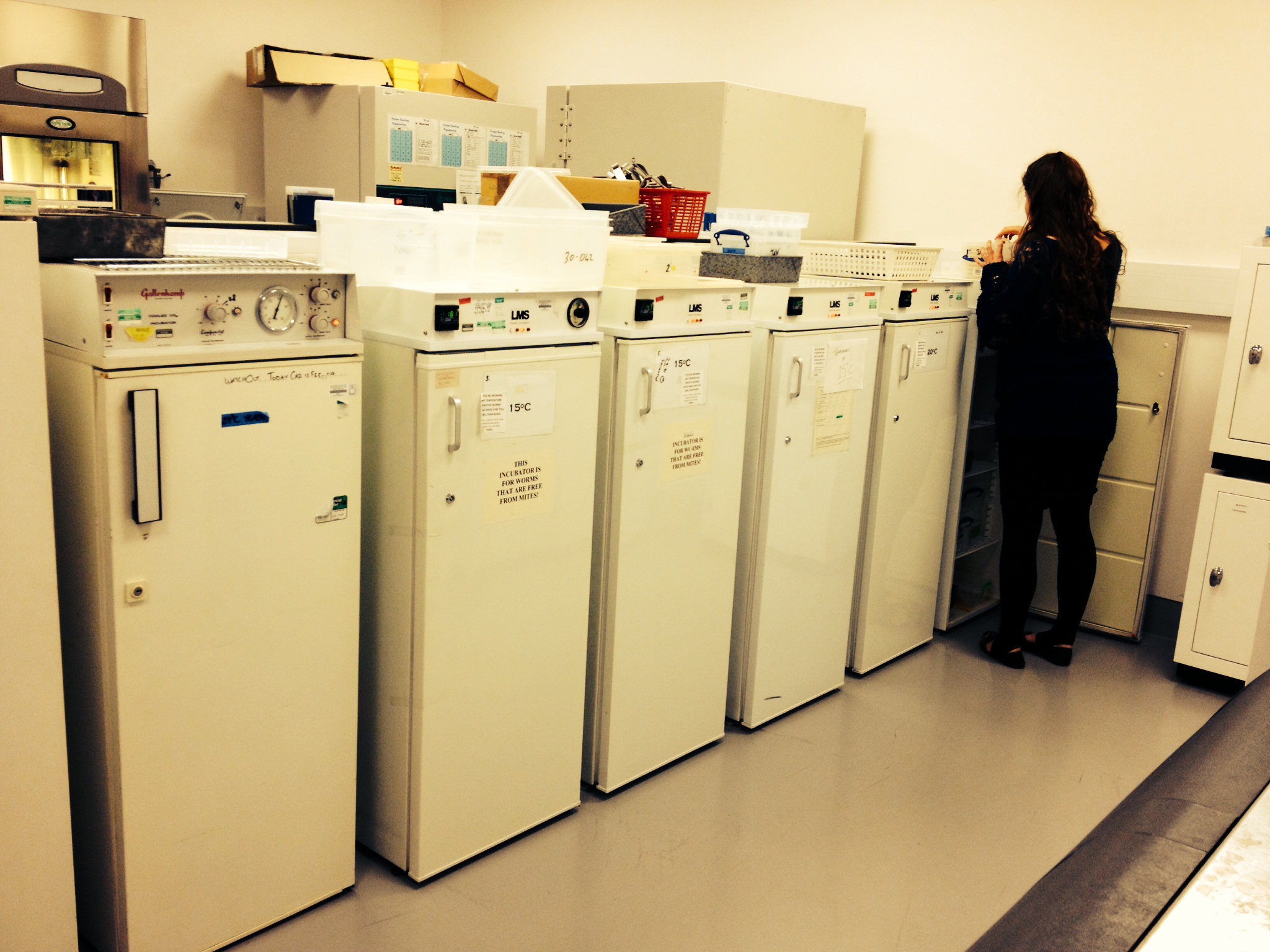 Below is a picture of what a worm lab bench looks like: lots of plates indeed to maintain different strains. Some people like to stack up their plates very high without tying them together with rubber bands (see the tower of plates on the right hand side), making their bench neighbors quite nervous about using a vortex mixer in case the tower collapses… 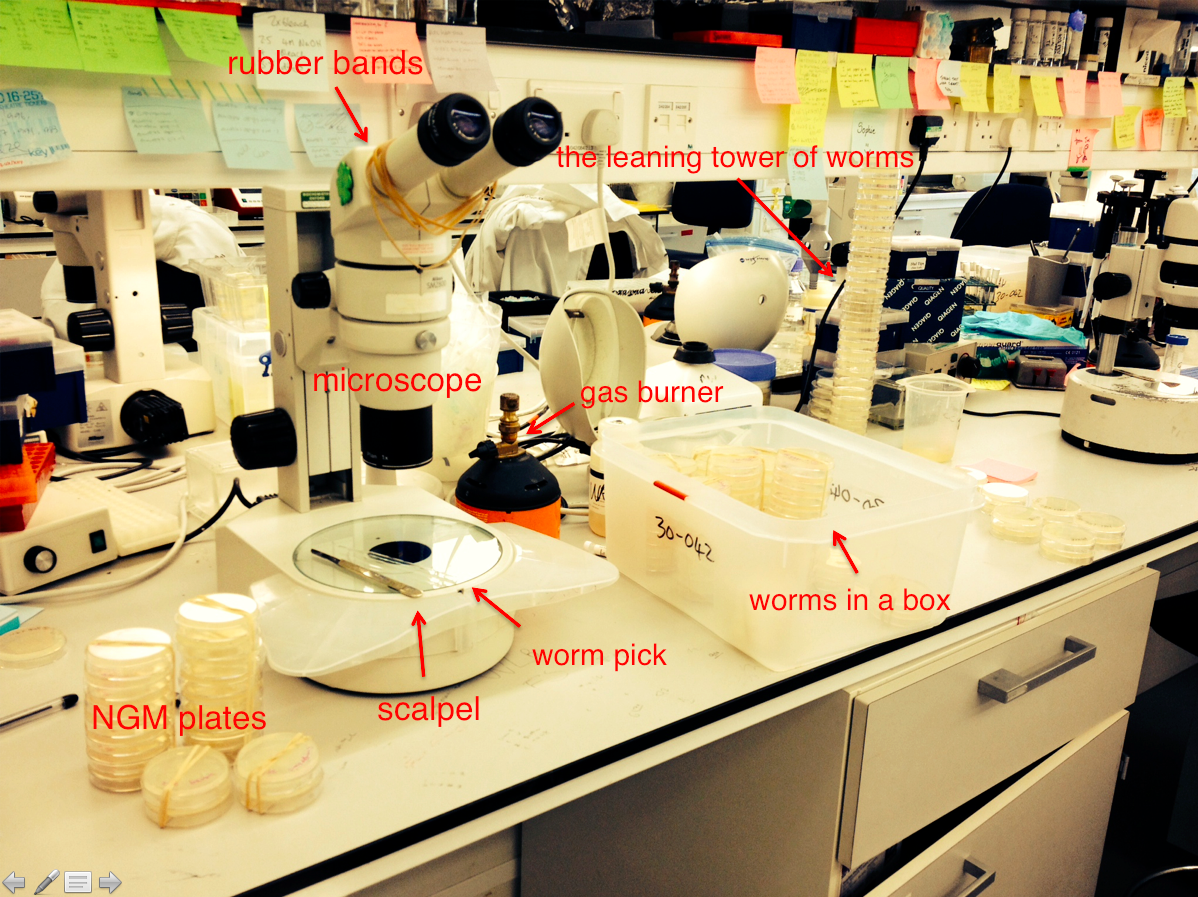 The plates do get contaminated at times, usually by bacteria or fungus and sometimes by mites. In this case we clean the worms either by frequent passaging to new plates or by bleach treatment. We can transfer worms using a worm pick, which is essentially a glass pipette with a piece of platinum wire sticking out of the top. We use a flame to sterilize the metal part before picking up a worm. Because platinum wires cool very quickly, we don’t have to worry about burning the worm. We make our own worm picks and everyone has different preferences – however, when the glass picks get dropped they do break, so it’s best not to develop strong attachment to a particular pick! Bleach treatment, on the other hand, works by killing the contaminants and bursting gravid worms open so they release bleach-resistant eggs, which are then retrieved and hatched. In addition to decontaminating, bleaching is also a handy way to synchronize a worm population, which is often necessary in order to study a particular developmental stage.

The worms self-fertilize and produce lots of offspring, so the plates get crowded quickly and run out of food. Therefore we “chunk” the worms once or twice a week by cutting out a small square of the agar with a few worms using a scalpel, and transferring it to a fresh new seeded NGM plate. If chunking wasn’t done in time and worms do starve, don’t worry, they go into a developmental arrest and can still live without food for months! As long as they have access to food later, they quickly recover and are happy again. Hence the worms are fairly low maintenance. We can also freeze strains in glycerol and store them in liquid nitrogen or at -80 °C for years.

RNA interference (RNAi) is a popular technique in C. elegans. RNAi libraries are commercially available and consist of bacteria containing clones that are designed to silence particular genes. It is easily performed in the worms: you select the feeding clone containing your gene of interest, grow it up in media and induce the expression of double-stranded RNA by IPTG, and let the worms feed on that bacteria – the rest is magic. However RNAi is inherently variable and behaves differently for different genes, so when mutants are available, people tend to prefer those instead. It is also not uncommon to using a combination of RNAi and mutants to study gene functions.

We regularly make transgenic worms using microinjection. We inject the DNA along with a selective marker into the gonad of young adults, and then look at the progeny for transformants and stable transgenic lines. A typical injection marker is unc-119. We inject unc-119 mutants, which are essentially paralyzed, with our desired plasmid plus the unc-119 rescuing plasmid. Then we look for progeny with rescued wild-type movement, which are the transformants. Some of the transformants will yield transgenic lines. This way, we can generate various transgenic worms, such as the one with fluorescent reporters below.

We sometimes integrate the transgenes into the worm genome afterwards to achieve stable expression. This is done by giving the worms large doses of gamma irradiation. Recently, new techniques such as MosSCI and CRISPR/Cas had been developed to allow for single copy insertion of transgenes into a precise locations of the worm genome, thus allowing for genome editing.

Microscopy is a common feature of developmental biology research, and C. elegans provides a myriad of opportunities for fascinating microscopic work given its transparency and the relative ease of generating mutants and transgenic animals. The worms are transparent so you can see right through the cuticle into whichever cells or organ you are interested in, and additional resources such as Worm Atlas provide great guidance to the worm’s anatomy.

No two days are the same, but as I arrive in the morning I generally chunk my worms and do some molecular cloning. After coffee and crosswords I may do some microinjections or set up some genetic crosses if I need to make new strains. Otherwise I spend lots of time on the microscope looking at various markers of cell divisions, both in the wild-type situation and in mutants/RNAi-treated worms to see what goes wrong. I leave work at the end of the day feeling tired but fulfilled, looking forward to return to my lovely little worms the next day!