I presume the first question that comes into people’s mind when they read the title would be “What are cnidarians?” I also presume a logical follow-up question would be “Why are you working on cnidarians?” If you haven’t asked these questions, I suspect that you are either my colleague and are sitting in the office next to me, or that you too work in the field of evo-devo.

We have all encountered cnidarians primarily in a non-scientific way, probably while swimming somewhere in the sea. And if the exposure was a direct skin-to-skin contact, there is a possibility that it wasn’t pleasant for the human participant. The unpleasant encounters are underpinned by the determining characteristic of cnidarians – the stinging cells (cnidocytes). Cnidarians are a phylum of metazoans, which separated from the lineage that gave rise to bilaterians more than 600 million years ago (Figure 1.). 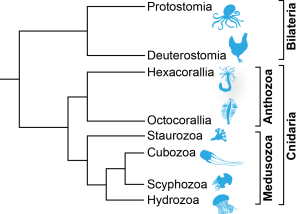 Today’s cnidarians include 5 classes, among which are the well-known sea anemones, corals and jelly fish. They are relatively simple animals, with only two germ layers (endoderm and ectoderm) and a small number of cell types. However, this morphological simplicity is deceptive, as it was recently reported that cnidarians possess a complex genome and a gene regulatory landscape that are comparable to any of the “higher” (although I prefer not to refer to them that way) animals, namely bilaterians. This intricate relationship of simple morphology and a complex genetic toolkit makes cnidarians ideal for studying the emergence of complex traits. The problems which interest the researchers in the lab of Uli Technau at the Department of Molecular Evolution and Development at the University of Vienna, Austria belong to some of the most fundamental questions in biology in general: the evolution of germ layers, left and right symmetry and nervous systems. The researchers in the lab come from different backgrounds – developmental biologists, molecular biologists, geneticists, zoologists. The variety of education of the researchers is what contributes greatly to the diversity of interests and topics. 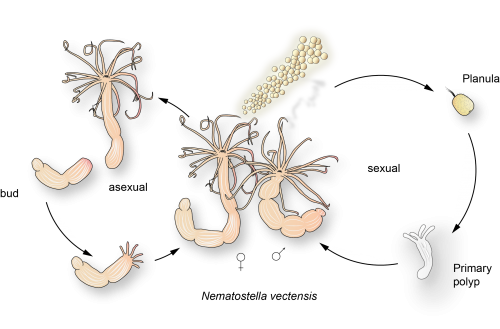 In order to tackle these questions most researchers in the lab use the starlet sea anemone – Nematostella vectensis (Figure 2.). This slowly evolving cnidarian proved itself to be one of the favourite cnidarian models, due to its willingness to be kept and to reproduce under laboratory conditions. Animals can be spawned at request, by using a combination of temperature and light setting changes and therefore provide us with fresh embryos every day. As our interest especially lies in the developmental origins of the previously mentioned biological basics it is crucial that we can access every stage of development easily. The enthusiasm with which Nematostella spawns in the lab has encouraged the development of techniques to work with it. The development of gene interference systems and transgenesis made work with these organisms much easier, but they still present somewhat of a challenge, because in order to close the life cycle (i.e. get the F1 generation), one must wait for 4-6 months (Figure 2). So do not expect quick results while working in the cnidarian field, but expect them to be very pretty…

A typical day in the cnidarian life for the researchers starts with coffee (I guess like in most research institutions all over the world), and for the animals with feeding and cleaning, and, for the chosen ones on that day, spawning. Spawning is induced, as mentioned before, with the combination of temperature and light change. The chosen animals are carefully washed the day before the spawning and put in incubators, which are timed to change the temperature and light. Usually the animals are kept in the dark at 18˚C, but the temperature in the incubators is 25˚C, and the light is on. We keep our animals in separate boxes for males and females, as to avoid any unplanned fertilization (very rarely the animals will spawn un-induced). After taking the animals out of the incubator, in about an hour to two they produce gametes. The females expel egg packages (eggs surrounded by a thick layer of jelly), and males release sperm into the water. Egg packages are transferred from female boxes into males ones and fertilization happens while you’re finishing your coffee. The embryos are collected, dejellied and one can then use them for any purpose. A very common technique that we subject our embryos to is microinjection. This is used to deliver all sorts of genetic goodies to the embryo: morpholinos, over-expression constructs, transgenic constructs. Most of us in the lab have spent several months trying to master this technique as it can be quite tricky. Especially since it is done in a relatively cold room (13-15˚C), which is not the most comfortable temperature for an almost motionless human being. But once you get there, it is quite satisfying (and maybe prepares you for a future job in human in vitro fertilization). 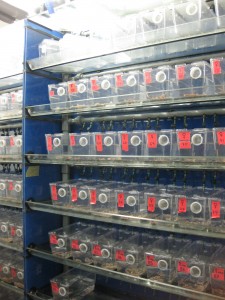 After fertilization (and potential microinjection), the eggs cleave and in around a day the embryos start gastrulating. After around a day and a half, the gastrula develops into a swimming larva called planula. After several days of swimming, the planulae settle down on the substrate to metamorphose into primary polyps, which develop 4 tentacles. The polyps start feeding, grow and develop more tentacles. The animals grows continuously and reaches sexual maturity around 4-6 months. Another interesting fact about Nematostella is that it is probably a very long lived animal with little signs of aging. As no detailed research has been done on this problem, there are a lot of open question left to address. Our animals are kept in a semi-automatic culture system in which the quality of the water is under central control (Figure 3., 4. and 5.). 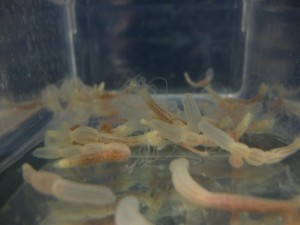 Figure 4 – Nematostella in its home in the culture box. 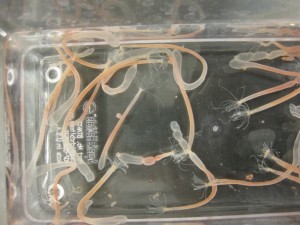 All of the animals are taken care of by our animal technicians and are fed Artemia shrimps (like zebrafish) – hence the slightly pink colour of the Nematostella polyps. They also take care that the animals are clean and that they do not overcrowd their boxes (since they are fond of their asexual reproduction, that does happen from time to time). In addition to Nematostella, our lab houses several other cnidarian species. The ones I believe would draw the most attention are the medusa stages of Clytia hemispherica (a hydrozoan) and Aurelia aurita (a scyphozoan). Aurelia aurita (Video) or the moon jelly is found in most of the world’s seas and you might have seen it live. But don’t worry, these guys don’t sting. The reason why they are so interesting, except for being exceptionally beautiful, is that they have a very elaborate life cycle. Medusozoans in general have a life cycle which alternates between a polyp and a medusa stage (although this typical life cycle underwent many changes during evolution, and some lineages completely lost either the medusa, or the polyp stage). The relationship and developmental dynamics of these life stages is also a question that interests some of the researchers in our lab. The lab houses some other cnidarian stages from time to time, usually only to obtain DNA or RNA from the poor things, as establishing a protocol for maintaining a new species in the lab, and especially for closing its life cycle is a hard and lengthy process. When I decided to work on cnidarians, I was attracted to the possibilities that these animals provide to study the characteristics of the ancestor of our lineages. They have been full of surprises and have shown us that this ancient group was much more complex than previously thought. So, whenever a cnidarian biologist has a tough time (which does happen quite often, unfortunately, as they tend to be uncooperative as any other biological system), it is enough to go and see your animals peacefully sitting or floating in water and their almost meditative influence will for sure ease a difficult day. Or just go and have a beer, there is always one in the fridge…

Young Aurelia aureate medusae. At the bottom of the dish ephyrae (“baby medusae”) can be seen.