Hello, my name is Cecilia Lara. I am an undergrad student working under the supervision of Dr. Mario Arteaga-Vazquez at the Laboratory of Epigenetics and Developmental Biology. Our lab is part of the Institute for Biotechnology and Applied Ecology at the University of Veracruz (INBIOTECA-UV). The INBIOTECA-UV is located in Xalapa, a rainy, damp, green and beautiful city in the heart of the state of Veracruz, Mexico. Its foggy nights remind you of those in horror movies where a huge guy with an axe can jump out of the bushes and chase you at any time! Right there in the south of the city is our little institute and our second home- the epilab (as we call it). At the epilab we study an emerging model, a liverwort called Marchantia polymorpha (Marchantia), which is a non-vascular plant that belongs to the most basal lineages of land plants.

Plants are fundamental for life in our planet. A major event in earth’s history was the colonization of the terrestrial environment by plants. Land plants (embryophytes) colonized terrestrial environments about 480 millions years ago. Bryophytes include the oldest extant land plant lineages (liverworts, mosses, and hornworts).There is an intense debate over the phylogenetic relationships between different bryophytes, mainly regarding which group is sister to either land plants or vascular plants, but evidence from the fossil record, molecular, systematic and phylogenomic data strongly suggests that liverworts were some of the first plants that colonized the landscape. This makes Marchantia a very interesting model to address many questions from an evolutionary perspective. For example: How did plants evolve from an aquatic ancestor? What kind of molecular and developmental innovations played an essential role during the evolution of embryophytes, resulting in the extraordinary radiation of land plants? What has been the contribution of epigenetic regulation during the evolution of land plants? This and many more questions can make more than one biologist lucubrate night after night!

The main goal of our lab is trying to understand the molecular basis, evolution and developmental implications of paramutation. Paramutation is the most amazing and extreme example of transgenerational epigenetic inheritance. Paramutation is an interaction between alleles (or homologous sequences) that leads to mitotically and meiotically heritable changes in gene expression. During the last decade we started to gain insight into the genetic and molecular mechanisms of paramutation. We now know that in plants, paramutation is mediated by components of an RNA-directed DNA methylation pathway that is involved in the epigenetic regulation of transposable elements. In our lab, we are studying the function and evolution of RNA-directed gene regulation in both Marchantia and maize. Our adventure in Marchantia started in 2009 when Dr. Arteaga visited Dr. John Bowman’s laboratory in Australia. Three years later he attended a Marchantia Workshop in Kyoto, where he officially established a collaboration with Dr. Takayuki Kohchi and Dr. Bowman, both pioneers of Marchantia research and leading the Marchantia genome sequencing initiative. This collaboration has extended to many other labs in Japan, including Dr. Kimitsune Ishizaki’s group in Kobe University and Dr. Katsuyuki T. Yamato’s group in Kinki University.

Marchantia plants are morphologically simple. They grow as a thallus (flat-sheet tissue reminiscent of leaves) (Figure 1) with rhizoids (single cell root-like filaments) growing on the lower surface and repetitive units adapted for photosyntesis on the upper surface. Marchantia reproduces both sexually and asexually. Asexual propagules (gemmae) are formed inside specialized structures (gemmae cups) (Figure 1) which are dispered by abiotic mechanical factors (e.g raindrops). 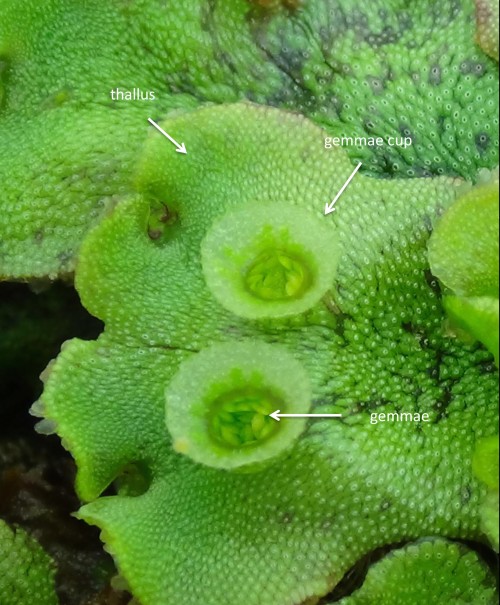 Sex in Marchantia is determined by the presence of cytologically distinct sex chromosomes, males having one very small Y chromosome while females have one X chromosome. The male and female thalli look alike, but they can be easily distinguished based on the morphology of the sexual structures they produce (Figure 2). Male antheridiophores (Figure 2A and Figure 3) or female archegoniophores (Figure 2B and Figure 4) arise from the upper surface of the thallus. Antheridiophores produce sperm-forming antheridia and archegoniophores produce egg-forming archegonia. In contrast to what is observed in angiosperms, sperm in Marchantia consist of a single motile cell capable of traveling in an aqueous environment towards the egg cell. The embryo resulting from a cross is enclosed in the gametophyte. It lacks an indeterminate meristem but grows a number of different cell types, including a sub-epidermal population of cells on the apical pole that correspond to the precursors of the germ cells that will undergo meiosis to form the spores. 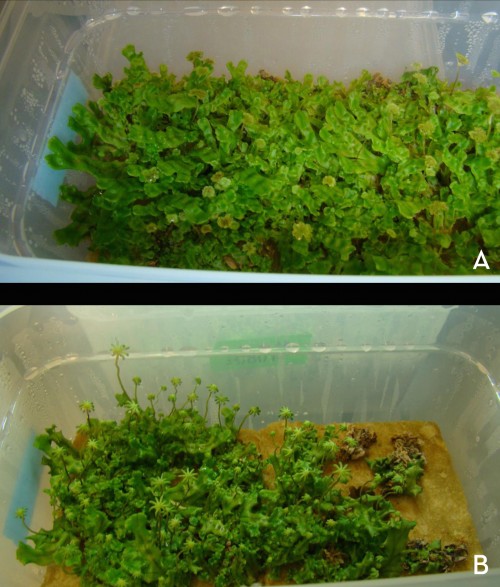 Figure 2. Marchantia male and female strains. Populations of male (A) and female (B) plants with reproductive structures already induced and ready to be crossed. 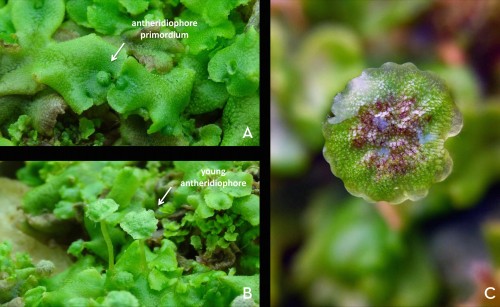 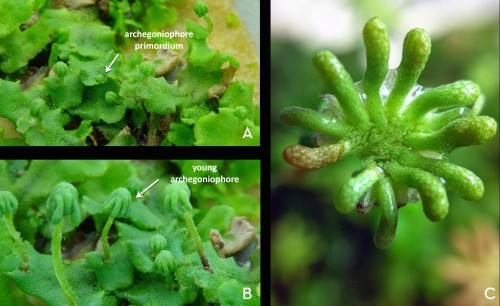 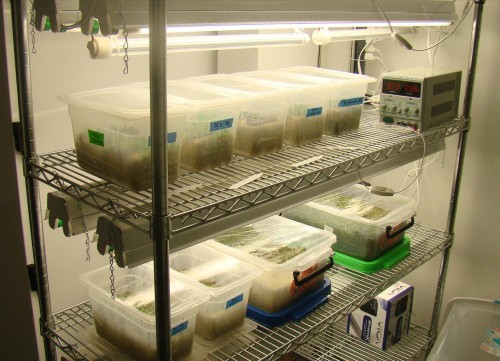 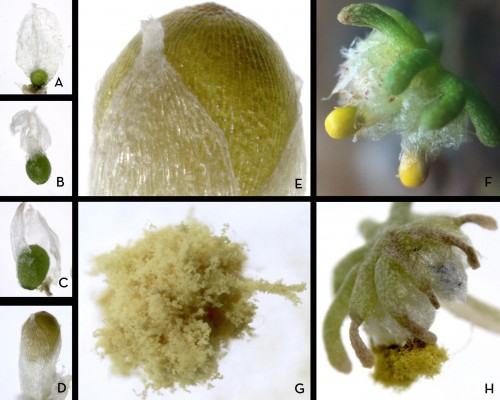 Genetic crosses are very easy to perform. A drop of water is incubated on top of an antheridiophore and after a couple of minutes the water will become cloudy. This is the sign to collect the drop of water (loaded with sperm) which can now be added on top of a developing archegoniophore. That’s it! You just made a genetic cross that will produce thousands of spores per sporangium.

How to perform genetic crosses in Marchantia?

A typical day at the epilab

A typical day in the lab starts with a 30 minutes walk from my house to the lab. Then I check on the plants, making sure they have enough water and that the AC unit is working properly. Xalapa is hot and humid most of the year so it is extremely important to keep the plants in an optimal temperature range from 20 to 22 °C. Marchantia grows nicely on a number of substrates including, vermiculite, turface (baked clay), ground brick, rockwool and it can also be grown in vitro in both solid and liquid media. Marchantia protocols including in vitro plant growth, induction of reproductive structures, cryopreservation and genetic transformation of spores have been developed by Dr. Kohchi’s group over decades of work. Recently, new protocols for genetic transformation of gemmae and thalli were developed by Dr. Yutaka Kodama’s group at the Utsunomiya University. This might sound like a cliché, but it is true, we are standing on the shoulders of giants.

During the last couple of months I have spent nights and days doing molecular biology benchwork, cloning genes and making all sorts of genetic constructs for my B.S. thesis. My thesis is part of a large scale comparative genomics project that involves the molecular characterization of small RNA-based gene silencing mechanisms in Marchantia. I am particularly focused on the characterization of the Argonaute gene family and the miRNA repertoire of Marchantia. One of the greatest features of Marchantia is that it is very easy to grow and to handle. You can grow large populations of Marchantia in very little space (Figure 2 and 5). My own special assignment in the lab is to keep our spore stocks safe and sound. For this, I select the most promising young antheridiophores and archegoniophores for crossing, and three or four weeks later I collect sporangia with thousands of spores that I dry and keep at either 4° C (if we plan to use them within a couple of months) or -80° C (for long term storage) (Figure 6).

I came to the epilab two years ago as a scholar of the Research Summer Program of the Mexican Academy of Science. I was and still am extremely excited to work with Marchantia. I have had the opportunity to learn a lot of things about plant biology, genomics, evolution and developmental biology. In spite of the ever changing weather and the ferocious population of arthropods (mostly mosquitoes) that populate Xalapa during the summer, this experience has been one of the most frutiful times in my life both academically and personally.

Marchantia polymorpha is rapidly developing into a remarkable experimental model with a powerful toolkit for comparative studies, molecular genetics and functional genomics thanks to the hard work of a number of pioneer scientists.

If you are interested in our work just visit the epilab webpage: epilab.weebly.com