I am James Lloyd and have just finished my PhD at the University of Leeds, UK working with Prof Brendan Davies (plant developmental biologist) and Dr Andrew Cuming (moss biologist).

Moss is a plant, a fact that some people I eat lunch with refuse to believe. It is sometimes called primitive. While moss does look like plants that exist in the fossil records and lived hundred of millions of years ago, it has been evolving during this time, so what is true for modern moss might not have been true of ancient plants. But moss is very useful in comparative studies, allowing us to gain an insight into the evolution of developmental processes and assess how ancient they are.

To keep moss happy in the lab, we grow it on agar plates with a defined medium in a room with continuous light at 25 oC. Here, a whole plant (often called a colony) will grow from a single haploid spore or a ‘spot’ of moss tissue. Any part of a moss plant can regenerate to form a new moss plant on standard media, making it easy to routinely subculture moss. The main body of the plant is haploid, in contrast to animals and vascular plants, in which most tissues are diploid.

A moss plant consists of filamentous tissue (protonemata), which are great for studying polar tip growth in plants. These filaments branch and eventually some of these branches become leafy shoot-like structures called gametophores (see photos). At the base of these gametophores, filaments called rhizoids grow and anchor it in the agar. 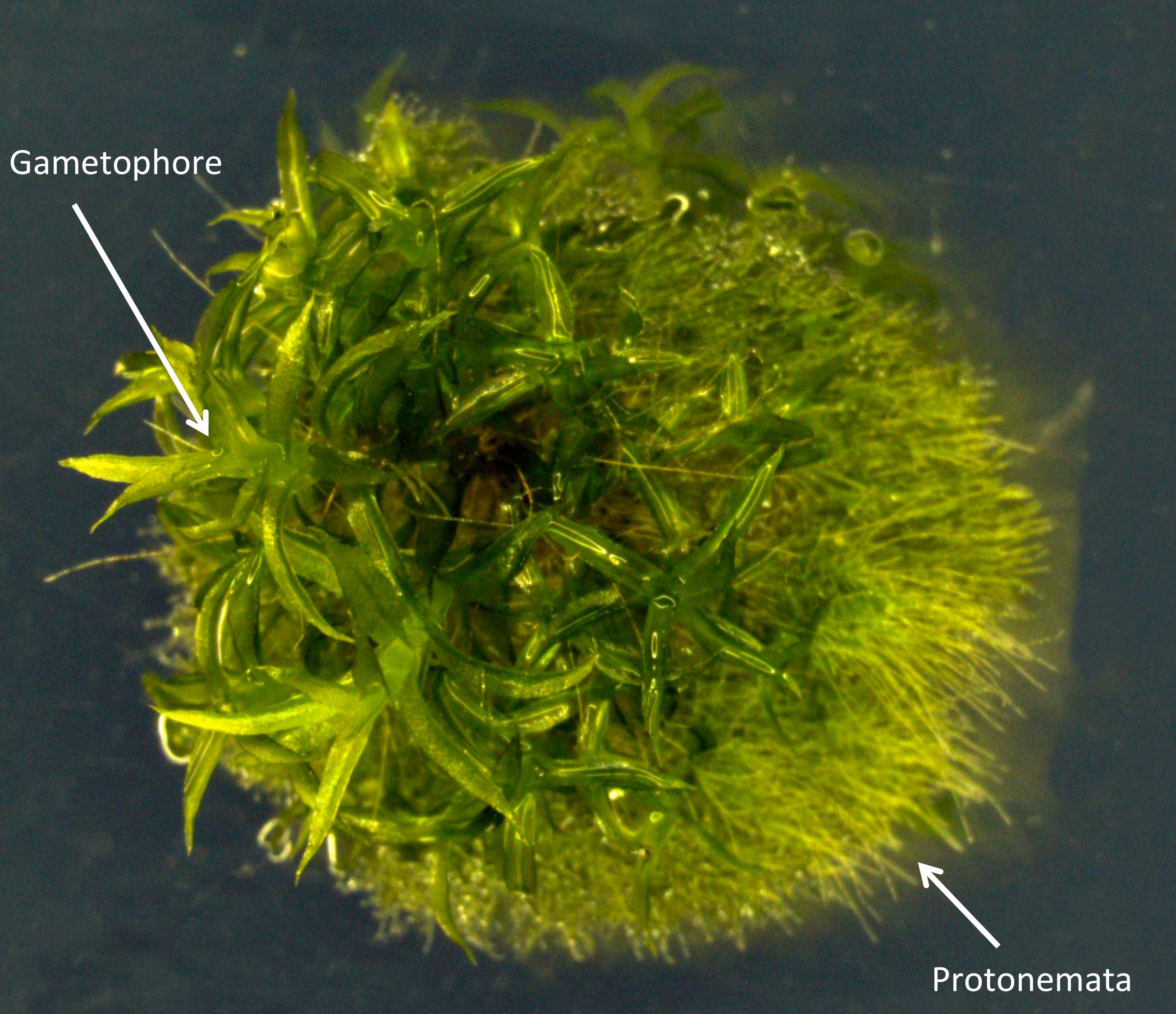 Photo of moss by James Lloyd University of Leeds

Moss can take months to go through the full life-cycle but only takes about three weeks to produce fully expanded colonies with large gametophores, which can be studied. If you are brave enough to go through the whole life-cycle (as moss will regenerate any tissue, you do not always need to bother unless you want to phenotype the diploid tissue), you can grow moss in short day conditions (8 hours light, 16 hours dark) while being cooled to 16 oC stimulates production of the reproductive organs at the apex of gametophores. A few drops of water will then allow the water-dependent sperm to swim and fertilise egg cells resulting in the appearance of a small diploid structure at the apex of a gametophore. Inside this ‘sporophyte’, meiosis will occur and many new haploid spores will be produced.

Moss is a user-friendly model plant. It mostly sits there on a Petri dish, photosynthesising. Moss could almost be thought of as the yeast of the plant kingdom because it is grown on defined media but can also have genes knocked out at will using homologous recombination.

While most plant researchers wanting to study mutants of their favourite gene need to make RNAi knockdown lines or hope someone has randomly hit that gene with a point mutation or transposons/T-DNA insertion, moss researchers can ‘easily’ make their own knockout mutant lines. Flowering plants have to low a rate of homologous recombination to make this feasible, but it would greatly improve GM strategies. You could even knock-in tags or mutations in to your favourite genes, in case a full deletion isn’t appropriate. Just clone around one kilobase of DNA from upstream and downstream of the gene you want to knock around an antibiotic selection gene and you are away.

A day in the life of a moss researcher can vary a lot depending on if you are transforming moss with your knockout construct you have just made or if you are sub-culturing it or simply pulling the plant apart to phenotype. Generally moss is happy to be left alone for a while and can be easily manipulated in a molecular lab. To collect filamentous tissue for phenotyping or transformation, moss can be homogenized or blended (click in the photo below for a bigger image).

Moss is a useful model to understand how plant development has evolved over the last few hundred million years and the basic mechanisms underlining some growth forms such as polar tip growth could be better understood. Moss also has its uses in better understanding processes common to all plants. Animal researchers have used multiple, evolutionarily distant model organisms for years, which has helped better understanding in many processes as different models have their own advantages and disadvantages. Moss has many advantages over the flowering plant model Arabidopsis thaliana, such as easy to generate gene knockouts and easy of propagation of tissue. Studying moss can reveal insights about basic pathways (such as RNA decay) in plants that were not apparent from studying A. thaliana alone. Sometimes what is true for moss is true of rice, but not of A. thaliana. 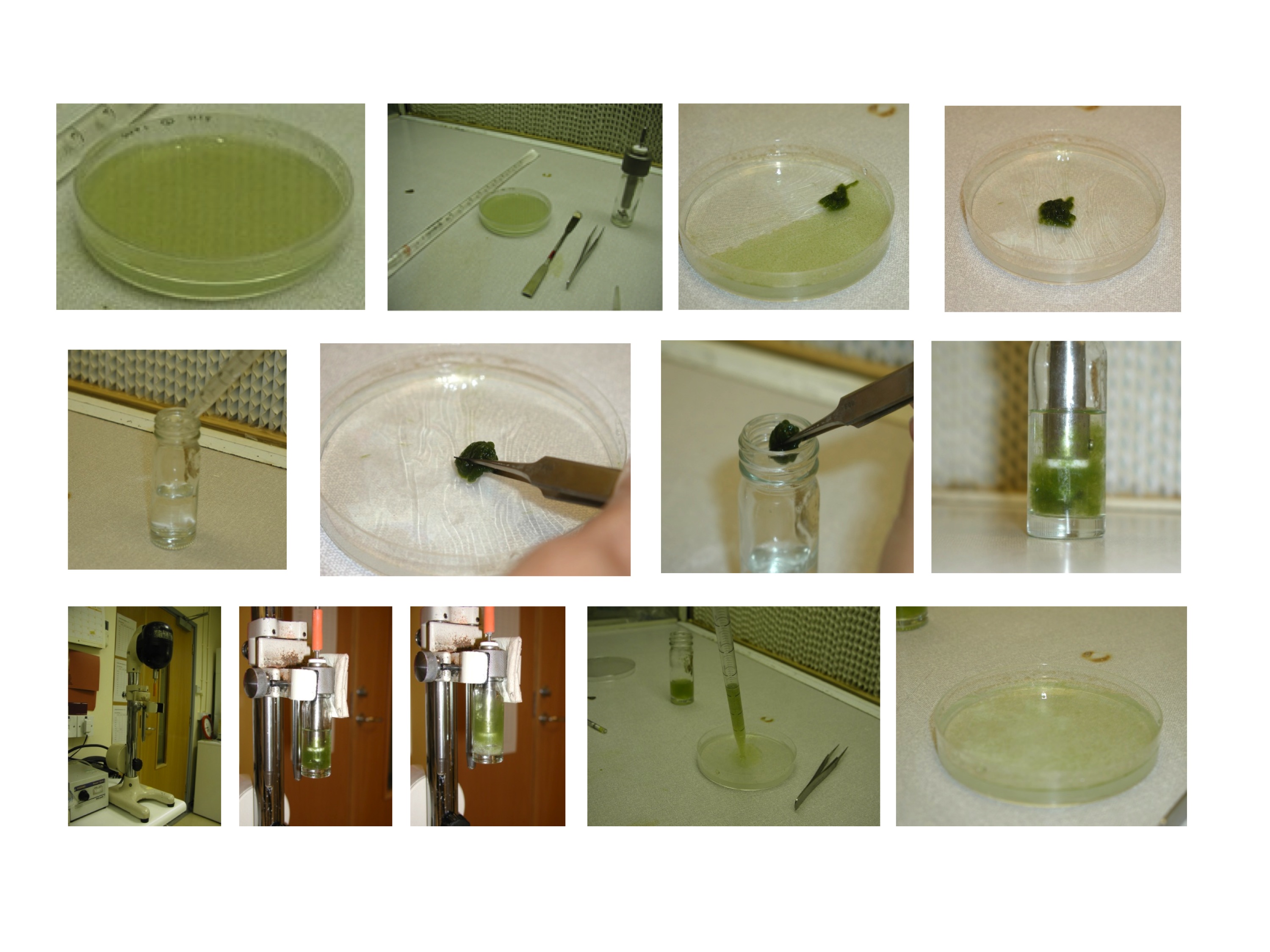 How to homogenise moss by Dr Andrew Cuming University of Leeds

Thanks to Dr Barry Causier for proof reading and Dr Andrew Cuming for moss homogenising photo.