Hi! I’m Tanvi, a third year PhD student in the Ettensohn Lab at Carnegie Mellon University in Pittsburgh, Pennsylvania, USA. The big question our lab is concerned with is how the genome encodes morphogenesis. We use transcriptional gene regulatory networks as a tool to study how transcription factors and signaling pathways regulate the expression of downstream genes involved in developmental anatomy. We use the sea urchin embryo as a model system as it is remarkably well-suited for regulatory network analysis and is a wonderful system for studying cell behaviors during development. The sea urchin embryo has a relatively simple morphology and is composed of only 10-12 different cell types. Large numbers of synchronously developing embryos can be obtained easily, and several specific cell types can be isolated relatively easily in large quantities. Just as importantly, these embryos are transparent and detailed cell behaviors can be observed in vivo, either during normal development or after different kinds of molecular manipulations, such as gene knockdowns. Detailed gene regulatory networks have already been established for various cell types of the embryo. The Strongylocentrotus purpuratus, or purple sea urchin, genome has been sequenced and a high quality transcriptome profile is available for different developmental stages. The genomes of several other echinoderms are at different stages of assembly and provide a terrific resource for comparative studies.

Our lab works with two different sea urchin species – the purple sea urchin, which is maintained at 15˚C, and the green sea urchin, which requires a warmer 23˚C. Both species are kept in temperature-controlled seawater tanks that are well-aerated and clean. The graduate students of the lab do most of the routine maintenance such as handling incoming urchin shipments, cleaning tanks, checking salinity and ammonia levels, feeding the urchins, and fishing out dead animals from time to time. Our extremely handy advisor deals with occasional tank breakdowns. 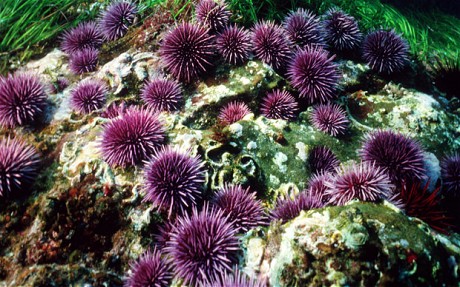 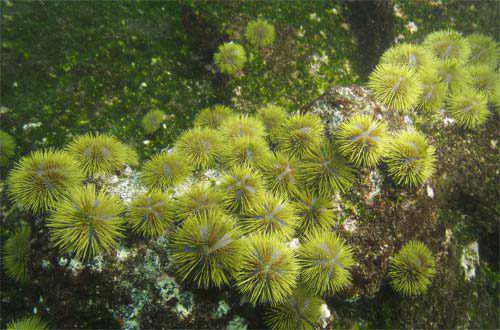 We receive our adult sea urchins from California or Florida, depending on the species. When we need urchins, we simply send an email to a commercial supplier and a few days later we receive FedEx boxes containing fertile sea urchins cooled on ice! The urchins tolerate overnight shipping fairly well, but some release their gametes (or “spawn”) along the way. This could be a mild annoyance or a nightmare depending on how many animals spawn. Once the urchins arrive, we place them in separate cups (usually old yogurt containers) with seawater and float them on the tanks. We change the seawater every few hours. This acclimates the urchins to the tank temperature and water and minimizes stress. Any urchins that may have spawned require additional water changes and are kept isolated until they stop spawning. 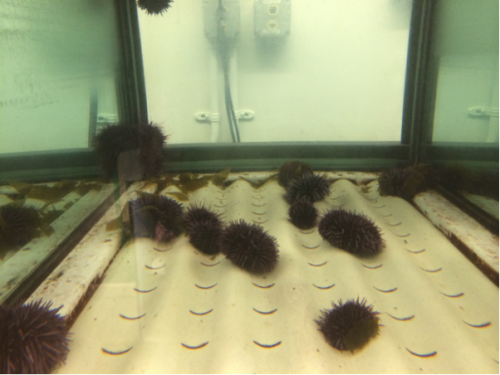 After 6-8 hours, when all the urchins are stable, they are transferred into the tank.  It is absolutely essential that urchins placed in the tank are not actively spawning, since seawater containing gametes (even a small number) will induce mass spawning in all the urchins! The next morning, I check on the tanks with fingers crossed, hoping that the urchins have not all spawned and died in a cloudy smelly mess at the bottom of the tank (this happens only rarely but is even more unpleasant than it sounds). The task of transferring newly arrived urchins to the tank is shared within the lab, which greatly reduces the stress and anxiety associated with it!

A day or two later, the urchins are delightfully low-maintenance. They cling to the walls of the tank and stay more-or-less stationary until we pluck them out to collect eggs or sperm. They can survive without feeding for many weeks, but we feed them sea kelp to keep them happy and full of gametes. 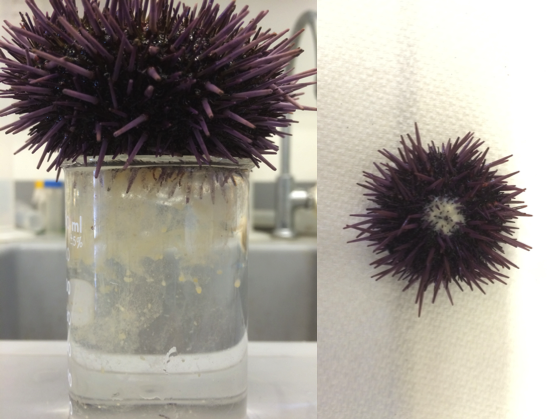 I work with embryos of the purple sea urchin. I usually work on embryos at the early gastrula stage, and set up embryo cultures about 24 hours before my experiment. Collecting gametes is a simple matter of shaking the urchins vigorously. This stresses them and causes them to release a fraction of their gametes, which I collect “dry” (sperm) or “wet” (eggs). I then plop the urchins into floating cups and later transfer them back into the tank. If I need more gametes than they provide willingly, I inject them with a 0.5M KCl solution, which induces them to shed all their gametes. Unfortunately, they usually do not survive this treatment. It is impossible to tell male purple sea urchins from females from external morphology alone, so picking the right urchin out of the tank is a matter of chance. I usually don’t need to go through more than 3-4 urchins before getting both eggs and sperm. The yield of gametes can be as high as a whopping 10-15 ml of eggs and 1 ml of sperm, if the animals are ripe. Sperm stays fresh for one week at 4˚C, which is convenient. Eggs are usually used the same day but can be stored overnight at 4˚C.

To set up an embryo culture, I simply mix eggs and sperm in a glass bowl filled with seawater! A small drop of sperm is more than enough to fertilize ~1 ml of eggs. This would, theoretically, give me about 1 million synchronously developing embryos! I check the culture under the microscope to ensure that almost all the eggs are successfully fertilized and then cover the bowl and keep it at 15˚C for 24 hours. The culture needs no maintenance and the embryos do not need to be fed unless a developmental stage later than the 72-hour larva is required.

The next day, I start my experiment by checking on the embryos. A good culture will have embryos that have developed synchronously with a morphology characteristic of their developmental stage. The culture may not develop well if the embryos are too concentrated or the quality of the eggs was poor. When the embryos reach the desired stage, I collect them by spinning in a clinical centrifuge.

My current experiments involve isolating a specific cell type of the embryo, the primary mesenchyme cells (PMCs), which build the embryonic endoskeleton. For this, I collect large amounts of 24-hour embryos and subject them to various washes using embryo-dissociation solutions. The embryos can withstand the mechanical forces of repeated centrifugation, which makes my life very easy! I separate the primary mesenchyme cells from other embryo cell types using a simple sucrose gradient. I am usually able to quickly isolate large amounts of PMCs. It is exceptionally rare to be able to isolate a specific population of early embryonic cells in such large quantities! The PMCs remain viable in culture for days, and carry out their developmental program autonomously. Needless to say, isolated PMCs have been an extremely useful model for me to study the development of a specific cell lineage. I am interested in understanding how genes involved in the morphogenesis of PMCs are regulated at the transcriptional level. I have been able to identify hundreds of genes differentially expressed in PMCs at the early gastrula stage using isolated PMCs. I am now working towards locating cis-regulatory elements mediating the expression of these PMC-enriched genes. My ultimate goal is to construct a detailed and comprehensive gene regulatory network that will explain how PMC morphogenesis is encoded in the genome.

Other lab members routinely set up and use embryo cultures for many interesting experiments involving injection of morpholinos or DNA constructs, transplantation or removal of various cell types, drug treatments to block certain developmental pathways, in situ hybridizations to analyze spatial gene expression patterns, and other kinds of experiments. The ease of working on sea urchins enables us to spend less time worrying about obtaining embryos and more time focusing on uncovering the mysteries of development!