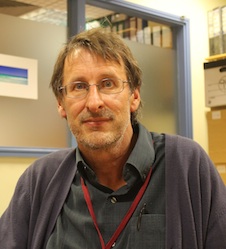 An interview with Roger Barker

Roger Barker is Professor of Clinical Neuroscience at the Cambridge Centre for Brain Repair, and one of the authors on a recent Development paper from Elena Cattaneo’s group in Italy, about the derivation of functional neurons from human stem cells. EuroStemCell has published a range of videos by several authors involved in this paper, but here we spend a bit more time with Roger Barker to talk about his international collaborations and his work looking at verification of stem cell-derived neurons.  One of the questions is from his EuroStemCell video interview (conducted in collaboration with the Node), and the other two are unique to the Node.

What was your role in this project?

The work that I’ve been doing on this paper with Elena Cattaneo is to look at the normal development of the human striatum. The striatum is particularly important for the work that I do, because the early pathology of Huntington’s disease is found within that structure. Ultimately, what we’re trying to do is to replace the striatal cells, which are lost as part of Huntington’s disease, by some equivalent – whether it be from a stem cell source or a fetal source.

Elena has been very keen to make these cells from a stem cell source and to validate that the cells you get at the end look like the cells that are there in the original state, we’ve looked at the normal development of the human striatal system. This has involved collecting human fetal tissue at different ages and then staging it and staining it for a series of markers to show when the transcription factors and other markers come on as the striatum normally develops. The earliest stage we got was 3-4 week old human fetuses, which then extended up to 11-11.5 weeks. By verifying those markers in normal human development and correlating them with what you see in striatal cells derived from stem cells, you can say whether they are actually one of the same.

Elena Cattaneo’s lab is in Italy, and you’re in the UK. What is the benefit of such an international collaboration in work like this?

One of the great challenges with doing work on stem cells across Europe is the different political landscape in the different countries where the work is actually done. I’m part of a consortium called NeuroStemcell, which links groups of scientists in the United Kingdom with people in Sweden, Germany, and Italy, and is able to allow for valuable human tissue and stem cell expertise to be brought together efficiently across the EU. Of course each country has its own agenda and its own rules with respect to work on fetal tissue and stem cells, which can make this type of work difficult at times.  I also lead a Europe-wide transplant programme for Parkinson’s disease called Transeuro, which is bringing together groups from Germany, France, Sweden, Austria, and the UK to develop a treatment method for Pakinson’s disease using human fetal tissue. Again, there are huge differences in the regulation and use of that tissue between countries.

So on the one hand you have this great ability to bring expertise together across Europe, with all the complementary techniques and abilities to really crack key questions, but you also have to do that in a regulatory context that can make it extremely difficult. One of the outputs from NeuroStemcell, for example, may be to develop a cell therapy from an embryonic stem cell source, which could not then be necessarily used in all the countries in which it was actually developed. But the advantage of NeuroStemcell is that you have this amazing capacity to link resources. In this particular paper, the group in Italy, led by Elena, have such fabulous expertise in developing striatal neurons, but their lack of access to human fetal material makes it very difficult for them to do the project without collaborating with a lab like ours, in a country that does have access to fetal material.  So these are truly international collaborations and without either party the project wouldn’t happen.

How does this work compare to other studies in the same field?

This is a pretty major study, because people have been trying to develop protocols to take human embryonic stem cells through to striatal DARPP-32-positive neurons for a while. Of course, as in a lot of areas in this field, people always make claims that they’ve achieved this, but often the data are not quite as robust as they first seem.

In the early days of stem cell biology, verification of the final cell type derived from a stem cell usually only involved testing for a single marker, but now the requirements extend beyond this. Now one wants to see that the cell not only expresses the marker that you’ve defined as being of paramount interest, but all the other markers which are evidence that the derived cells is equivalent to the mature native cell. This is where the developmental study we’ve done with human fetal material is very helpful as it shows that the stem cell derivatives follow and express all the markers found in normal development. In addition it is also necessary to show that the derived neurons are electrically active in a way that you’d expect and has the neurophysiological signature of the cell we’re interested in- in this case DARPP-32 striatal neurons. Finally it is important to show not only that the cells look neurophysiologically, developmentally and anatomically like their host equivalent, but that on grafting they can be integrated into a circuit in the appropriate fashion.

Trying to make these striatal cells has been a major challenge in the field. There was a paper either earlier this year in Cell Stem Cell in which the authors claimed that they had produced a similar cell to the one that we have in this paper.  I think, again, that the extent to which it is exactly the same as the type of cell we’ve produced is debatable.

These type of verification experiments are very important, because there is now a great desire to try these cells in clinical trials, but we only want to do that if we’re absolutely convinced that the cell we have is the cell we think we have.