Established  by the British Society for Developmental Biology (BSDB) in 2014, The Gurdon/The Company of Biologists Summer Studentship scheme provides financial support to allow highly motivated undergraduate students an opportunity to engage in practical research during their summer vacation. Each year, ten successful applicants spend eight weeks in the research laboratories of their choices, and the feedback we receive is outstanding.
Our second  report from the 2016 class comes from Lauren Miller, who undertook her project with Richard Poole in UCL.

The C. elegans dilemma: should I stay or should I go? 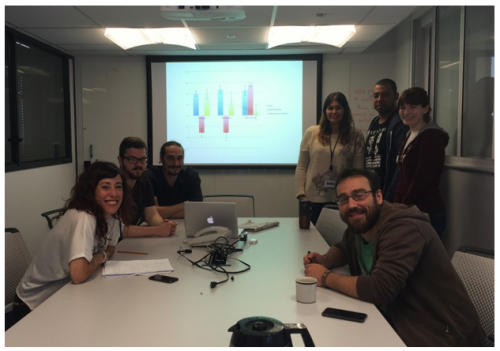 After being awarded the BSDB Gurdon Summer Studentship, I entered the lab with the enthusiasm that only an undergrad who has never spent 12 hours looking down a microscope can possess, and the surety that I was going to discover something. I then spent the next month failing to get my assay to work, which I feel gave me a much healthier perspective of the kind of dedication this whole “discovering” thing was going to require. Happily though, after another couple of months, I did manage to produce some interesting data!

Nervous systems are incredibly interesting, complicated networks, and trying to elucidate what they are doing through behavioural studies is even more challenging. Animal nervous systems are largely left-right bilaterally symmetric, yet they are often functionally lateralised. This is well shown in the human brain where specific functions, such as language, are assigned specifically to only one of the two bilaterally symmetric hemispheres. Congenital defects that disrupt underlying asymmetry have been associated with a wide variety of human neurological disorders, yet the development of left-right asymmetry in the nervous system is poorly understood. The main aim of my project was to see if specific neuroanatomical asymmetry observed in the nervous system of C. elegans corresponded to a functional behavioural asymmetry.

And to do this I had to pick worms, lots and lots of worms. In fact, the first time I tried to pick enough to do a complete assay it took me over 8 hours, and I had barely collected half of them. I then had to beg one of the labs PhD students to help me pick the rest, and I watched in horror as he finished the other half in about 15 minutes. The secret, I learned, was to not pick them up one at a time, but to pick up about 15 or 20 before transferring them to the other agar plate. Fortunately, I can now collect them all in an hour, not that it wasn’t character building doing it the hard way, but I can get an awful lot more done now.

C. elegans are naturally attracted to several tastes and odorants, however they can learn to associate them with aversive stimuli and switch their behaviour to being repelled. The assay I was carrying out conditioned males to associate benzaldehyde, which they are attracted to, with different stimuli. When they are conditioned to associate the smell with starvation they are repelled, however this response in males can be trumped if they are also conditioned with mates at the same time. This is sexual conditioning, which has recently been attributed to two newly discovered male specific neurons called MCM’s (M. Sammut, 2015)

Normal males behave like this after being conditioned to associate benzaldehyde with different stimuli:

Since this was a perfect example of a pair of left-right bilaterally symmetric neurons, the interesting question was now were they indeed functionally lateralised, as was suspected from their connectivity’s. If I ablated either the left or the right MCM what would happen? Would there be an asymmetry in the circuit? Would the worms behave differently if I ablated the right MCM versus the left MCM?

As it turns out they did, but not the way we expected; from the connectivity’s it was hypothesised that the right MCM may be more important for sexual conditioning than the left. This did turn out to be the case, but what also happened was that it disrupted the worms’ ability to aversively condition to benzaldehyde, which is usually very robust. The results that were obtained are as follows:

Firstly, this shows clearly that there is an asymmetry in the function of the MCM’s; ablating the left MCM does not affect behaviour at all, which is very exciting! Secondly the worms with the right MCM ablated on the sexual conditioning plate were either very strongly attracted to benzaldehyde or repulsed in an almost 50/50 ratio, hence the bar is very small, and the error is huge. Thirdly there are other interactions going on with the sensing of benzaldehyde, which is sensed by the AWC neurons, as right ablated worms do not appear to aversively condition.

This is the connectivity of the AWC’s with the MCM’s:

Both AWC’s sense benzaldehyde, but they are asymmetric in the sense that during development STR-2, a G-protein coupled receptor, is expressed randomly in one of them, turning it on, whilst the other stays off (P. Wes, 2001). The CEM’s could also be involved, as they are responsible for sensing pheromones given off by the hermaphrodites. There are several theories on what might be happening so far, but further experiments, such as ablating both the MCM’s, will be needed to really explain the source of this behavioural asymmetry.

I loved my time in this lab, and if I didn’t have a degree to finish I’d probably still be there trying to figure out this very interesting behaviour!

Lin, A. B., 2015. Establishing a Behavioural Paradigm for Sexual Conditioning to the Odorant Benzaldehyde – a role for the MCM neurons?, London: UCL.