Chicken, quail, zebra finch, emu, duck, crow……a simple glimpse and we immediately realize how the Aves have, as a model system left their traces in various fields of biological research. And within the Aves class, the domestic fowl Gallus gallus is no doubt revered highly among the developmental biologists for their certainly distinguished career. Discovery of the germ layers, the src oncogene and B cells are only but a few examples (from a very extensive list indeed) of their notable contributions to scientific history.

How did chicks become so popular among members of our community? This preference appears to be rooted far back to antiquity, where even the ancient Egyptians showed an interest in “this bird that gives birth everyday”. Convenience in rearing and accessibility are decisive factors but for us developmental biologists, ease during embryo manipulation is a definite must. Our group released two methodological papers, both of which revisit the culturing and analyzing aspects of conventional embryo manipulation, all in hopes of making this tool more accessible to the avian community. So what`s new, then?

The paper, “Extending the limits of avian embryo culture with the modified Cornish pasty and whole-embryo transplantation methods” focuses on circumventing survivability restrictions of former ex ovo cultures with two technical alternatives, modified Cornish (MC) pasty culture and whole-embryo transplantation1,2,3. To our knowledge, MC champions existing culture systems in convenience, cost and best ex ovo growth. What more could we ask for? Shaped in the form of a traditional British pasty, the embryo is folded along the medial axis with minute yolk portions packaged inside and cut along the edges to form a “sealed” vesicle. Intra-vesicular injection of yolk was an addition we found that resulted in faster growth and a greater percentage of embryos reaching HH18 with normal morphology. The growth potential of MC-cultured embryos can be further extended when combined with the in ovo whole-embryo transplantation technique. The neatness here lies in their compatibility with most common applications: targeted labeling, electroporation and imaging (facilitated by their exposed ectoderm surface) in early stages and phenotypic and functional analysis once cultured to later stages. 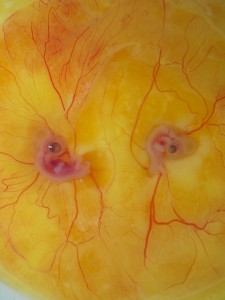 Figure 1. Parabiosed twins created by the MC method and cultured with whole-embryo transplantation.Left is quail, right is chicken.

Now, much can be done with a set of potent tools like these. Did we mention our attempts at making artificial twins? We practiced twinning by fusing two HH4 embryos first with the MC culture and later transplanting them back in ovo with the whole-embryo transplantation technique. Parabiosed twins are very rare in nature and highly valuable for hematopoietic studies (yes! there is a perfectly valid reason for making twins besides our personal pleasure).

By the way, have you ever heard of a chicken sexer? Although being one of those jobs hardly receiving limelight, it’s what gets eggs and chicken meat on household dining tables. Chicken sexers determine the sex of newly hatched baby chicks by sight alone. Male and female chickens have contrasting fates in the poultry industry; males become the majority of meat sold while females are passed on towards egg production. From a commercial and economical point of view, the faster the sexing the better. A commonly used technique originally developed in Japan in the 1930s is venting, where the cloacae of fluffy chicks are slightly opened to see inside their vent. Apparently, chicken sexers can distinguish 1,000 chicks on the hour with a 98% accuracy, which is simply incredible. So what does the remaining population lacking such ability do? Well, we hope to provide you with a solution below. 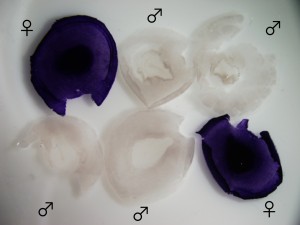 In our paper released earlier this year, “HINTW, a W-chromosome HINT gene in chick is expressed ubiquitously and is a robust female cell marker applicable in intraspecific chimera studies”, we introduce a promising alternative for the otherwise not so widely available ubiquitous-GFP chicken strains (due to country-wide quarantine regulations) for intra-specific chick/chick chimera studies 4. The essence of grafting and transplantation experiments depends on reliably distinguishing host and donor cell types. This HINTW (a W-chromosome gametolog of HINTZ) in situ hybridization probe detects female cells robustly and ubiquitously at early stages and most cells at later stages. When combined with male embryos pre-selected via a prior PCR screening step, it can be used to distinguish inter-sex donor and host tissues with outstanding precision, surpassing that of a chicken sexer.

Embryo manipulation is a toolbox full with the innovative ideas of our predecessor developmental biologists and we are very much delighted to be able to tip in. We would like to conclude by inviting anyone to our lab needing help with the manipulation techniques described in our published papers discussed above.