Let me take you on a Bioluminescent journey across many kingdoms.

If you’re not well acquainted with the term, it’s the ability of living things to chemically produce light. It’s also a natural widespread feature to many organisms, from jellyfish to algae, fireflies to fungi. In recent years, it’s become a standard molecular biological tool for visualizing gene expression. 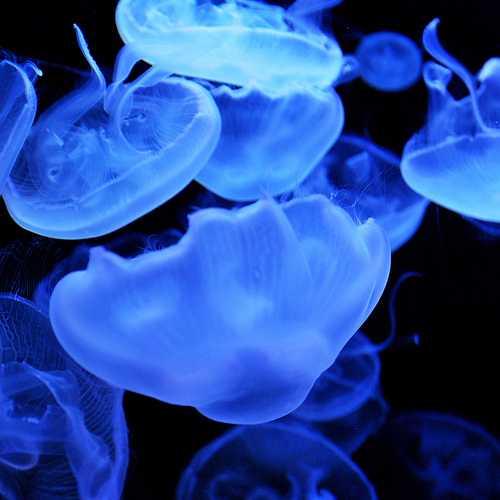 On some coasts (and even lakes), if you disturb the water you might notice the sudden appearance of hundreds of tiny bright lights in the water. Sometimes it’s observable in the crest of a powerful wave.

The light comes from the thousands of tiny unicellular algae, or dinoflagellates. The same species that cause deadly red tides (toxins released from the algae, which can cause paralysis in concentrated amounts. hence, never eat shellfish in red tide areas)

On land in fireflies, the luciferin pigments in their bodies can react with oxygen, to emit radiant light energy. This is catalyzed (or sped up) by the luciferase enzyme. Many biologists are probably familiar with Luciferase reporter genes, as markers for gene expression. 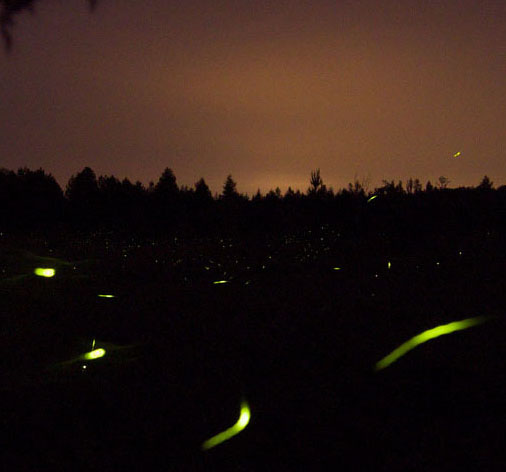 For instance, this reporter system can be used to track circadian rhythms in plants, by fusing the firefly luciferase gene to a plant one. The light signals are controlled by the plant genes, and are switched on by the plant itself during different parts of the day.

The artificial lights cue researchers when the plant genes are switched on an off according to it’s circadian clock. Of course, the plants need a water with luciferin pigments, which they don’t naturally produce. 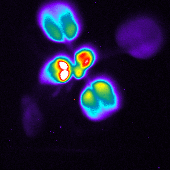 The idea of using bioluminescent genes & proteins (at least in plants) originated in tobacco in the late 80s. The moment was captured in Science & Time Magazine, it was so groundbreaking and breathtaking. Link here (Google Books) for the comparison of tobacco before and after “switching on” the luciferase action.

(CC from the Harmer Lab. Luciferase activity in a transgenic Arabidopsis plant)

Firefly luciferase is slightly different from GFP, a photoprotein. Photoproteins don’t require any special pigments, enzymes or chemicals to set it off. Once expressed, it simply needs mineral substrates to emit fluorescence. GFP was originally recruited from jellyfish. It has the same purpose as the luciferase enzyme in molecular biology, to mark the expression of select genes. At least in the lab, it GFP also requires you to shine blue light (or sometimes UV) for it to emit the green fluorescence. It’s such a standard tool now, in mice, plants, flies, fish studies. And it garnered it’s inventors the Nobel Prize for Chemistry in 2008.

In RNAi industry, it’s becoming a convenient diagnostic tool for tracking the efficiency of RNAi drugs. Previously, to gauge how well a target gene could be silenced by RNAi, substantial amounts of tissues needed to be extracted and ground up to conduct a quantitative RNA assay. this gave a numeric reading of how much was silenced compared to untreated tissues or model animals. However, this was a rather intensive method. Reporter genes, such a luciferase one, offer a non-invasive way of perceiving how strong the silencing is occurring.

Some fungi also naturally have a green glow at night. Their traditional names include jack-o-latern fungi, ghost fungi and foxfire (image on left, CC from the Cornell Mushroom Blog). Perhaps these guys were the original fairy rings 18th century cottagers thought they saw.

Thanks for reading & hope you enjoyed the show

New Developments with Luciferase in the Pink Tentacle Blog

Review on Fluorescence in Molecular Biology:


Just noticed that Wiki has a list of proposed uses of bioluminescence here (just have to scroll down a bit). Some original ones include using luciferase trees to line highways and save on electricity. Crops that light up when they’re thirsty. Glow in the dark pets. etc.