The use of chimaeras to study developmental mechanisms: from lineage tracing to disease models

Under the sponsorship of the Anne McLaren Memorial Trust Fund and The Company of Biologists, the BSDB Autumn meeting organised by Jenny Nichols and Tristan Rodriguez took place in the Pollock Halls at the University of Edinburgh. The topic this year was: ‘Chimaeras and their use in studying developmental processes and disease models’. Chimaeras are made of cells from two or more different organisms of the same or different species. Since their first conception, chimaeras have been an essential tool to dissect cellular potential and are used to address a large number of questions in developmental biology using a variety of different model organisms, from plants to vertebrates.
Read here the meeting report by Carla Mulas and Juan Miguel Sanchez Nieto.

The meeting kicked off with plenary talks by Professors Nicole le Douarin and Sir Richard Gardner, both responsible for key innovations using avian and mouse chimaeric embryos respectively. Their ideas and work led to remarkable discoveries that have been essential not only for our current knowledge in the area of developmental biology, but also to shed light on key biological concepts such cell fate and plasticity.  Nicole le Douarin presented her earlier work on the use of chick-quail chimaeras and the realisation that their different nuclear organisation could be used as a marker to distinguish host versus graft cells. She took the audience through the application of chimaeras to study the neural crest, revealing the large contribution of these cells to the development of anterior structures in vertebrates. This work remains relevant to the present day when mouse-human chimaeras have been used to trace neural crest in mammalian embryos (Cohen et al. 2016). Richard Gardner’s development of tools to enable injection of single cells into mouse blastocysts, and the successful development of the embryos thereafter, was essential to decipher clonal behaviour of cells during early mouse development – with important observations spanning the fields of embryology, epigenetics and embryonic stem cell biology.

Through the following two days, five sessions saw a wide range of applications of chimaeras discussed in various model systems. Overall, the talks were a mixture of traditional uses of chimaeras, recent innovations within this historical context and a broad range of other ideas and approaches – incorporating both the weird and the wonderful!

The first and largest session, LINEAGE TRACING AND POTENCY, focused on the use of modern labelling and imaging techniques in order to trace the descendants of specific cells, which were either labelled in situ or challenged by transplantation. What was particularly interesting in this session was how universal the application of chimaeras is in different organisms and at different developmental stages. For example, Claire Baker presented work on cells responsible for sensing hypoxia in vertebrates, trying to resolve, by a combination of lineage tracing and deletion studies, whether homologous cells in different organisms share a common embryonic origin. Both Janet Rossant and Berenika Plusa used chimaeras as tools to assess the changes in cellular potential within the mouse pre-implantation embryo as it undergoes the first two cell fate decisions. Janet explained the correlation between the plasticity of cells from the inner cell mass (ICM) and Hippo signalling pathway combining classic chimaera experiments with single cell sequencing technologies to probe deeper into questions of cell fate and cell potency in the pre-implantation mouse embryo. Berenika discussed the different roles of Sox2 and Klf4 in regulating the fate choice that ICM cells make between epiblast and primitive endoderm. Staying with the early mouse embryo, Josh Brickman argued the importance of specific nutrients in the media to support the maintenance of the naïve pluripotent and endodermal states as well as increasing the efficiency of chimaera formation. After this talk came another highlight of the meeting, Virginia Papaioannou’s tour de force on her analysis of T-box genes and their importance as an example of harnessing knowledge from the study of development to understand the human condition.

From here we moved back to avian models, where Mike Clinton, used mixed-sex chimaeras in chickens to study how the host influences the grafted tissue. He investigated how sex identity is specified, showing that somatic cells possess an identity which is cell autonomous. To round off the session, two speakers illustrated the enormous power of chimaeras and lineage labelling to uncover the boundaries for cell fate determination and cell plasticity, John West in the adult mouse cornea and Filip Wymeersch for the neuromesodermal progenitors.

In the SIGNALLING MECHANISMS session that followed, the speakers covered the influence and relevance of signalling pathways regulating cell fate choice. Claudio Stern’s hunt for a new universal organiser’s signature opened probably the most diverse session of the conference. Alexander Bruce presented his work, in which he identified p38 as a regulator of primitive endoderm differentiation in the early mouse embryo (Thamodaran and Bruce, 2016). Chris Thompson, conversely, used Dictyostelium as a model system to interrogate how genetically uniform systems can break symmetry and undergo differentiation. In this session there was also exciting insight provided by plant chimaeras. Nicola Harrison discussed the implications of the technique of grafting in apple trees and how our understanding of this process may affect the quality of the product and the yield of the crops. Kim Dale, the last speaker of this session, presented her work on how Notch amplifies Shh signalling pathway in the neural tube regulating the cell fate of neuro-ectodermal progenitors (Stasiulewicz et al. 2015).

On day two, the REGENERATIVE MEDICINE AND HUMAN DEVELOPMENT session was started with a talk by Iwo Kucinski. Iwo was awarded the first Dennis Summerbell Lecture Prize, and he presented his work deciphering signalling pathways favouring the elimination of unfit cells in the process of cell competition. Interestingly Iwo showed that unfit cells, identified by a variety of means, show a number of common signalling changes that are not detrimental for viability when surrounded by other unfit cells, but that trigger their elimination when in a competitive environment with fitter cells.  Nicholas Tan presented a novel strategy (DNA Adenine-Methyltransferase Identification sequencing) to identify genome-wide transcription factor binding targets within single embryos or with samples that have only 1000 cells and Man Zhang discussed the importance of ESSRb for Nanog function. Unfortunately, Hiro Nakauchi could not attend the meeting but Hideki Masaki flew in from Japan to present his own work in collaboration with the Nakauchi lab. Very interestingly, they observed that primed pluripotent stem cells with acquired resistance to apoptosis can contribute to chimaeras when injected into blastocysts, a process that does not occur when attempted with wild-type primed pluripotent cells. These experiments suggest that not only the pluripotency status of the cells is important for efficient chimaera formation but also their apoptotic threshold, thus providing an avenue for efficient chimaera generation with cells with restricted developmental potential.

Throughout the last two sessions, DISEASE MODELS and GENE FUNCTION several speakers discussed the advances in modern techniques and their applications to developmental biology and potential regenerative therapies. For instance, Stephen Pollard and Bill Skarnes outlined CRISPR-based approaches to generate genetically modified adult and embryonic stem cells while Ben Steventon and Kenzo Ivanovich demonstrated beautiful applications of live imaging to study the development of neuro-mesodermal progenitors during axis elongation and the early stages of mouse heart development, respectively. Vasso Episkopou presented her work analysing how Arkadia modulates the levels of TGFb signalling during early mouse development and Elena Lopez-Jimenez discussed how Oct4 is not only a pluripotency factor, but can provide positional information by regulating the Hox cluster. To complement these approaches, Megan Davey gave a fascinating insight into how chick chimaeras can tell us not only about the signalling inputs that pattern the vertebrate limb, but also shed light into the evolutionary origins of our five digit structure.  The grandiose finale of the meeting was Liz Robertson, who discussed the importance of Blimp1 in the control of mammary gland development and homeostasis. Interestingly she showed how important Blimp1 is for the organization of this epithelial tissue, providing new insight into the regulation of mammary gland tissue integrity (Ahmed et al. 2016).

Throughout the meeting there were many fond tributes to Anne McLaren, who, amongst her many other accomplishments, previously organised a chimaera-themed meeting in the early 90s. A great scientific atmosphere was created during all the poster sessions that ran throughout the breaks and during the evenings, where everybody had the chance to present their work, learn, discuss and network. Reflecting the beauty of developing systems, chimaera and embryo-inspired artwork was on display and available for purchase, designed by Mia Buehr [LINK] and Aurora Lombardo [LINK]. 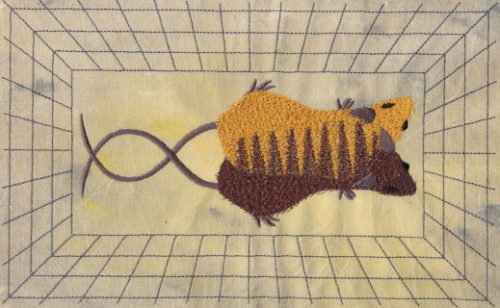 Overall, it was a brilliant and diverse meeting that took the audience literally through time, from the earlier discoveries and innovations presented by the keynote speakers, towards the current state, where modern techniques are allowing a new generation of developmental biologists to explore deeper into development and disease by using chimaeras.

We would like to thank the meeting organizers and sponsors, especially the Anne McLaren Memorial Trust Fund and the Company of Biologists. We apologize to all the speakers and references that are not mentioned directly owing to space limitations.