Getting MAD in meiosis

In meiosis I, homologous chromosomes must pair and form crossovers to ensure appropriate chromosome alignment and segregation. During this process, as in mitosis, the spindle assembly checkpoint (SAC) functions to detect misaligned chromosomes at metaphase. This delays anaphase to enable error correction and induces apoptosis when errors cannot be corrected. 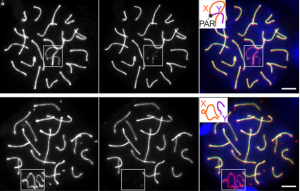 Surprisingly, previous studies have suggested that the core SAC component MAD2 might be dispensable during spermatogenesis in mice, but Imrul Faisal and Liisa Kauppi now re-investigate the role of MAD2 in male meiosis (p. 1988). Using mouse models in which either all chromosomes (Mlh1 mutants) or just the sex chromosomes (Spo11β-only mice) show defective crossover formation, the authors look at the consequences of Mad2 heterozygosity on spermatocyte apoptosis and aneuploidy. While Mad2 heterozygosity does not rescue sterility of Mlh1 mutants, suggesting that the checkpoint is still active in this context, it does partially rescue apoptosis in the Spo11β-only mouse, resulting in low-level sperm aneuploidy. These data provide the first evidence that MAD2 is important for efficient SAC activation in spermatocytes, and suggest that cells with relatively mild chromosome crossover defects are more sensitive to MAD2 levels than those with severe defects.

Growing a labyrinth with G9a

Defects in placental growth and patterning can have severe consequences for foetal health, and can cause intrauterine growth restriction (IUGR). However, relatively little is understood about the mechanisms regulating placental development, particularly the later phase of maturation when the blood vessels of the so-called labyrinth elongate and elaborate. 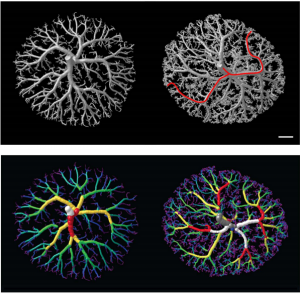 On p. 1976, Paul Delgado-Olguin and colleagues show that the histone methyltransferase G9a is required for placental maturation. Endothelial-specific knockout of G9a in mice has no effect on early placental development, but mutants show severe defects in labyrinth size and structure after mid-gestation, owing to reduced proliferation of endothelial cells. Intriguingly, the authors provide evidence for non-autonomous regulation of trophoblast cell proliferation, which is upregulated in the endothelial-specific knockout. G9a conditional mutants show reduced expression of Notch pathway effectors (previously implicated in regulation of placental maturation), and the placental vessel phenotype can be rescued by activation of the Notch pathway. Thus, G9a is a key regulator of placental maturation in mice, regulating the balance of endothelial versus trophoblast proliferation. Notably, this mechanism may also apply in human, since G9a and Notch pathway components show altered expression in samples from IUGR pregnancies.

Wheat domestication: Q is the answer

Domestication of wheat has involved a number of phenotypic changes from wild isolates. Notably, domesticated varieties possess a subcompact spike and a loss of the tough glumes that protect the grain, leading to a free-threshing phenotype. 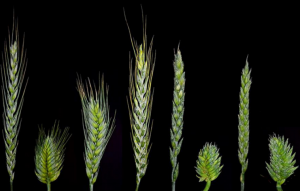 Several genetic determinants of these characteristics have been identified, including the Q gene, which encodes an AP2-like transcription factor. Cultivated wheats generally have the hypermorphic Q allele, whereas wild varieties have the q variant, associated with lower AP2 activity. It is known that AP2 factors can be regulated by the miR172 miRNA, and that Q bears a mutation in the miR172 binding site, but how this putative regulation affects the phenotypes associated with domestication has been unclear.

Two papers in this issue of Development address the regulation of Q by miR172. Steve Swain and colleagues (p. 1959) isolate a new allele of Q, Q’, which results in higher protein abundance due to impaired miR172-mediated targeting. Through analysis of Q’ and induced revertants, the authors show that higher levels of AP2 activity are associated with the formation of ectopic florets in place of glumes – an apparent homeotic transformation in the spike. Similar results are also presented by Jorge Dubcovsky and co-workers (p. 1966), who further demonstrate that reduced miR172-mediated degradation of Q is largely responsible for the free-threshing and other phenotypes associated with domesticated varieties. The relative levels of miR172 and Q define spikelet morphology, with higher Q or lower miR172 activity being associated with glume-to-floret transition and free-threshing character, and lower Q activity with the opposite changes. Moreover, a gradient of miR172:Q levels along the spike is associated with a gradient of homeotic changes.

Together, these two papers convincingly demonstrate that tight regulation of Q by miR172 is important for the acquisition of free-threshing character in domesticated wheat varieties, and help to resolve prior controversies as to the mechanism underlying the Q phenotype. These studies also add to our understanding of how AP2 factors regulate floral patterning in plants.

An interview with Hiroshi Hamada

Hiroshi Hamada, director of the RIKEN Center for Developmental Biology, talks about his career in Japan and North America, his fascination with left-right axis determination and his love of Irish music.

This Spotlight article looks at the origins of the 14-day rule and its application to human stem cell and developmental biology research.