Here are the highlights form the current issue of Development: 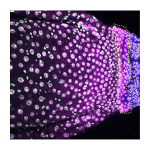 Cell identity and proliferation differs between organs, raising the question of how cells at interorgan boundaries are regulated to maintain organ integrity. On p. 4091, Don Fox and colleagues identify a specialised transition zone at the midgut/hindgut boundary in the Drosophila intestine. This ‘hybrid zone’, which shows gene expression profiles from both organs, changes in size during development but is maintained into adult life, and cells within it contribute to both midgut and hindgut tissue. The authors describe a new population of stem cells – the organ-boundary intestinal stem cells (OB-ISCs) – that reside in the midgut immediately adjacent to the hybrid zone and show slower division rates. Injury to the hybrid zone increases proliferation of these OB-ISCs, and if the injury is severe enough, hyperplastic OB-ISCs can cross the boundary and invade the hindgut. The authors find that OB-ISC proliferation is induced by release of the JAK-STAT ligand Unpaired-3 from the hindgut and the hybrid zone following injury. The hybrid zone therefore serves as a focal point of interorgan interaction to influence the behaviour of OB-ISCs and preserve the midgut/hindgut distinction, raising the possibility that interorgan regulation of stem cell behaviour may be a common mechanism to maintain organ identity.

During the development of the vertebrate central nervous system, interneuron precursors migrate extensively before they reach their final destination in the brain, where they then differentiate and become integrated into functional circuits. It is known that developing interneurons are sensitive to neurotransmitters but now, on p. 4125, Ronald Jabs and co-workers show that interneuron precursors require synaptic input for correct migration. Focussing on a population of cerebellar molecular layer interneurons in mice, the authors use time-lapse imaging and patch-clamp recordings to determine the morphological and electrophysiological characteristics of migrating interneuron precursors. Their analyses reveal that interneuron precursors exhibit spontaneous postsynaptic currents and receive both glutamatergic and GABAergic input as they migrate. Ultrastructural studies further demonstrate the presence of synaptic structures on these cells, and the authors also show that the density of synaptic elements increases along the migratory route of these interneuron precursors. Finally, the researchers report that blocking synaptic transmission, using tetanus toxin and Co2+ to abrogate presynaptic release, perturbs migration; both the speed and directionality of migration are reduced. Together, these findings reveal that the direct synaptic innervation of migrating interneuron precursors regulates their migratory behaviour and highlights an important and unprecedented role for synapses during neuronal pathfinding.

Infection with Zika virus during pregnancy can lead to severe birth defects in humans, including microcephaly. Zika has two major lineages – the Asian lineage, which has been associated with birth defects, and the African lineage, which has not – but the relative effects of each strain on brain development, and the effects of the related dengue virus that co-circulates with Zika, have not been addressed. On p. 4114, Jian-Fu Chen and colleagues address this problem by performing intracerebral inoculation with Zika and dengue virus on embryonic mouse brains and comparing their effects on neural development. They show that both dengue and Zika viruses cause microcephaly through impaired neural progenitor proliferation and increased neuronal apoptosis, though the effect is much greater for Zika than dengue. Surprisingly, given the apparent absence of virus-related pathology in affected human populations, the African strain grows faster and causes greater progenitor and neuronal cell death, and higher postnatal mortality, than the Asian lineage. This study generates insights into the neurodevelopmental phenotypes generated by these viruses, and provides a foundation for future investigations into the molecular and genetic causes of Zika pathogenesis.

Both regeneration and repair are orchestrated by a highly coordinated interplay of different growth factors and cytokines. Among the key players are the fibroblast growth factors (FGFs), which control the migration, proliferation, differentiation and survival of different cell types. In addition, FGFs influence the expression of other factors involved in the regenerative response. In their Review, Sabine Werner and colleagues summarize current knowledge on the roles of endogenous FGFs in regeneration and repair in different organisms and in different tissues and organs.

The evolution of cortical development: the synapsid-diapsid divergence

During evolution, the cortex appeared in stem amniotes and evolved divergently in two main branches of the phylogenetic tree: the synapsids (which led to present day mammals) and the diapsids (reptiles and birds). Comparative studies in organisms that belong to those two branches have identified some common principles of cortical development and organization that are possibly inherited from stem amniotes and regulated by similar molecular mechanisms. These comparisons have also highlighted certain essential features of mammalian cortices that are absent or different in diapsids and that probably evolved after the synapsid-diapsid divergence.  In his Review, Andre Goffinet discusses this data and provides an evolutionary perspective on cortical neurogenesis, neuronal migration and cortical layer formation and folding.

Developing a sense of touch

The sensation of touch is mediated by mechanosensory neurons that are embedded in skin and relay signals from the periphery to the central nervous system. During embryogenesis, axons elongate from these neurons to make contact with the developing skin. Concurrently, the epithelium of skin transforms from a homogeneous tissue into a heterogeneous organ that is made up of distinct layers and microdomains. Throughout this process, each neuronal terminal must form connections with an appropriate skin region to serve its function. In their Review, Blair Jenkins and Ellen Lumpkin present current knowledge of the development of the sensory microdomains in mammalian skin and the mechanosensory neurons that innervate them.