Here are the highlights from the new issue of Development:

Such studies were pioneered by the late Yoshiki Sasai, and on p. 1211, his colleagues Atsushi Shiraishi and Keiko Muguruma adapt the original 3D culture conditions – which supported rostral neural fate – to derive thalamic neurons from mouse ESCs for the first time. They find that addition of insulin and FGF pathway inhibitors can specify caudal forebrain identity, and that subsequent treatment with BMP7 can promote thalamic fate. Within the neuroepithelial-sphere structure that forms in these cultures, there is significant spatial organisation: early progenitors are found by the apical cavity, while more mature cell types are located towards the outside, and the spheres display rostral-caudal regionalisation. The derived neurons can extend axons that – both in culture and in transplantation experiments in vivo – show projection patterns consistent with thalamic identity. Not only does this work allow the generation of thalamic neurons in vitro, but it also provides insights into the signalling mechanisms regulating thalamus development in vivo.

Bone regeneration in the fish fin

Zebrafish can fully regenerate their fins, a process that involves the reconstitution and patterning of multiple tissue types. New bone is regenerated via the de-differentiation, proliferation and re-differentiation of osteoblasts, which occur in a spatially organised manner to recapitulate the original fin shape and skeleton. How skeletal patterning – including outgrowth and bifurcation of new rays – is controlled in this context is incompletely understood, though is thought to involve Hedgehog signalling.

Kryn Stankunas, Scott Stewart and colleagues (p. 1165) now define distinct roles for the two Hedgehog ligands expressed in the regenerating fin: shha and ihha. shha is expressed in epidermal cells immediately adjacent to osteoblasts at the site of ray branching, and is required for branching. Intriguingly, it appears to act at short range, through direct contact with osteoblast progenitors via cellular protrusions, to promote splitting of the ray through cell movements. ihha, on the other hand, is expressed in the osteoblasts, where it promotes differentiation via a non-canonical signalling route. These data clarify the role of Hedgehog signalling in ray regeneration and shed light onto the mechanisms underlying skeletal patterning in regenerative contexts.

Turning off translation in germ cells

Stem cell quiescence has been reported in many systems, and typically involves the slowing or stalling of the cell cycle and low transcriptional activity. Primordial germ cells (PGCs) of sea urchin are known to enter a quiescent state prior to gastrulation, before re-activating later in development. 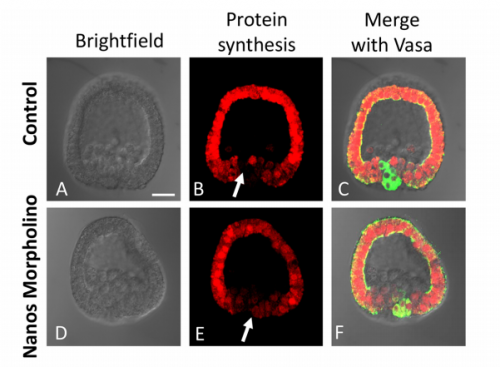 Now (p. 1201), Gary Wessel and co-workers show that this quiescence also involves a significant reduction in translational activity. Two potential mechanisms are uncovered. Firstly, Nanos2, which is expressed specifically in PGCs, binds to and downregulates the critical translation factor eIF1A. Secondly, mitochondrial number and activity is low in PGCs, which might induce a switch to glycolytic metabolism and hence an acidification of the cytoplasm. Increasing cellular pH promotes translational activity specifically in PGCs. This work raises many intriguing questions. For example, how is translational activity re-activated at later stages? How are the metabolic changes in PGCs orchestrated? How general might this be in quiescent stem cell populations? Thus, the identification of this previously unrecognised phenomenon of transient translational quiescence in sea urchin PGCs opens up many new avenues for investigation.

Timing is key to turn root into shoot

Plant cells show remarkable plasticity. For example, lateral roots can be converted into shoots by supplementing the culture medium with cytokinin, which induces shoot fate. When properly controlled, this conversion does not involve callus formation, and so allows a detailed analysis of the processes directing the switch of organ identity.

Using this system, Philippe Rech and colleagues (p. 1187) find that competence for root-to-shoot conversion is restricted to a narrow time window of lateral root development, coinciding with the stage at which the stem cell niche is formed in the new root. Furthermore, conversion can be reversed during this period – auxin treatment can switch the tissue back to a root – confirming that organ identity is not immediately fixed. Importantly, the authors provide evidence that root-to-shoot conversion does not occur via dedifferentiation, but rather via a direct transdifferentiation process. Transcriptome and methylome profiling provide insights into the gene expression and epigenetic changes occurring during conversion. This atypical mode of organogenesis may lead to novel methods for the vegetative multiplication of valuable plant cultivars.

In many systems, stem cell fate is regulated by Notch signalling. One such example is the Drosophila midgut, where intestinal stem cells (ISCs) can divide either asymmetrically, generating a Notch-positive enteroblast (EB) and a Notch-negative ISC, or symmetrically, either forming two EBs or two ISCs. But what determines the outcome of ISC division, and how does Notch signalling influence this?

Joaquín de Navascués, Jordi Garcia-Ojalvo and co-workers address this question on p. 1177 using a combination of experimental and modelling approaches. Their key insight is that contact area between the two daughter cells correlates with cell fate: where the contact area is small, both cells tend to remain ISCs, where it is larger, one or both cells differentiate. Since Delta-Notch signalling involves direct contact between the two cells, the area of contact can influence the effective signalling threshold. Both the computational and experimental analyses support the idea that the pattern of cell fates following ISC division can be at least partly explained by variability in cell contact area, and hence in the levels of Notch-Delta signalling between the two daughter cells. That such a model might also apply in other stem cell systems is an intriguing possibility.

Dan Bergstralh and colleagues discuss key features of the spindle-orientating complex and reviews how this complex is regulated and localized to allow correct mitotic spindle orientation. 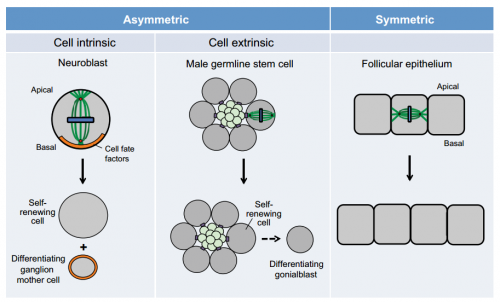 Jamie Davies explores how synthetic biology-based approaches have been used to explore the principles underlying patterning, differentiation and morphogenesis during development. 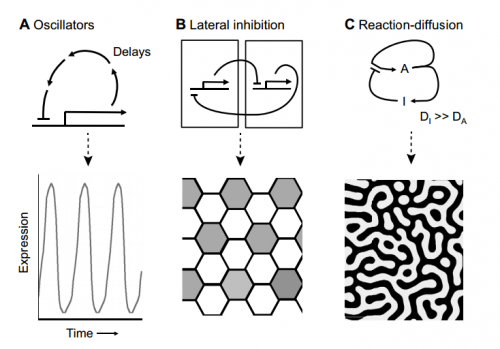