Given that most readers of this post will be developmental biologists, it seems slightly unnecessary to point out that development is an amazing, beautiful process.  But it’s true!  The expansion and rearrangement of a little ball of cells that gradually resolves into the shape of an animal is awe-inspiring when you see it for the first time, and still pretty cool when you watch it happen several times a week.  And with the imaging technologies now available, there are plenty of opportunities to capture development as it happens.

Images are vital for communicating science at every level, from illustrating a concept to other researchers, to engaging the general public.  The Wellcome Trust takes an active role in public engagement with science, and they recognise the great ability of pictures to capture an audience’s attention.  They encourage researchers to share their work in this format through a high-profile competition: the Wellcome Image Awards.  This year, two of the sixteen winning images came from developmental biology research, and both were submitted by Vincent Pasque of the University of Cambridge.

His first image shows a collection of Xenopus oocytes, which he has used extensively in his research on somatic cell nuclear reprogramming in the lab of Xenopus pioneer, John Gurdon.  The large oocytes are still within the ovary, surrounded by their support network of tiny follicle cells and blood vessels.  Hoescht staining shows the nuclei of the follicle cells as miniscule blue dots, with the pale vegetal poles of the underlying oocytes glowing in cyan.  This image is exciting because it will appear quite abstract to most people; it begs the question, “What is that?” 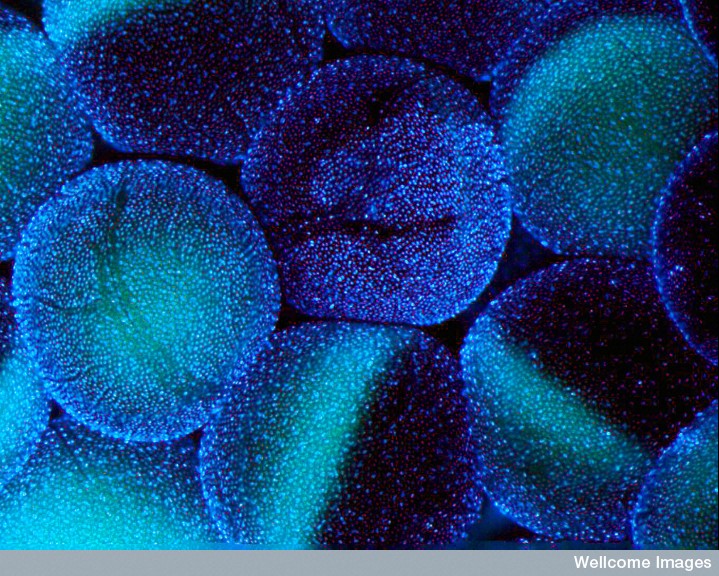 In contrast, his other image shows something that is instantly recognisable as alive.  It is a whole chick embryo, with fluorescent dye running through the complex network of blood vessels between it and its yolk.  This image was created by carefully injecting dye into the largest blood vessels at the posterior end of the vascular network.  The action of the beating heart then gradually pumped the dye around the circulatory system, and within a few minutes, the entire network of vessels was alight. 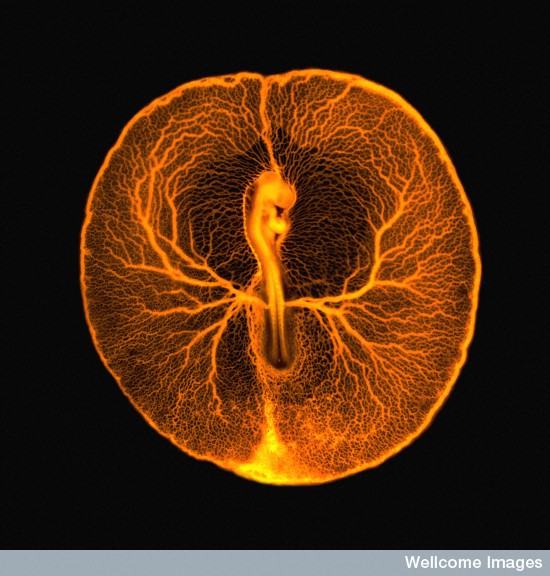 All sixteen winning images from the Wellcome Image Awards are available to view on their website and are on display at the Wellcome Collection in London until 31st December.