When Eva approached me about contributing to this series about how one goes from a PhD in developmental biology and ends up in a non traditional academic career path, I thought it would be a great opportunity. I love my job as an educational game designer at Spongelab Interactive, so why not share the winding path I took to get here?

For as long as I can remember, I’ve always loved science, particularly the way you could ask any question you wanted and then figure out how to determine the answer. When I was 10 that meant ‘do walnut shells float’ and when I was 25 that meant ‘how does an epithelial lumen form between photoreceptor cells in a Drosophila retina.’ I did my undergrad at the University of Toronto at Mississauga, hoping to get into the Forensic Science program with biology as my major. Along the way I had some amazing hands-on research opportunities that really opened my eyes to research as a career and from then on I had my sights set on a PhD, and on becoming a PI.

In between dissecting thousands of retinas during my PhD at the University of Toronto, I joined a science outreach organization called Let’s Talk Science. It was likely a catalyst for where I am now, but at the time, I was completely oblivious of its potential impact and just thoroughly enjoyed doing hands-on activities with kids. I found that I loved talking to people about science and the bonus outcome was the more I did it, the less nervous I was giving talks (something my future self would thank me for when I presented to a room of 800 scientists at ASCB). I enjoyed the challenge of taking my research and making it accessible to anyone, though 5 year olds were my favourite. Having a serious conversation with a 5 year old who made the connection ‘so if you are trying to make your blind fruit flies see again, does that mean my grandma might be able to see again too one day?’ was unforgettable. Yes it may be a bit more complicated then that, but it was pretty close to what I wrote in the ‘future applications’ section of grants.

Road Trip! Doing outreach on the road meant casting agarose gels in hotel rooms and posing with many interesting signs.

I took pride in demystifying who a scientist was and what they did. I took part in remote outreach activities where we went to small towns and did career talks, often with students who had discounted science as a career because it was ‘too hard’ or ‘too abstract’. Yet when I put up electron micrographs of wild-type and mutant retinas, it was almost always the most disengaged student who pointed out the differences. My goal was to show them that my process as a scientist was just like that – I screened different types of flies looking for differences, then designed experiments to try and figure out what was causing those differences. Some people enjoy the prestige and awe that being a ‘scientist’ evokes in people – I enjoyed breaking down those barriers and making science accessible to anyone.

It never occurred to me that there might be a way to combine my interest in communicating science with my academic background – mostly because I never looked beyond the path of becoming a PI. Fortunately (or unfortunately depending on when you asked me at the time), as I was coming to the end of what felt like the never-ending thesis, I was burnt out. So burnt out that I began to question whether I still had the drive and passion towards pursuing the academic life I had dreamed of. I had invested so much in my PhD: getting the right scholarships, giving as many talks as possible, narrowly avoiding being scooped and getting the high-impact paper, all to put me in the best position come post-doc time. And it was worth it, as I had my choice of post-doc offers, and I chose the one that would hopefully give me the best shot at landing a PI position one day. But the last year of trying to finish that ‘one last experiment’ took its toll on me and I no longer had the same motivation and ambition that I felt I needed to be successful. So I made a decision. I gave up my post-doc and started looking for other opportunities. I gave myself a year to do something different, something hopefully science related to reenergize my love of science, knowing that I could re-interview for post-docs again in year if that was what I wanted.

So how did I end up designing educational games about biology for Spongelab Interactive? I started talking to people, looking for different opportunities and along the way, I found an ad in my department. They were looking for a graduate student to help write grants and contribute to their games about biology. It sounded too perfect and strange to be true. It was the first CV I ever sent out that included my scholarships and publications as well as my video gaming experience (both quite impressive in their own right). I started out doing freelance work, primarily on a platform called Genomics Digital Lab, which went on to win awards from NSF and be published in Science 2 years in a row for best Interactive Media in their International Science & Engineering Visualization Challenge, as well as a United Nations World Summit Award for best e-content. I applied for and secured funding to turn my freelance position into a full-time position, and two years later I’m still happily using my love of communicating science, combined with game-based learning to engage students and the public in learning about science.

What I enjoy most about my job is how different every day can be. We’re a small company, so I get a chance to do everything from sales and marketing to debugging and QA. I work with programmers, animators, and illustrators, to create engaging and educational science tools. Because we have such strong science backgrounds here, we really do focus on making sure everything scientifically accurate, but also stunning and beautiful to look at. The best parts of my job are when I get into ‘creative scientist mode.’  The first project I was involved in from start to finish was a web-based scavenger hunt on the ‘History of Biology.’ It involved everything from researching the scientists, their discoveries, the state of society at the time, then building a storyline with 14 missions with science-based puzzles to solve. 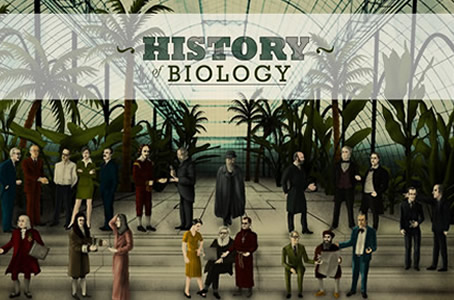 How many scientists do you recognize from the History of Biology?

In addition to creating engaging new products, I still get to do some of my favorite things from grad school. I participate in outreach both in the classroom and in other initiatives such as Microsoft’s Digigirlz (careers in technology seems just as ‘hard’ to students as science is). I am still connected with academic research as we partner with researchers on the effectiveness of game-based learning, and write collaborative research grants, something I’ve really enjoyed doing.

I’m the first to admit that I never expected to end up designing games about science. This job didn’t even exist 3 years ago, so it definitely wasn’t something I could have planned for. And yes, it was a shock to my colleagues when I announced I wasn’t pursuing a post-doc (at least for the time being), and was going off to create biology video games. They got over the shock pretty quickly, particularly after introducing them to Transcription Hero – where they could upload any gene from Genbank, pick their own music, and race against the native RNA polymerase to transcribe their gene! 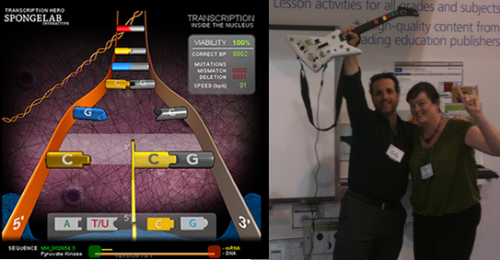 Students of all ages love Transcription Hero, and it’s a great attention grabber at conferences, but there’s nothing like going head-to-head with your labmates and their favourite genes.

Taking the chance on Spongelab Interactive really turned out to be the perfect place for my education, outreach experiences, and hobbies to intersect. A PhD in developmental and cell biology really is essential in understanding the science I’m trying to communicate and the research, analytical, and problem-solving skills from grad school are essential working in an industry where you’re leading the way with new research and technology innovations. Without my science outreach experiences where I learned to effectively communicate science to any audience, it would be hard to turn the science concepts into engaging and interactive games. And who knew, that my geeky video and computer game playing experiences would be key in understanding what makes a game fun. This is a fast-growing industry, especially as technology and education continue to converge. Companies are always looking for the right people who have a strong science background and great written communication skills – it’s a particular skill set that definitely seems to be geared towards Masters or PhD students for those that are interested in doing something a little different.

It’s been over 2 years since I made that decision to try something else for a year. I often get asked: do I have any regrets?  I don’t, none at all. I made the right decision at the time, knowing that I could always make another decision if things didn’t work out. I know that if I did have regrets, I’d be back doing a post-doc somewhere, doing some amazing science that I was passionate about.

One thought on “Educational game designer: where biology, games, and technology meet”