In October I travelled to Girona, an old Catalan city surrounded by wooded hills a hundred kilometres north of Barcelona, for the 11th meeting of the Spanish Society for Developmental Biology (SEBD). The meeting was jointly organised with the SEBD’s neighbours, the Portuguese Society for Developmental Biology, and also the Spanish Society for Cell Biology, and thus gave me a broad overview of what’s currently going on in Iberian cell and developmental biology. I had been in Girona before, but only briefly and half a life ago, and took the chance to get to know the city at a time of year when it wasn’t swamped by tourists trying to find where the Game of Thrones scenes were shot.

I also had the chance to meet some wonderful welcoming people. I don’t want to get too hung up on the financial situation in Spanish research, but it popped up again and again in conversations between talks, over beers, at breakfast. (Brexit did provide an alternate but equally downbeat conversation topic!) That there is not enough money in Spanish research is clear – public investment in research has dropped dramatically since the financial crisis began, and is well below the European average. The funding systems themselves appear to be outdated, and there is a feeling that the current government is more interested in creating a service economy than one driven by research and innovation (“more beaches and casinos than labs and fellowships,” to paraphrase one senior researcher). In this environment, new PIs are in a particularly vulnerable state, and those I talked to didn’t see the situation changing anytime soon, as recounted elsewhere.

But, against this background, there is still fantastic research being carried out in Spanish labs, and there are still Spanish researchers returning home to establish their labs after postdocs abroad (plus foreign-born researchers working in and running Spanish labs). So let’s forget about money for a moment and move on to science! 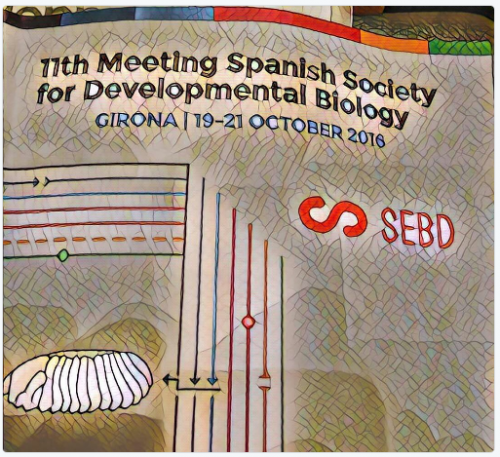 I began with a workshop organised by Xavier Trepat and María Garcia-Parajo on cell dynamics and nanobiology. The workshop aimed to highlight the new techniques that are revealing the dynamics of life at higher and higher resolution, and allowing us to measure forces and determine physical properties of tissues such as stiffness.

Jacky Goetz kicked off with a description of how multiple imaging modalities were helping his lab understand metastasis, and went through the painful-sounding process of combining intraviral imaging, micro CT and EM1 (we previously heard about CLEM approaches in an interview featuring Jacky’s collaborator Yannick Schwab). María Garcia-Parajo then took us on a tour of the plasma membrane at the nanoscale, before Jérome Solon zoomed out to the level of the tissue. Embryogenesis strikes him as origami, a single sheet folded into a complex three dimensional structure, except there is no origamist, and the properties of the material change as you progress. Defining forces is one thing, but Solon stressed that we should not forget the tissue’s response to these forces, which is heavily influenced by the cytoskeleton and the membrane. Xavier Trepat then finished with his lab’s recent work on durotaxis – the process by which cells follow gradients in substrate stiffness – and emphasised that in this system, the sensor and activator are the same thing: the cytoskeleton.

The room then discussed the future of physical approaches in biology. Would forces come to be as important to developmental and cell biologists as genetics and biochemistry had been in the last hundred years, for instance? If the answer to this question is yes (or even, as some biophysics nuts might have it, ‘much more important!’), a member of the audience raised a problem: from school onwards, scientists are trained to be biologists or physicists, without much overlap between the two. While some wanted the two disciplines to be much more integrated, others in the audience proposed that for some problems, the more important thing is to integrate the power of specialists. The ‘superdry’ mathematician who didn’t know cells were grown in liquid media until two years into a collaboration could nevertheless help wet biologists to better understand their cells with a model. The centenary of D’Arcy Thomson’s On Growth and Form next year will undoubtedly provoke further discussion as to the future of physics and biology.

The meeting proper then began, in the chamber hall of the Palau de Congressos, a modern and well-designed conference centre near the chalky green river Ter. The place had real coffee. Having been to two meetings in the States this year2, it was like manna from heaven. 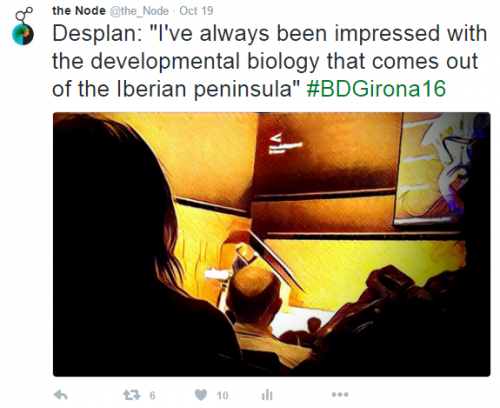 Over the meeting’s three days, the three keynote lectures tackled different aspects of how brains are built and work. Claude Desplan (who it turned out was born nearby, on the French side of the Pyrenees) described his lab’s efforts in recent years to understand how the fly makes its medulla. Recent advances in single-cell sequencing – particularly drop-seq – were helping with the effort to categorise the identity and developmental pathways of the constituent neurons. The emerging picture was of an integration of spatial and temporal patterning systems in a rather rigid and determined manner. Magdalena Götz described her recent collaboration with Mark Hübener demonstrating that embryonic neurons can integrate amazingly well into injured adult brains, anatomically and functionally. She also described her collaboration with Victor Borrell, who in his own talk in the Neural Development session described a brief window in development that generates a massive number of radial glia cells, which then form a self-sustaining lineage to drive cortical expansion. Rainer Friedrich wanted to know how the architecture of neural circuits defined how the brain worked, how form provides function. He argued that uncovering a connectome was worthwhile for this aim and not just stamp collecting, and showed some stunning reconstructions of the zebrafish olfactory bulb derived from serial block face EM. This work required outsourced ‘tracers’ to manually track axons and synapses from EM slices; it seems AI is not near the task, yet.

There was a fascinating session on oscillations across life’s kingdoms. Paloma Mas talked about how different organs in the plant maintained their own circadian rhythms and how each clock influenced the others, while Jordi Garcia-Ojalvo gave a bacteriologists view of self organisation and oscillating patterns. He wanted to convince us that bacteria are a good model for developmental questions, and described how oscillations of growth in bacterial biofilms are driven by nutrient restriction and electrical communication. I was brought back to more familiar ground with Alexander Aulehla, and live imaging of the somitogenesis clock as it ticks in mouse embryos and cultured cells. “Information,” he said, “might be encoded not just in the presence or absence of a signal, but its phase and frequency.” His was one of many talks that used mathematical descriptions to try and understand patterning – another being Luis Escudero, who described how his lab was using Voronoi diagrams (yep, had to Google this!) to explain the distribution of cell shapes within a packed epithelium, and how pathological examples provided useful deviations from the normal distributions.

Since my PhD days studying wing development, I have always associated Spanish developmental biology with fly research. I was pleased to hear from Marco Milan about the legend of the flies of Saint Narcís, who in the 13th century protected Girona from the French troops that were besieging it. Judging by the drawings and the behaviour, maybe not Drosophila, but close enough!

700 hundred years later, flies were represented in the SEBD in plenty of posters and talks. Benjamin Prud’homme gave a neat story of how a species of Drosophila evolved male-specific spots on its wings, giving us an update on previous work. The message I took home from the talk was that a seemingly simple morphological change could have quite complex genetic underpinnings: it wasn’t as simple as just recruiting a pigment-promoting gene by evolving a new enhancer. Sofia Araujo described how a mutant found in a screen for defective tracheal development led to the discovery of a role for centrosomes in the branching of single cells, independent of any affect on mitosis. The idea is that the centrosomes act as microtubule organising centres to dictate cytoskeletal organisation and membrane behaviour. Isabel Guerrero also looked at cell membranes, and the thin extensions called cytonemes that promote cell signalling. She proposed that cell-cell contacts along the length of cytonemes promoted signalling in a synapse-like manner.

I was delighted to hear the latest from Juan-Pablo Couso, whose lab was next door during my PhD and is soon to be moving from the UK to the CABD in Seville, a dedicated centre for developmental biology (something I don’t think we have here in the UK?). When I started my PhD, the Couso lab had just published their characterisation of tarsal-less, a Drosophila gene involved patterning and morphogenesis, the function of which is provided by a small open reading frame encoding a peptide only 11 amino acids long. Over the years, the lab have chased other smORFs, characterising specific functions in phagocytosis and calcium uptake, as well as taking genome wide surveys of their potential numbers. It’s a nice example of how a chance finding can radically alter the direction of a lab (the original tarsal-less allele was a spontaneous mutation). His talk ended by trying to situate smORFs into a cycle of gene birth and death over evolutionary time in the genome, which will be the subject of an upcoming review from the lab.

And these were some of my scientific highlights among a lot of fascinating work. I can only wish Spanish researchers a more stable financial future to continue it.

Girona itself turned out to be beautiful: old buildings, winding lanes, church bells. I ate well (not always a given at conferences), particularly in the final night at the conference meal in this place, got to watch Lionel Messi humiliate Pep Guardiola in a bar full of Catalans, and even take in some nightlife (scientists, it seems, dance the same the world over).

1 – I once spent a few months mapping somatic clones in the adult Drosophila wing onto templates, before prepping the wings for EM. I needed to know where the clone was, and whether it covered both surfaces of the wing or not, before mounting on the sticky EM stub. The first opportunity for disaster was a misplaced breath, launching the wings into orbit. The second was to mount the wings on the wrong side, which I would only realise after an hour setting up the EM in the cold and the dark. In retrospect, this was a breeze compared to CLEM.

2 – If you’re interested, you can read my previous reports from Boston and Southbridge. Girona was my third conference representing the Node, and I’ve become used to the strange feeling of being in a new place knowing perhaps a handful of people but being familiar with the rituals – talk followed by questions followed by talk followed by questions, the phrases that have become almost clichés (“In my lab we’re interested in…”, “A very talented postdoc in the lab…”, “I hope I can convince you that…”), the coffee and the posters and the pastries, the emptiness of hotel rooms, the excitement of a new town. It makes me think we lack a literature or culture of conferences (or at least that I haven’t found one yet – any suggestions?)