The cytoskeletal filament network within our cells underpins the functionality of virtually all cellular processes. Apart from conferring a structural framework giving cells their unique shapes, the cytoskeleton also regulates a host of dynamic activities ranging from cell division to migration, transport, and polarization. Understanding how the cytoskeleton orchestrates these events with unique spatial and temporal specificity within a developing organism remains one of the most fascinating questions in the field.

During the earliest stages of mammalian life, the cytoskeleton guides the formation of the blastocyst – a cluster of 32- to 64-cells comprising a differentiated outer cell layer known as the trophectoderm that will give rise to placental tissues, and a pluripotent inner cell mass that later forms the foetus itself (White et al., 2018). The early mouse embryo contains all three major cytoskeletal filament classes: actin, microtubules, and intermediate filaments. Interestingly, while many studies have investigated the roles of actin and microtubule filaments in regulating early embryo development, the function of the intermediate filament network during this time has remained entirely unknown. Yet unlike their more well-studied counterparts, intermediate filaments encompass a diverse range of proteins including keratin, vimentin, and desmin that are expressed in unique tissue-specific patterns, and can self-assemble into filaments in the absence of cofactors or nucleators.

We initially approached this question by consulting the literature: in 1980, the first papers were published identifying keratins as the first and only cytoplasmic intermediate filaments expressed in the early mouse embryo (Jackson et al.,1980; Paulin et al., 1980). Although there are over 50 keratin subtypes, the predominant ones in the early embryo are K8 and K18, the same subtypes that are characteristic of simple epithelia in mature tissues. A number of studies subsequently investigated keratin expression patterns during these early developmental stages, establishing their restricted localization in trophectoderm cells of the blastocyst and complete absence within the inner cell mass (Chisholm and Houliston, 1987; Duprey et al., 1985; Oshima et al., 1983). Yet their expression prior to blastocyst formation was never firmly established, owing to conflicting findings and differing methodologies. Combined with the fact that keratin knockout embryos survived preimplantation development (Baribault et al., 1993, 1994; Magin et al., 1998) and that the few early studies perturbing keratin functions reported no significant embryo phenotypes (Emerson, 1988), interest in keratin filaments during early embryo development gradually waned around the turn of the millennium.

Relooking at keratin filaments in the early mouse embryo almost three decades later offered us surprising insights. Although keratins are most well-known for their structural role in hair, skin, and nails, more recent studies have found that keratins within epithelial tissues also have diverse non-structural roles, including cell polarization, apoptosis, and cell cycle regulation (Kirfel et al., 2003; Pan et al., 2013). Armed with this knowledge and the foundation laid by earlier studies, we thus explored whether keratins in the early embryo – with their unique expression pattern in the outer epithelial layer (trophectoderm) of the blastocyst – could play specific structural or non-structural roles during embryo development like other epithelial keratins.

To investigate keratin functions, we established a combination of immunofluorescence and live-embryo imaging techniques that enabled us to explore keratin patterns with high spatial resolution and evaluate their dynamic changes during development. Apart from these technical improvements offered by newer microscopy tools, we also went beyond the early keratin studies by establishing knockdown and overexpression methods to manipulate keratin filaments within the living embryo, providing a valuable model for assessing keratin functions.

In our paper, we report some of the first functions for keratin filaments in the early mouse embryo. We find that keratin filaments act as asymmetrically inherited fate determinants that specify the first trophectoderm cells of the early embryo. Unlike actin and microtubule filaments that dramatically reorganize during cell division, keratins are stably retained within the apical region of the mitotic cell, during the first divisions that segregate cells into inner and outer positions at the 8- to 16-cell stage (Fig. 1). This apical retention of keratins biases their asymmetric inheritance by the outer forming daughter cell (Fig. 2). Apical keratin localization is further mediated by the F-actin-rich apical domain,without which keratin filaments become homogenously distributed throughout the cell, and no longer segregate unequally between the forming daughter cells. This underscores the importance of keratin-actin interactions in guiding keratin filament dynamics and functions during embryonic development. 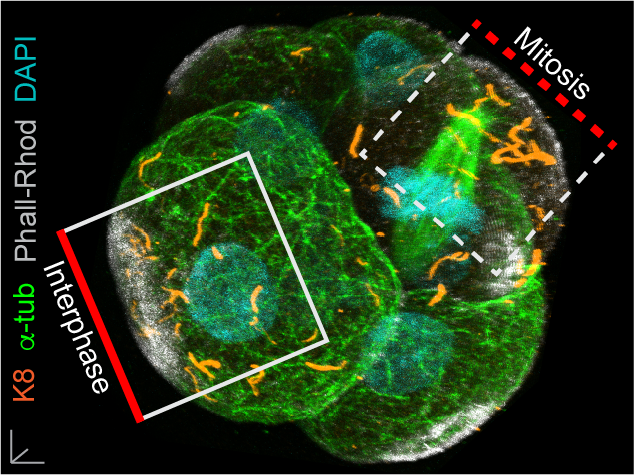 Fig. 2. Live embryo imaging reveals that keratin filaments (labelled by K18-Emerald) are asymmetrically inherited by outer daughter cells, during the cell divisions segregating inner and outer cells of the embryo.

How do keratins go on to function as fate determinants? Following their asymmetric inheritance by outer cells of the embryo, we find that keratins promote apical polarization and levels of downstream members of the Hippo pathway including Amot and nuclear Yap. This in turn drives the expression of Cdx2, one of the key transcription factors specifying trophectoderm fate in the early embryo. Conversely, outer cells that did not inherit keratin filaments or those with keratin knockdown fail to establish these trophectoderm features, instead displaying levels of Cdx2 comparable to inner cells of the embryo.

At later stages, in line with the established role of keratins in conferring structural support to epithelial tissues, the dense keratin network in the trophectoderm is also important for supporting blastocyst morphogenesis. Keratin knockdown reveals that without this filamentous network, embryos display defective apical and junctional morphologies suggestive of weakened tension, as well as reduced cellular stiffness. Thus, keratins in the embryo regulate both morphogenesis and fate specification to promote blastocyst formation and the specification of the first cell lineages in development.

Finally, our study also led us to uncover a surprising pattern of keratin expression during preimplantation development: Keratins assemble a dense filament network extending throughout all cells of the blastocyst trophectoderm, but instead display a salt-and-pepper pattern during earlier stages (Fig. 3). In both the mouse and human embryo, the first filaments form in a subset of cells of the 8- to 16-cell embryo, and the proportion of keratin-assembling cells increases over time. Importantly, the heterogenous keratin expression stands in stark contrast to actin filaments and microtubules, which both do not differ significantly in expression from cell to cell. This initial heterogenous expression of keratins at the 8-cell stage can be further attributed to cell-cell differences in the levels of the BAF chromatin remodelling complex within the 4-cell embryo, with manipulations of BAF levels sufficient to trigger changes in keratin expression patterns.

Fig. 3. Keratin filaments are heterogeneously expressed in the early embryo, beginning first in a subset of cells of the 8- to 16-cell mouse and human embryo. By the blastocyst stage, all trophectoderm cells are covered with a dense keratin filament network, but inner cells remain devoid of filaments.

Together, these findings connect cellular heterogeneities within the early embryo to fate specification pathways at later stages via the regulation of keratin expression. Although keratins have long been utilized as markers of the trophectoderm, our work further identifies keratins as regulators of trophectoderm fate, elucidating one of the first functions for these filaments during early development. With keratins once again placed in the spotlight and more experimental tools at our disposal, our understanding of keratins in the early mammalian embryo is set to expand in the years to come.