The other beauty of Fluorescent Reporter Gene Systems is its undeniable likeness to holiday colours. So then, will we eventually see Christmas trees with genes hooked up to GFP, YFP and RFP?

The purposeful beauty of the system is in our ability to view artificial fluorescence (and hence the genes they report) throughout development in living tissue. There’s no need to freeze tissues in lethal chemicals to obtain results. Furthermore, we can observe fluorescence from teeny organelles under the confocal microscope to whole plants under a UV lamp. (Fantastic, now how do you switch it off?)

Since the advent of RNAi, they’re now being used as molecular sensors for the occurrence of gene silencing in vivo. Recently, RNAi signal transport in tissues was uncovered using GFP. Researchers constructed a small RNA directed against the GFP sequences. What they found was quite surprising. If they injected their small RNAs in one leaf of a tobacco plant, which is widely expressing GFP, over time the GFP diminished first in the veins and then in tissues. Eventually, the fluorescence was quenched (summarized in Voinnet 2002). 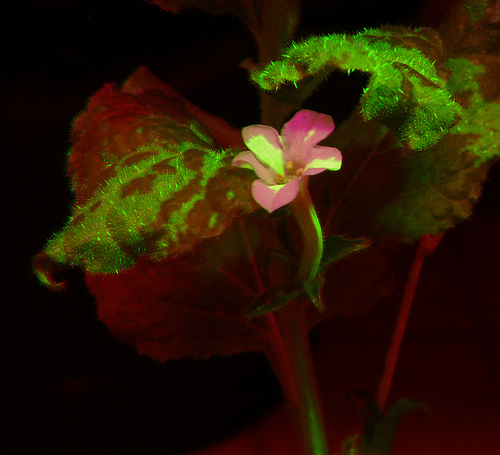 Here in Australia, Peter Waterhouse (a Grand-daddy of RNAi in plants) is working on making live action movies of RNAi in progress. One new aim in his lab is to produce the “Zebrafish” of plants…a chlorophyll-less Arabidopsis plants. Weird or genius?

(Image: Tobacco plant afflicted with a virus can cause an unusual green glow similar to GFP. The red is autofluorescence from chlorophyll. Viral transport can overlap with the transport of RNAi signals, which also serves as a plant defense mechanism against viruses & other foreign nucleic acids. Flikr CC, by Xmort)

While beautiful, it’s a not perfect system in plants for a variety of reasons. The main one is autofluorescence, or the bright red grinch that inadvertently contrasts with the merry green. A microscope tech described it as nothing short of a total nightmare. Plants naturally fluoresce because of the pigments they contain ~ chlorophyll. The huge heap of noise it makes can block the signal from the reporter

gene. However, it’s getting easier to get around this using a range of light filters. Some filters only allow a narrow wavelength of light to go through. Usually they’re specific to just the wavelength of the GFP/RFP/YFP signal, and this causes non-fluorescing tissue to appear black.

(Image: my own hideous encounter with autofluorescence :(, note that chlorophyll is absent in the pollen & petals).

At any rate, I won’t keep my fingers crossed for that fluorescent Christmas tree. But it could be potential electricity saver. Instead of purchasing a bunch of energy consuming twinkle lights, simply purchase a fluorescent bulb (doesn’t have to be UV) and switch it on in place of your regular house lights. And if you get tired of the fluorescence, spray or inject some RNAi on a branch.

On a side note, while looking for possible videos on reporter genes, I came across the following video on Youtube:

YFP in the Heart Stage embryo of  Arabidopsis thaliana (Gifford 2003)