Over the course of a lifetime, each hair follicle makes a series of new hairs, temporarily ceasing hair production before beginning again anew.  This has focused attention on the epithelial stem cells that periodically renew the follicle and regenerate the progenitor cells that form the hair shaft.  Between the cachet of stem cells and the fact that the hair is composed of the descendants of these epithelial cells, it is sometimes neglected that a small population of mesenchymal cells lying at the base of the follicle, the dermal papilla, plays a critical role in telling these epithelial stem and progenitor cells what to do. The DP serves as a physical niche for progenitor cells and also provides secreted signals that influence their behavior and that of their progeny. In work reported in a recent issue of Development (140, 1676-83), we asked whether damage to these niche cells, rather than the stem cells, could be the cause of hair thinning and loss.

Most of us will experience some degree of hair thinning or loss as we age. In most forms of hair loss, the follicle does not disappear. Instead, it makes shorter and thinner hairs in successive cycles of hair generation until it is converted to a miniaturized “vellus” follicle that makes the tiny unpigmented hairs that remain in most “bald” scalp.  The miniaturization process is progressive, with both the dermal papilla and the epithelial hair bulb diminishing in size over several hair cycles. A correlation between the number of cells in the dermal papilla and the size of the hair has been noted during hair thinning, but the question of cause and effect persisted. Does a declining epithelial population cause a `smaller dermal papilla, or does a smaller dermal papilla cause the diminution of the epithelial follicle and the hair shaft? We developed genetically modified mice that allowed us to reduce dermal papilla cell number in adult hair follicles and showed that this causes two of the hallmarks of human hair loss. Successive hair shafts produced by the same follicle are shorter and thinner, and the hair follicle spends longer periods in a quiescent phase before it starts making a new hair.

If we allowed a low level of stochastic DP cell depletion to continue, the mice failed to regenerate their hair coat, the equivalent of balding. However, the pathological cause of DP loss, inducible expression of a cell autonomous toxin specifically in DP cells, was under our control in this work. This allowed us to halt the ongoing cause of hair loss to ask whether diminished follicles were irreversibly damaged. We found that some follicles remained in the quiescent phase and did not generate a new hair.  However, others continued to make new hairs and actually restored themselves, increasing the number of DP cells and generating bigger hairs in ensuing cycles. The difference between these two fates was determined by the number of DP cells that remained when the toxin was switched off. A follicle with a few more cells would generate a new hair and restore itself, while a follicle with a few less DP cells no longer contributed new hairs to the pelage.

This suggests good news for those bothered by hair loss. The threshold effect of DP cell number suggests that once the cause of DP cell loss is controlled, therapeutic approaches need only achieve modest success in restoring DP cell number to restore hair cycling. After that, the intrinsic capacity of the hair follicle to restore itself should do the rest of the job. Lest you are tempted to call, let me clearly state that we haven’t found a cure for baldness. However, this work suggests that understanding the mechanisms by which communication between the epithelial and mesenchymal compartments of the follicle regulates DP cell number may be one path to that goal.

In the broader context, this work reveals that by altering the size of the niche for an epithelial progenitor population, different gene expression and morphogenetic programs are executed by the same cell populations to dramatically alter the outcome or organogenesis. By dissecting the alterations in genetic pathways that accompany this switch, we hope to gain more general insight into the mechanisms that regulate morphogenesis. 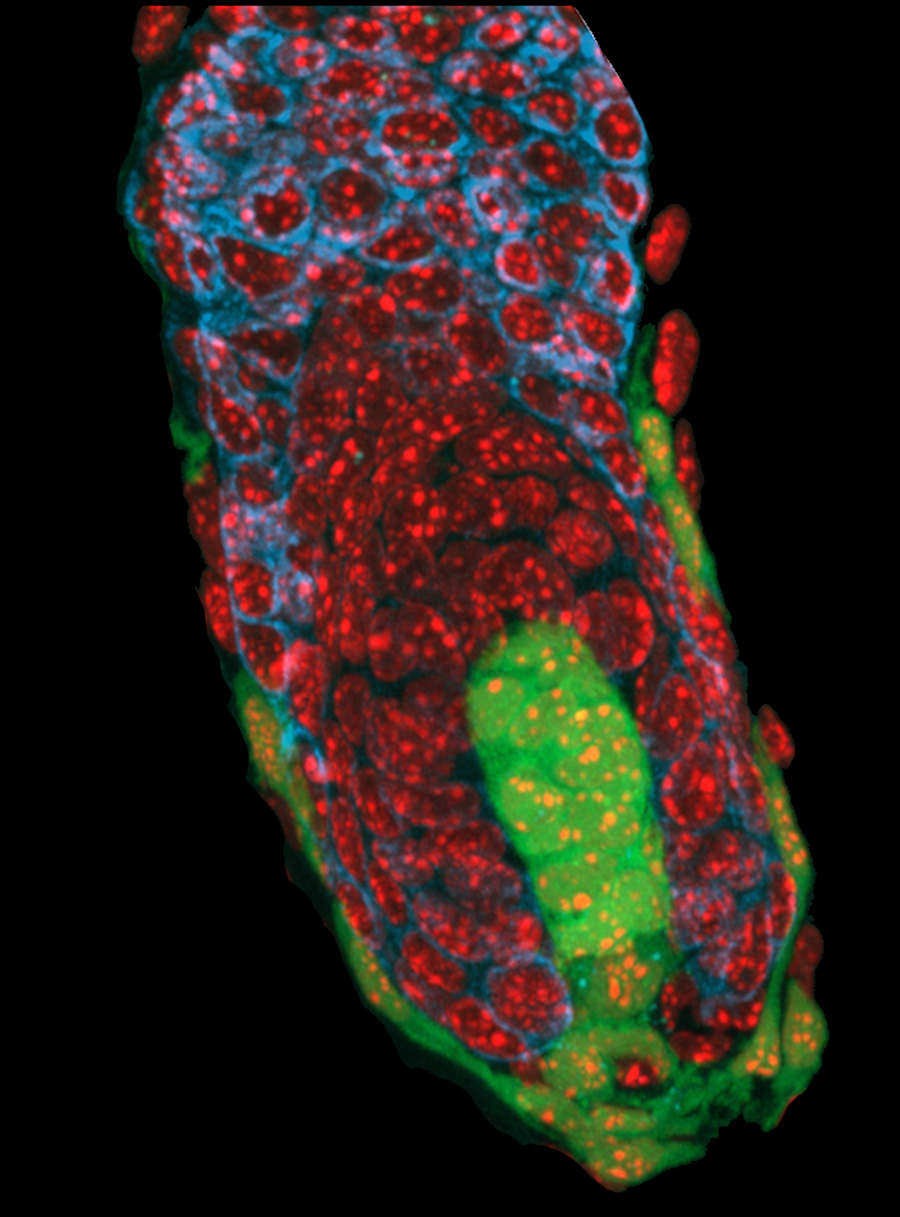 The hair follicle bulb: The dermal papilla (green cells at the center of the hair bulb) serves as both a physical and chemical niche that regulates the activity of  adjacent epithelial progenitor cells (unlabelled except for a red nuclear stain) that produce the hair shaft and its surrounding inner root sheath.