ApoE: a role in neurogenesis

Because planarians can regenerate a complete body from a tissue fragment they present a powerful system in which to study cell, tissue and organ regeneration, and to look for conserved developmental mechanisms. Peter Reddien and colleagues now describe a regulatory programme for the regeneration of the planarian Schmidtea mediterranea excretory system, the protonephridia (see p. 4387). The S. mediterranea protonephridia consists of tubules, which are dispersed throughout the animal’s body, two types of tubule-associated cells, and ciliated terminal cells, which drive filtration from the extracellular space into the tubule lumen. The researchers use RNAi screening assays and microarray analyses to show that Six1/2-2, POU2/3, hunchback, Eya, Sal1 and Osr, which encode transcriptional regulators, are involved in protonephridia regeneration. Notably, apart from hunchback, all these genes are also required for vertebrate kidney development. Moreover, the researchers show that planarian and vertebrate excretory cells express several homologous proteins involved in reabsorption and waste modification. Together, these findings suggest that metazoan excretory systems share a common evolutionary origin.

Cell divisions must be correctly oriented, usually through mitotic spindle orientation, to ensure normal development. Extrinsic signals sometimes control division orientation, but how? To address this question, Adam Werts and co-workers have been investigating the localisation of the TPR-GoLoco protein pair GPR-1/2 in C. elegans embryos (see p. 4411). In four-cell stage embryos, GPR-1/2 is enriched at the junction between two cells – the endomesodermal precursor EMS and the germline precursor P2 – and both cells align their division towards this cell-cell contact. The researchers report that, unexpectedly, GPR-1/2 distribution is asymmetric in P2 but not in EMS. Instructive intercellular signalling through MES-1/SRC-1 determines the asymmetric localisation of GPR-1/2 in P2, they report, and this distribution (which is established through GPR-1/2 destabilisation at one cell contact, and its diffusion and stabilisation at another cell contact) is important for normal development. Overall, these results identify the dynamic localisation of GPR-1/2 as a key mediator of cell division orientation in response to external signalling.

Final organ size is regulated by coordinated cell proliferation and cell expansion, which control cell number and cell size, respectively. Little is known about how organ size is determined in plants, but now, on p. 4545, Ran Xu and Yunhai Li report that MEDIATOR COMPLEX SUBUNIT 25 (MED25) regulates organ size in Arabidopsis thaliana. The researchers discover this new role for MED25 – a gene that controls shade avoidance and stress responses in Arabidopsis and is involved in transcriptional regulation – through a genetic screen for mutations that enhance the floral size of the da1-1 mutant; DA1 is a negative regulator of seed and organ size that restricts cell proliferation. Loss-of-function mutants in MED25 form large organs, they report, whereas plants overexpressing MED25 have small organs. These alterations in organ size are caused by changes in both cell number and cell size. Thus, the researchers suggest, MED25 acts within the transcriptional machinery to regulate plant organ size by restricting both cell proliferation and cell expansion.

The Wnt signaling pathway controls lineage specification and axial patterning in vertebrate embryos and, as reviewed here by Sergei Sokol, recent studies have uncovered a new mode of Wnt signaling that acts to maintain pluripotency in embryonic stem cells.
See the Review article on p. 4341 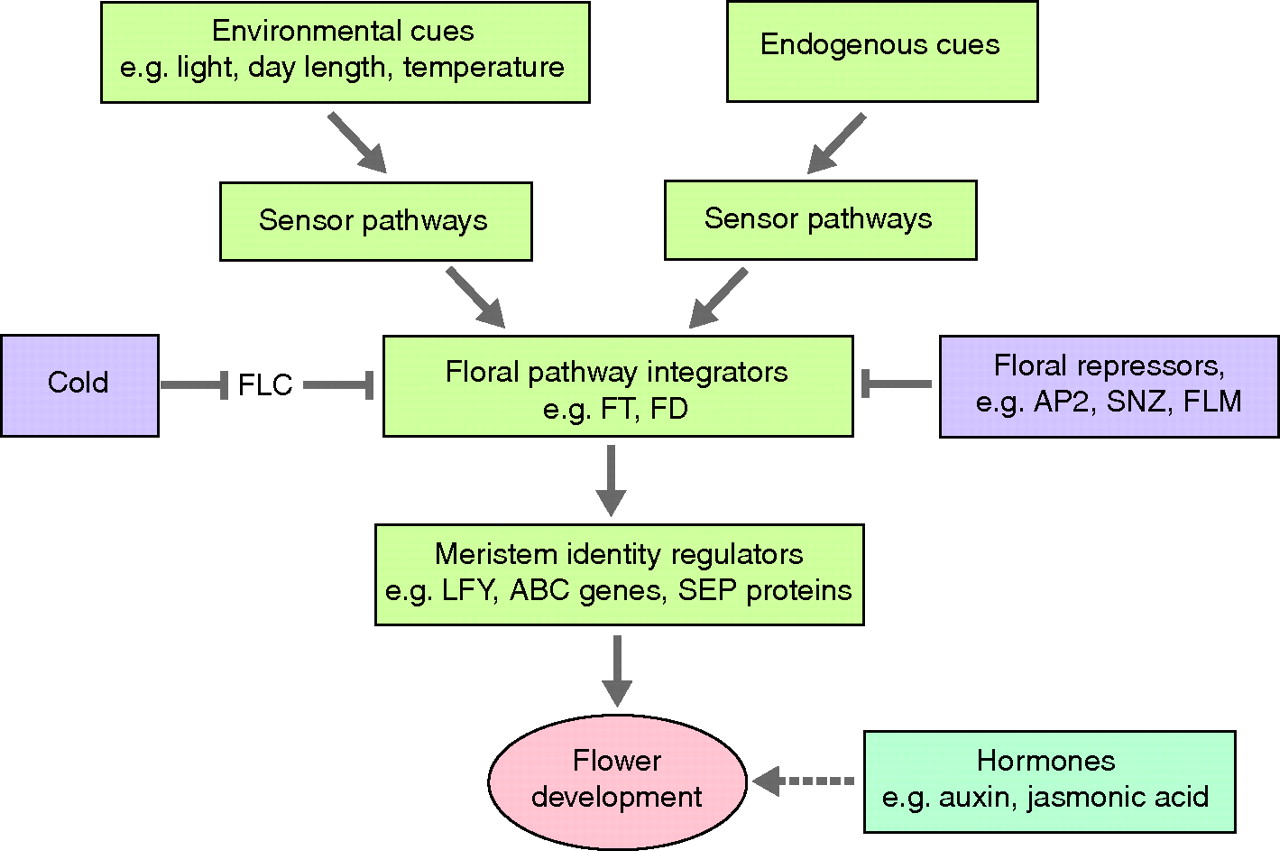 The International Workshop on Molecular Mechanisms Controlling Flower Development took place in Italy in June 2011. As reviewed by Francois Parcy and Jan Lohmann, the results presented at this workshop underlined how mechanistic studies of both model and diverse species are deepening our understanding of the cellular processes involved in flowering.
See the Meeting Review on p. 4335