Many tissues and organs are maintained by stem cell populations. Anatomical constraints, cell proliferation dynamics and cell fate specification all affect stem cell behaviour, but their relative effects are difficult to examine in vivo. E. Jane Albert Hubbard, Hillel Kugler and colleagues now use available data to build a computational model of germline development in C. elegans (see p. 47). In this model, germline cells move, divide, respond to signals, progress through mitosis and meiosis, and differentiate according to various local rules. Simulations driven by the model recapitulate C. elegans germline development and the effects of various genetic manipulations. Moreover, the model can be used to make new predictions about stem cell population dynamics. For example, it predicts that early cell cycle defects may later influence maintenance of the progenitor cell population, an unexpected prediction that the researchers validate in vivo. This general modelling approach could, therefore, prove to be a powerful tool for increasing our understanding of stem cell population dynamics.

The spinal cord contains many distinct interneuron cell types that have specialised roles in somatosensory perception and motor control. How this neuronal diversity is generated from multipotent progenitor cells is unclear. Here (p. 179), Martyn Goulding and colleagues investigate the differentiation of Renshaw cells, one of the spinal interneuron subtypes that arises from the spatially defined V1 class of interneurons. They show that the first-born postmitotic V1 interneurons are committed to the Renshaw cell fate. This fate, they report, is determined by a temporal transcriptional program that involves selective activation of the Oc1 and Oc2 transcription factors during the first wave of V1 interneuron neurogenesis, broader expression of the Foxd3 transcription factor in postmitotic V1 interneurons, and later expression of the MafB transcription factor. Importantly, Renshaw cell specification and differentiation proceeds normally in the absence of neuronal activity. Overall, these results suggest that a combination of spatial and temporal determinants might be the major mechanism for generating neuronal diversity in the spinal cord.

Polycomb group proteins control diverse developmental processes by repressing the transcription of developmental regulator genes through chromatin modification. The Drosophila Polycomb repressive complex 1 (PRC1), which contains the four core subunits Sce (Sex combs extra), Psc (Posterior sex combs), Ph (Polyhomeotic) and Pc (Polycomb), exhibits two chromatin-modifying activities – H2A monoubiquitylation and chromatin compaction. Here (p. 117), Jürg Müller and co-workers provide new insights into PRC1-mediated transcriptional repression. The researchers show that Sce is the major H2A ubiquitylase in Drosophila and identify the genes that are bound by PRC1. Then, by analysing mutants that lack individual PRC1 subunits, they identify two classes of PRC1 target genes. Repression of class I genes requires all four PRC1 core subunits whereas repression of class II genes requires only Psc and Ph. The researchers suggest, therefore, that H2A monoubiquitylation is crucial for the repression of a subset of PRC1 target genes but that chromatin compaction mediated by Psc and Ph may be the major mechanism by which PRC1 represses other target genes.

Directed cell migration occurs many times during embryogenesis. For example, in many species, primordial germ cells (PGCs) migrate after specification to the site of the future gonad. This migration involves PGC polarisation and PGC responsiveness to external guidance cues. In zebrafish, the chemokine Cxcl12a regulates directed migration, whereas the Rho GTPase Rac1 regulates polarisation. But what controls Rac activity? Fang Lin and co-workers now report that signalling mediated by the G protein subunits Gβ and Gγ (Gβγ) regulates Rac activity in zebrafish PGCs (see p. 57). The researchers show that PGCs defective for Gβγ signalling, like those with reduced Rac activity, fail to polarise and fail to migrate actively in response to directional cues. They also show that PGCs require Gβγ signalling for polarised activation of Rac and for maintenance of their overall Rac levels. These and other results suggest that, during PGC migration in zebrafish, Gβγ signalling regulates Rac activity to control the cell polarity that is needed for PGC responsiveness to chemokine signalling. 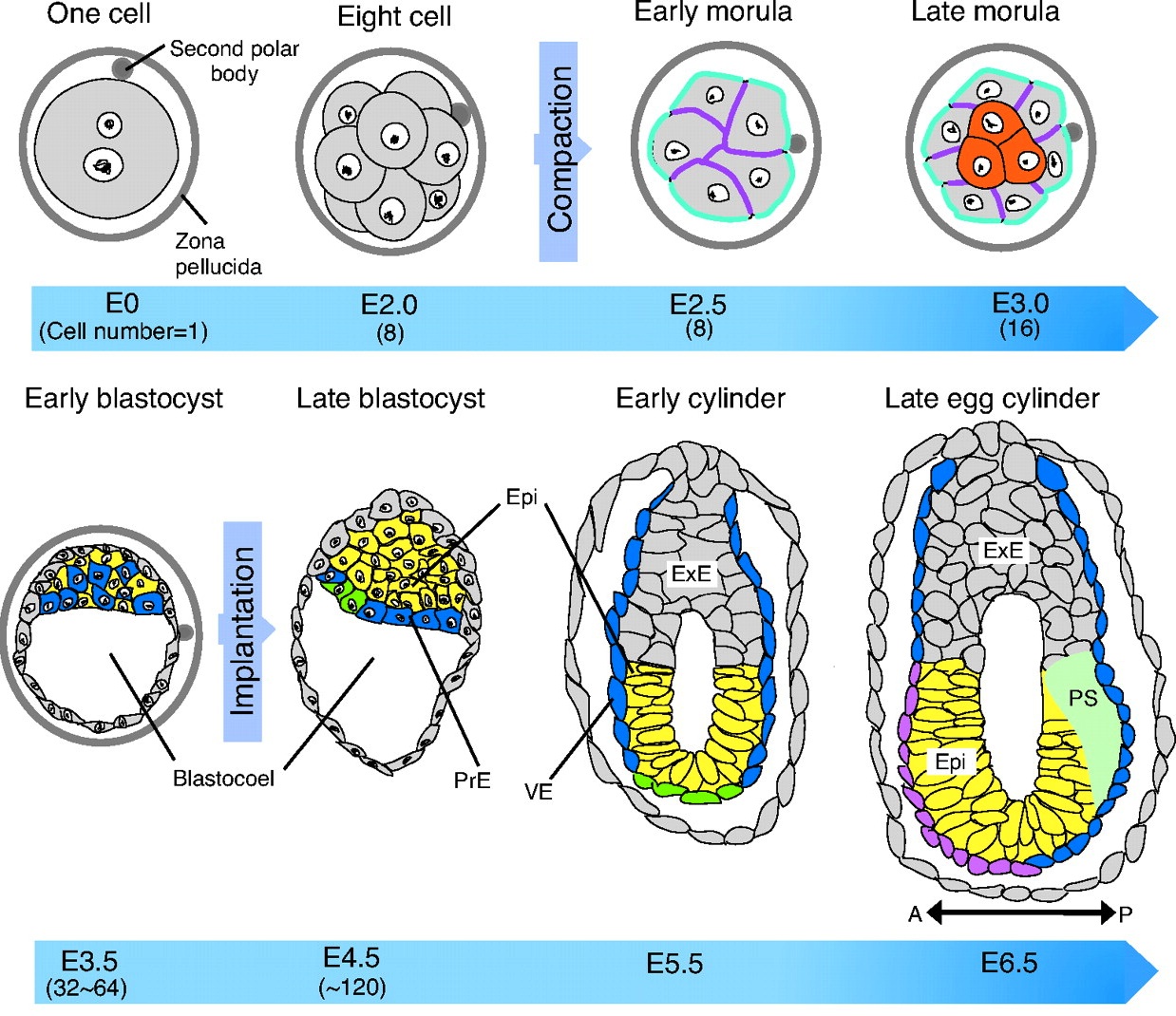 The mouse embryo generates multiple cell lineages, as well as its future body axes in the early phase of its development. Here, Takaoka and Hamada address the timing of the first cell fate decisions and of the establishment of embryonic polarity, and ask how far back one can trace their origins.

See the Review article on p. 3