The ability to reprogram human fibroblasts to neurons in vitro has opened up unprecedented opportunities in disease modelling and cellular therapeutics. Despite this breakthrough, a major challenge in the field is the limited phenotypic and functional maturation of the induced neurons (iNs). Now, on p.2216, Anna Philpott and colleagues report that cell cycle-dependent phosphorylation of key neural determinant Ascl1 affects neuronal maturation both in vivo during Xenopus development and in vitro during reprogramming of human fibroblasts to iNs. The authors show that Ascl1 can undergo phosphorylation at multiple serine-proline sites, and that this multisite phosphorylation represents a means to limit neurogenesis to appropriate levels during development. Disruption of this mechanism using a phosphomutant form of Ascl1 results in enhanced neuronal production in the early Xenopus embryo. Moreover, substitution of the phosphomutant Ascl1 for wild-type Ascl1 during lineage reprogramming not only increases the efficiency of conversion to iNs in the absence of reprogramming factor NeuroD, but also enhances the morphological and functional maturation of the cells. This exciting study suggests a way forward in addressing the roadblock of functional maturation during direct lineage reprogramming in vitro.

A-stroma-nomical role for Wnt in the ISC niche 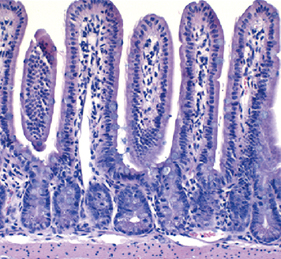 The intestinal stem cell (ISC) niche is responsible for coordinating the ongoing maintenance and regeneration of the adult gut. Wnt signalling is crucial for stem cell maintenance in the ISC niche, but the source of Wnts remains unclear. Now, on p.2206 David Virshup and colleagues show that epithelial production of Wnt is dispensable for intestinal homeostasis in the murine gut in vivo, contrary to in vitro observations. The authors use genetic ablation studies to eliminate either Porcn or Wls, two crucial components of Wnt signalling, specifically in intestinal epithelial cells. The resulting mice from these experiments are phenotypically normal, but cannot form intestinal organoids in vitro when epithelial-derived Wnt is abolished. The authors show that the latter phenotype can be rescued by co-culturing the cells with purified intestinal stromal cells that endogenously produce both Wnt and R-spondin 3, suggesting a requirement for stromal-produced Wnt in gut homeostasis. Inhibition of Wnt signalling with the pan-Wnt inhibitor C59 results in impaired proliferation and regeneration following radiation injury in mice where epithelial Wnt is already ablated, confirming the importance of stromal-derived Wnts.

Complete bone regeneration following appendage amputation is remarkably efficient in zebrafish, but does not occur in mammals. Both groups, however, can repair bone fractures to varying extents, but whether a conserved cellular mechanism underpins both bone regeneration and repair in the adult zebrafish remains unclear. It is also unclear whether new tissue can be generated in other bony structures apart from the fin. In this issue (p.2225). Gilbert Weidinger and colleagues develop two new models of zebrafish bone repair in fin and in skull, and use these to investigate the mechanism by which bone is repaired. Their findings reveal that, like complete bone regeneration, bone repair in both models involves dedifferentiation of mature osteoblasts followed by proliferation, migration to the injury site and redifferentiation to form new bone. Using live fluorescent reporter-based imaging the authors are able to observe osteoblast differentiation dynamics, and confirm via lineage tracing that mature osteoblasts do indeed contribute to the formation of new bone following injuries in both the fin and the skull. 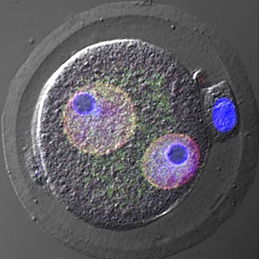 Almost every living cell contains a nucleus and, within that, a nucleolus. It is commonly accepted that the nucleolus of somatic cells arises from the nucleolar precursor body (NPB), a large, compact nucleolus present in the oocyte, but whether this is true remains to be definitively shown. Now, on p.2255 Hirohisa Kyogoku and colleagues reveal that the NPB in the zygote, which is inherited from the oocyte, is not required for embryonic and full-term development in the mouse. Instead, the nucleolus in the developing embryo is formed de novo. Using micromanipulation techniques, the authors show that removal of the NPB from the late-stage zygote did not cause any disruption to normal development: the resulting zygote was able to develop to the blastocyst stage and upon implantation gave rise to phenotypically normal pups. Several cell divisions after NPB removal, the authors observed de novo formation of nucleoli from newly synthesized materials. Taken together, these results indicate that the NPB of late-stage zygotes is dispensable for subsequent embryonic development, and that the nucleoli of developing and somatic cells form from de novo synthesized material.

Christian Larney, Timothy Bailey and Peter Koopman review the transcriptional regulation of the testis-determining gene Sry. The authors present an integrated model for Sry regulation, and explain how this model functions to control sex determination in mammals. See the Review article on p.2195

This issue’s featured video shows the non-invasive, long-term imaging of a Tribolium embryo from several angles. Read the paper by Strobl and Stelzer to find out how a combination of light-sheet fluorescence microscopy and a new mounting method allowed such imaging, on p.2331