Hippo signalling: not just for growth 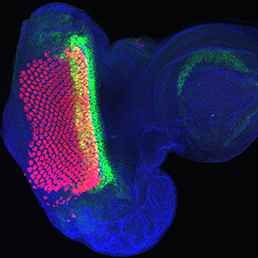 The Hippo signalling pathway regulates organ growth: activation of the pathway inhibits proliferation and promotes apoptosis. The core pathway consists of two kinases, Hippo and Warts, along with their adaptor proteins. Warts phosphorylates and thus inactivates the transcriptional co-activator Yorkie, whose target genes include regulators of cell proliferation and survival. Upstream of Warts, various factors impact on kinase activity, including cytoskeletal and polarity regulators. While Hippo signalling is best known for regulating growth, on p. 2002 Madhuri Kango-Singh, Amit Singh and colleagues define a function for Yorkie in regulating differentiation in the Drosophila eye. Manipulation of the Hippo pathway is well known to regulate eye size, but here the authors find that mis-expression of Yorkie inhibits neuronal differentiation. Mechanistically, they find that Yorkie promotes the expression of Wingless, a known inhibitor of morphogenetic furrow progression and hence differentiation. Intriguingly, the two functions of the pathway – in regulating growth and in controlling differentiation – appear to be separable: while growth is regulated by the Hippo kinase, differentiation is controlled by the upstream regulators Fat and Dachs, which bypass Hippo. These data add to an emerging picture of Hippo signalling as a regulator not only of growth, but also of other developmental processes. 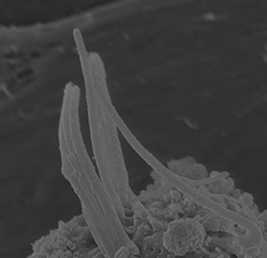 The hair cells (HCs) of the inner ear mediate both our auditory and our vestibular senses. Following loss or damage, mammalian HCs show very limited capacity to regenerate, creating a therapeutic need to generate new HCs in vitro for cell replacement strategies. Domingos Henrique and co-workers now report a relatively simple and efficient protocol for deriving HCs from mouse embryonic stem cells, by expression of key transcription factors involved in HC differentiation during development (p. 1948). Co-expression of Atoh1 (traditionally considered the ‘master regulator’ of HC differentiation) with Gfi1 and Pou4f3 can efficiently induce a HC gene expression signature in embryoid body cells. Efficiency is further increased by either Notch pathway blockade or retinoic acid treatment. The resulting cells, termed induced HCs (iHCs) also show morphological and functional signs of HC differentiation: incipient stereociliary bundles and the presence of functional mechanotransduction channels. However, the iHCs are not fully mature, implying that additional extrinsic or intrinsic factors are required to direct terminal differentiation. Although this is not the first report of in vitro differentiation of HCs, the greater simplicity and efficiency of this protocol marks a significant step towards the goal of generating HCs in culture for research and therapeutic purposes. 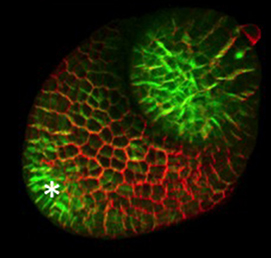 The arrangement of leaves and flowers around the stem typically follows a stereotyped phyllotactic pattern, with the location of a new leaf defined by the positions of previously specified ones. This is controlled by the plant hormone auxin. In the meristem epidermis, auxin accumulates at the site of future primordia, generating intervening regions of auxin minima where no new organ can form. Auxin-dependent phyllotactic patterns can be computationally modelled in two dimensions, considering only the epidermal layer. However, auxin flows into lower layers of the primordium, where the incipient midvein is thought to drain auxin away from the meristem. The contribution of this auxin drainage to leaf development has been hard to assess, but Didier Reinhardt and co-workers (p. 1992) have employed sophisticated live imaging and cell ablation techniques to study the role of the midvein in organ formation and positioning. The authors specifically ablate the future midvein, while leaving overlying layers intact. This leads to a transient auxin accumulation and consequent widening of the primordium. Although the damage is rapidly healed and subsequent leaf development is normal, phyllotaxis is disrupted, spacing of adjacent primordia is aberrant – revealing the importance of the incipient midvein in phyllotaxis.

More than one way to make an appendage 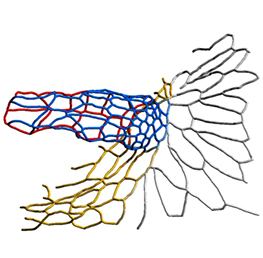 The eggs of drosophilid species are characterised by the presence of dorsal appendages, which arise from the follicular epithelium. Different species display different numbers and morphologies of appendages, but little is known about how these differences arise from a morphological perspective. Now, on p. 1971, Miriam Osterfield and colleagues compare the morphogenesis of the D. melanogaster paired appendages with appendage formation in two other species, S. pattersoni and D. funebris. In D. melanogaster, appendage morphogenesis is at least partly driven by cell-cell rearrangements between the cells that will form the floor of the appendage and neighbouring operculum cells. However, the authors find that this morphogenetic mechanism is not conserved in S. pattersoni, where eggs have variable numbers of appendages – typically five to eight. Instead, tube morphogenesis is driven by floor cell elongation: those floor cells that will form the appendage elongate dramatically without a similar exchange of neighbours. In D. funebris, both cell elongation and cell rearrangements contribute to appendage formation. That the mechanisms underlying appendage formation differ so dramatically suggests a surprising diversity in cellular behaviours during morphogenesis between even closely related species.

How to make a dopaminergic neuron

The origin of the mammalian kidney

Minoru Takasato and Melissa Little discuss recent advances in the directed differentiation of pluripotent cells into kidney tissues, and how these inform our understanding of human renal development.  See the Meeting Review on p. 1937

At new heights- endodermal lineages in development and disease

Over two decades after the publication of ‘The Atlas of Mouse Development’ by Professor Mathew Kaufman, Baldock and colleagues announce a new online resource that provides free access to the histological images and their annotations. See the Spotlight on p. 1909