Here are the highlights from the new issue of Development: 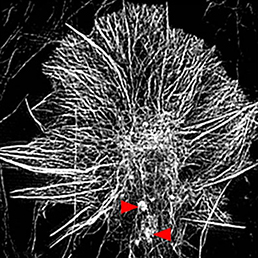 Invasive cells such as immune and metastatic cancer cells form protrusions known as invadosomes, which mediate adhesion to the underlying substrate and induce extracellular matrix degradation – thus promoting invasiveness. On p. 486, Timothy Gomez and colleagues demonstrate that invadosomes can also be found in axon growth cones, where they have not previously been characterised. Primarily using Xenopus spinal cord neurons as a model, the authors use high-resolution imaging techniques to identify and characterise these structures, both in culture and in vivo. Importantly, similar structures can be found in other Xenopus neuron populations, as well as neurons derived from human pluripotent stem cells. In functional assays, the authors find that axon growth in culture is unimpeded by disruption of the invadosome protein Tks5, but in vivo outgrowth of motoneurons into the periphery does require invadosome activity. Thus, these data not only demonstrate the presence of invadosomes in growth cones, but also provide evidence for a specific role for these structures during certain phases of axon outgrowth.

Taking the strain out of stem cell renewal 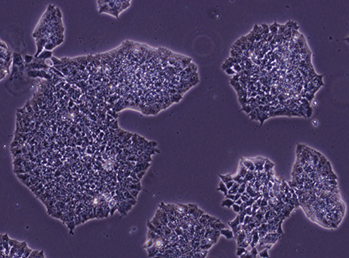 For many years it has been clear that embryonic cells from different mouse strains differ in their properties for generating embryonic stem cells (ESCs). Specifically, ESCs can be generated and maintained from some (‘permissive’) strains in the presence of serum and LIF, whereas these conditions are insufficient to support self-renewal of cells derived from other genetic backgrounds (‘non-permissive’ strains). Here (p. 431), Satoshi Ohtsuka and Hitoshi Niwa set out to understand the reasons behind the differing potential of ESCs from different origins, and find that this can be traced back to differential LIF responsiveness. They observed that LIF treatment induces higher JAK-Stat pathway activity at early time points, and lower MAPK activation at later time points, in permissive strains than non-permissive ones. This difference is functionally important, since ectopic activation of Stat3 in ESCs from non-permissive strains promotes their self-renewal. Although the downstream outputs regulated by the balance of these two pathways have yet to be fully analysed, these experiments reveal important differences in the cellular responses that underlie the differing properties of ESCs from different genetic backgrounds.

Reporting on β-catenin in the vasculature 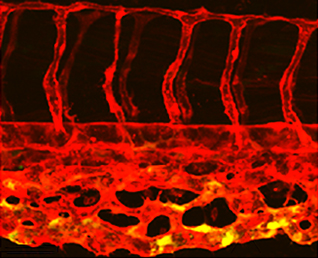 β-catenin is a multifunctional protein that acts both as a downstream mediator of the Wnt signalling pathway and as a core component of adherens junctions. It is also widely expressed during development. Consequently, dissecting out the specific functions of β-catenin in particular contexts can be challenging. Shigetomo Fukuhara, Naoki Mochizuki and colleagues now report a transgenic zebrafish line that allows the visualisation of β-catenin activity in living tissues (p. 497). They use this line to investigate the role of β-catenin in vascular development, finding that it plays a key role in formation of the caudal vein (CV). Surprisingly, β-catenin activity in this context appears to be independent of Wnt signalling, and instead is regulated by the BMP pathway. They further identify Aggf1 as a putative BMP target that cooperates with β-catenin to activate downstream gene expression in the CV. Finally, the authors show that expression of the orphan nuclear receptor Nr2f2, which is known to be involved in vein specification, is dependent on β-catenin and Aggf1, thus providing insights into the mechanisms by which BMP-dependent β-catenin activity regulates CV development. 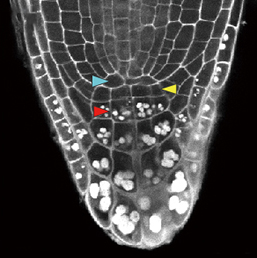 In the plant root meristem, a highly orchestrated pattern of cell divisions controls both root growth and cell fate. A large number of signalling factors and transcriptional regulators have been found to control proliferation and differentiation in the root meristem, including small peptide ligands of the CLV3/CLE family. However, the mechanisms by which these peptides act remain poorly understood. Now (see p. 444), Shinichiro Sawa and colleagues identify the E3 ubiquitin ligase PUB4 as acting downstream of CLV3/CLE signalling to regulate cell division in the Arabidopsis root. The authors identify pub4 mutants in genome-wide screens for mediators of CLV3/CLE activity, and characterise the mutant lines in detail – finding defects in a number of lineages that result in overproliferation and patterning phenotypes. Mechanistically, the authors show that the expression of a D-type cyclin is disrupted in the mutant and that auxin levels are altered. Although much remains to be learned about how PUB4 acts in this context, the data intriguingly point to a role for PUB4 in regulating the timing of asymmetric cell divisions and provide further evidence for an important function for CLV3/CLE signalling in controlling root meristem activity.

A mathematical approach to periodic patterning

Hiscock and Megason present a mathematical approach to understanding periodic patterning development. They also suggest ways in which different types of model can be tested, illustrating the potential of this methodology using specific biological examples. See the Hypothesis on p. 409

The cell fate decisions and patterning steps that occur during plant embryogenesis are essential reiterated during organogenesis. Hove, Lu and Weijers summarise our current understanding of the early stages of plant embryogenesis, with a focus on how the major lineages are specified. See the Review on p. 420

The many faces of science outreach

This Spotlight discusses diverse ways in which scientists can engage with the wider community to further the public understanding of science and encourage individuals to get involved, highlighting specific examples examined in the ongoing Node series on science outreach. See the Spotlight on p. 407