Hello Node folks.  My name is Kim Cooper, and I’m a postdoctoral fellow with Cliff Tabin at Harvard Medical School.  I recently spoke at the SDB meeting in Albuquerque, and Eva Amsen approached me about contributing to the Node.  The primary reason is because I’m working on a fun animal that takes me off to China for field collections and has sent me down a rough road of learning to breed an exotic in captivity.  The animal is a jerboa.  It’s a bipedal desert rodent related to rats and mice.  They’re native to northern Africa through the Middle East, Central Asia, and northern China. 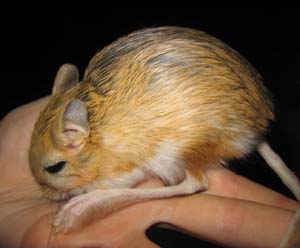 I’m interested in this adorably bizarre animal because it is an excellent model for evolutionary novelty in the limbs.  They have elongated hindlimbs with enormous feet that have only three toes and metatarsals that are fused into a single bone.  This gives them a long bounding stride upright on their hindlimbs, and they really only use their forepaws for feeding, digging, and grooming.  They are very efficient movers – they can hop three meters in a single leap and a meter straight in the air when startled.

The gist of what I’m doing with these animals involves collecting embryos from pregnant females soon after the come out of hibernation and breed more or less synchronously in northern China. The embryos are fixed and preserved in methanol and then shipped back to Boston for further developmental studies. I’m taking a two-pronged approach by candidate gene analysis and RNASeq to identify genes that are expressed differently in the three-toed hindlimb of the jerboa compared to the five-toed forelimbs and fore and hindlimbs of a near relative – the mouse.

I’m excited to share field collection stories from China and experiences with starting the colony.  The field stories are easy since I’ve been keeping a travel blog for about 5 years now and can cross post from previous years until the next field season starts again in the spring.  So stay tuned.  As a teaser I can tell you I’ve been chased by camel ticks in the desert, slept in a yurt near the border with Pakistan, and come home with typhoid.  But I’ve had some great times and met a lot of wonderful people along the way.  And collected a lot of jerboas.