Did it ever occur to you that to enjoy music from Antonio Vivaldi to Lil Wayne, we use only about 22,000 sensory hair cells in our ears? Because hair cells are mechanosensors translating sounds to neural impulses, their irreversible degeneration causes hearing loss. Unlike amphibians and birds, we as mammals cannot spontaneously regenerate hair cells to restore hearing. This is in part why hearing loss is permanent. In order to identify hair cell progenitors in the postnatal cochlea, we took a pathway-centric approach and used active Wnt signaling (Axin2) as a marker. Much to our surprise, we detected robust Wnt activity in tympanic border cells, a poorly characterized group of cells directly beneath the organ of Corti (the hearing organ). 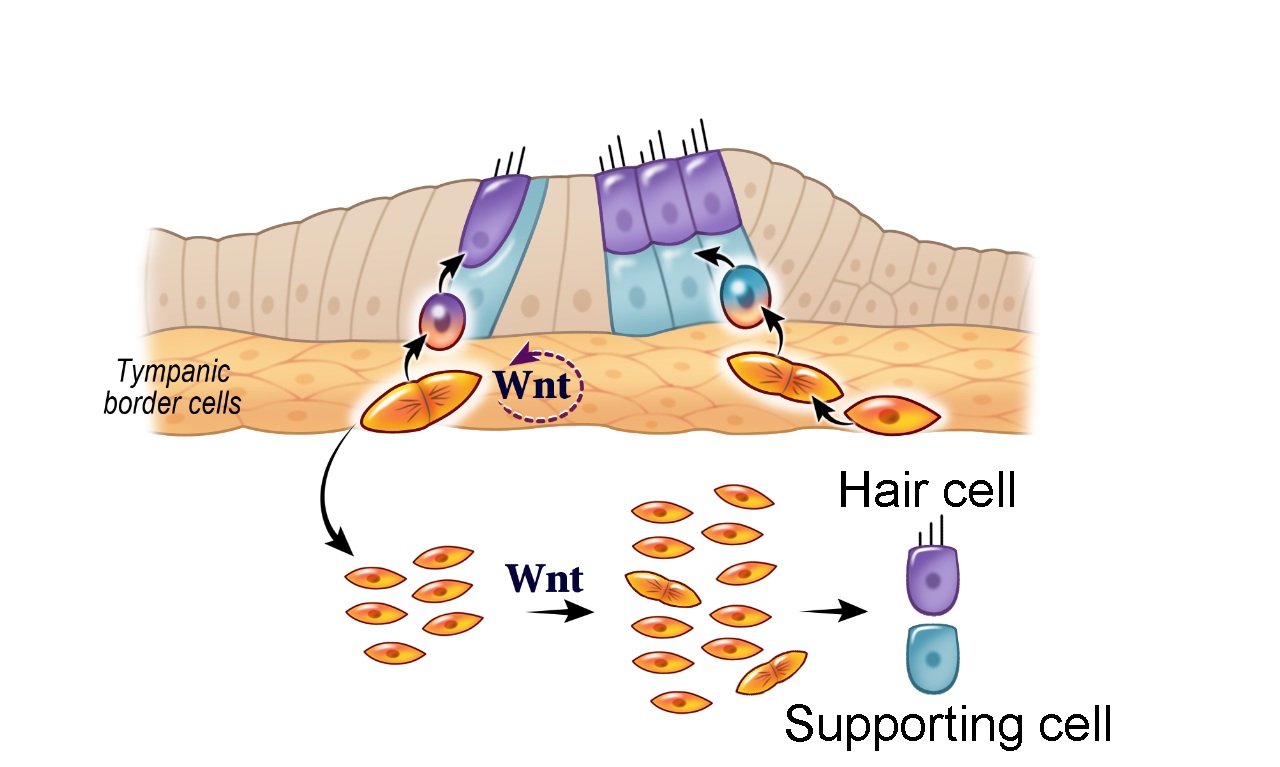 In this article, we show that Axin2, as a downstream target of the canonical Wnt pathway, marks tympanic border cells. We took advantage of the Cre-Lox recombination system to temporally label Axin2-expressing tympanic border cells in neonatal mice and follow them over the first 2 weeks of postnatal development.  Our data demonstrate that these cells, despite initially lacking epithelial markers, contribute to the sensory epithelium including sensory hair cells.  Using an analogous Axin2-LacZ reporter mouse strain, we isolated tympanic border cells using flow cytometry and found that they were similarly able to acquire epithelial and sensory phenotypes in vitro.  Although their natural ability to become sensory epithelial cells was surprising, stimulating the Wnt signaling pathway increased their ability to proliferate, similarly to observations made on progenitor cells from other organ systems. Interestingly, there is another population of Wnt-responsive cochlear progenitor cells, the recently characterized Lgr5-positive supporting cells, which are distinct from the Axin2-positive tympanic border cells. This study now suggests that the neonatal cochlea and surrounding tissues may provide niches for multiple progenitor cell populations, a model comparable to many developing and self-renewing organs. Unfortunately either the niches or the progenitor cells (or both) are not maintained into adulthood. This begs the questions of how the two progenitor cell populations relate and interact and how stemness is lost in the mature cochlea. For now, hair cell loss remains irreversible, so think twice about sitting in the front row of the next concert you attend because the noise damage you experience will contribute to the decline of your hearing with time.