The Young Embryologist Network (or YEN for short) held its fourth annual meeting this year on the 1st June. The conference began as a small afternoon gathering in a lecture room at UCL, but over the years it has now become a fully catered day-long event, this year filling a huge lecture theatre at the Institute for Child Health. Since the start, the ultimate aim of the meeting has been to promote interaction and collaborations between early career researchers working in developmental biology. The organisers themselves are also early career scientists, this year coming from UCL, the Institute of Child Health, NIMR and Kings College London.

Professor Liz Robertson was invited to present the keynote lecture this year, and she kicked off the day with a superb talk on cell fate decisions in the early embryo. She particularly focused on recent work from her laboratory relating to the many roles of Blimp1 in the development of the limbs, heart, gut and placenta. Liz stayed for the rest of the meeting to help judge the talks and posters, and was also the lucky winner of the YEM raffle!

The first session of the day covered the theme of early development. Yusuke Miyanari presented some interesting work on how the tight regulation of Nanog dose at the chromosome level is necessary for pluripotency during development. Wenchao Gu then addressed the role of Ldb2a as a novel regulator of the Nodal and MBP pathways in zebrafish embryos. Next, Daniel Grimes, presented work on the establishment of left-right symmetry in the early embryo. In a talk that stimulated lots of interesting questions, he demonstrated the requirement for Pkd1l1 in coupling the physical force of fluid flow at the node to the asymmetrical expression of downstream molecular targets. Jorge Beira closed the first session with a talk on apoptosis during tissue homeostasis. He suggested that specific cell death stimuli may activate distinct pro-apoptotic pathways, despite having the same outcome.

After the lunch break and poster session, a Q&A panel discussion was held on the theme of science publishing. Katherine Brown, the Executive Editor of Development, was joined by Katie Ridd, the Senior Editor of Nature Communications, and David Wilkinson, the Editor in Chief of Mechanisms of Development. Questions covered a wide range of topics including how a decision is made on whether a paper is sent out to reviewers, whether publishing reviewers comments is a good or bad idea, and how important impact factors really are. It was generally agreed that keeping authors anonymous for reviews doesn’t really work in practice, and that open access to journals will become more and more widespread in the future.

The second session of talks was focused on the theme of development and disease. Alex Palmer presented research using the Splotch mutant mouse to gain insights into how neural tube defects arise, and how folic acid supplementation is able to rescue these defects. Lara Brock then discussed how a cleft palate can form, and showed 3D modeling work to investigate the cellular mechanisms responsible for the directional growth of the palatal shelves. To conclude the second session, Iain Dykes spoke about the different mechanisms by which Hic2 acts in both pre- and post- transcriptional gene regulation during cardiac development.

The final session of the day was on the theme of migration and neural guidance, and Laura Ward started out by showing some amazing movies of the zebrafish neural tube to accompany her talk on tissue polarization during neural tube development. Antonio Schepis then discussed the role of alphaE-catenin in the regulation of cell-cell adhesion and membrane blebbing during epiboly. Fani Memi addressed GnRH neurons and their migration from the nasal placode to the hypothalamus. She demonstrated an important role for SDF-1 and its receptors in guiding this migration. Finally Christopher Clark gave the final talk of the meeting, presenting some elegant fate mapping work on the crucial role of alpha2 chimaerin in wiring the ocular motor system.

The day concluded with a word of thanks to the kind sponsors of the YEM 2012. We rely upon sponsorship to keep our meetings ad membership free of charge so a big thanks to The Company of Biologists, Development, NIMR, UCL Faculty of Life Sciences, UCL Department of Cell and Developmental Biology, UCL Basic Life Sciences Domain, BSDB, Eurogentec, New England Biolabs, Eppendorf and Insight for contributing to this years meeting. Special thanks also go out to the whole YEM organizing committee, but particularly to Cynthia Andoniadou and Rachel Moore who helped the day run so smoothly!

The ever-popular wine reception after the meeting provided a great chance for everyone to network and continue the days discussions, as well as learning more about the Young Embryologist Network. Thanks to everyone who participated in YEM:2012. It was a great day! Congratulations to Christopher Clark and Daniel Grimes, who were awarded first and second prizes for talks, and to Scott Curran and Chiara Ragni, who won the first and second poster prizes. 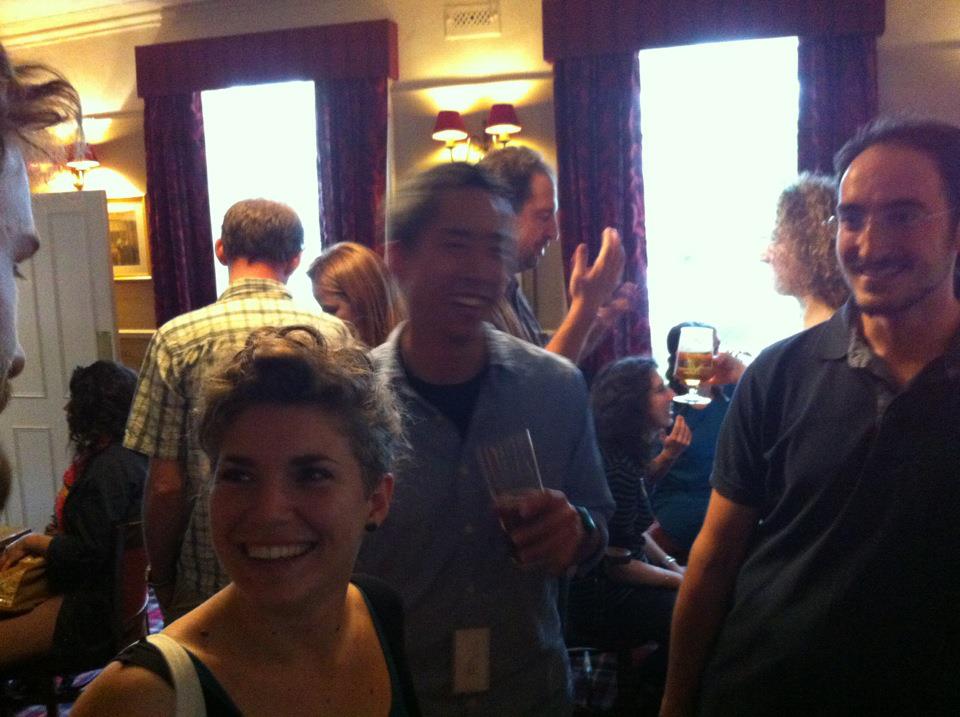 For more information about the Young Embryologist Network, please visit the website (www.youngembryologist.org) or find us on Facebook.