I’m going to collect dates from my travel journal and batch post the most interesting bits.  See this post for my introduction and an explanation for all of this. Enjoy!

The flight was outrageously long, but uneventful once I boarded. I didn’t find out until I got to Logan airport that my flight was to La Guardia but connecting out of JFK, so I had to catch a cab across Brooklyn. Then it was a bit of a game of musical chairs to get my seat. I boarded late so that I didn’t have to take part in the herd of passengers. Since my first trip to China as a tourist, I’ve observed a collective rush to board flights in no particular boarding order, so I routinely wait until everyone else has settled and board nearly last. On this flight, I was supposed to be in Seat 42A, but there was a guy in that seat. He was supposed to be in 41A, but there was someone in his seat who was supposed to be in 40A. I decided “screw it” and ended up in 40A. That apparently very much confused my graduate student companion when he came looking for me midflight and I was not the person in 42A. I was dead to the world for most of the flight anyway, so I didn’t notice much of a thing. My brain is sort of mush right now from the jetlag, and we’ve started right to work in our colleague’s lab getting things ready. I got to see the Olympic stadiums this morning. They’re super cool. And the institute of zoology is really nice. It’s a new building with new lab space. I love new lab space. We’re going to finish getting things ready today and tomorrow and maybe have a bit of time to see the Great Wall and the Imperial Palace before we head off for Inner Mongolia. No Jerboas yet, but there is a great big Tibetan rabbit sitting in the corner of the desk watching me type. It’s Dr. Yang’s pet, and it’s a little snotty and keeps sneezing. Kind of funny to see a rabbit sneeze.

All I’ve managed to do so far is eat and sleep, and I have been wonderful at that. Ms. Xia (a research associate in our collaborating lab) brought me to lab yesterday morning to get started on the preparations for the fieldwork. That didn’t take very long, so she took me to an outdoor recreation store (like REI) and then to a tourist souvenir market. I quickly decided that I needed lunch and sleep, so after trying to choke down a bacon, egg, and pickle (!) sandwich, she took me back to the hotel for a “nap”. Said “nap” turned into a 5 hour sleep. I woke up in time to catch dinner, read a bit of my book, and go back to sleep for a full night. I think I’ve shown that jetlag what’s for though. I will have to say that Shaoyuan, my graduate student, knows good food. With the exception of that questionable sandwich (for which he wasn’t present, and I should have known better since the menu was in English), all of our meals have been fantastic. I had a really beautiful pork and tofu dish last night, and brunch today was a bowl of spicy chow mein noodles with mushrooms and chicken. I may still lose a little weight on this trip, but it won’t be for lack of trying to keep myself full at all times. I’ve also learned from every country I’ve visited that it’s better to go to places with no English menus and point at other people’s plates if you have to. If you’re willing to risk eating calf intestine, you’re likely to get a fantastic meal.

Yesterday I made enough paraformaldehyde to fix a horse. That excites me in a weird way. We’re pretty much ready to go now. Traps, lots of food (for us and rodents), DEPC water, PFA, tubes and tubes and tubes… After the prep work, I caught the train downtown and walked for about 2 hours to get to the Forbidden City to meet Shaoyuan. If it’s true that the best way to learn a city is to get lost in it, then I must know Beijing pretty well by now. I had no idea how EVERYTHING on the map is very very very tiny compared to real life. And to you Texans out there – you aint got nuthin on China. Nothing is bigger in Texas compared to this place.

I was doing fine on time until I got to Tiananmen Square. The Chinese flag in the square is lowered every day at sunset and is cause for a huge spectacle. They shut down all foot traffic past the flag as a crowd of several thousand forms. I had to take the underground passages to get around everyone. But not until after I snapped a fantastic shot of a guy posing in front of the police formation. That’s one thing I love about Asia. People here will pose for a picture in front of just about anything. As a result, I’ve started a bit of a collection of my own pictures of people having their pictures taken in front of random things :) So after a bit of a walk around, Shaoyuan took me to some famous restaurant where we had the most AMAZING duck I’ve ever eaten in my life. It was so juicy, and the skin was the most perfect brown crispy deliciousness.That’s it for now. I’m going to help get things ready to leave tomorrow and then we’re going back down to see the inside of the Forbidden City and visit Chairman Mao’s preserved remains. More later… 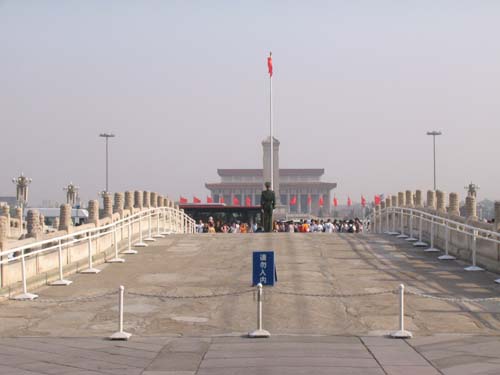 One thought on “On the first days in China…”