This article is a re-post of an article published at the F1000Research blog on the 8th of May, 2014. Eva Amsen is the outreach director of F1000Research.

Many of you will have been following the STAP stem cell saga: In January, researchers from Japan announced in Nature that they had produced induced pluripotent stem cells (iPS cells) by bathing somatic cells in acid. Other researchers were sceptical of these claims, and tried to reproduce the work. One of those scientists, Kenneth Lee of the Chinese University of Hong Kong, liveblogged his attempts on ResearchGate.

It soon became apparent that one of the underlying problems was that not a lot was known about the experiments in the original paper. Not all data was available, some data were potentially incorrect, and the protocol appeared to be insufficient to reproduce the work.

Lee pushed on, though, and using an updated protocol he systematically kept track of everything he did, and openly discussed it with others.

Today, F1000Research has published the full summary of Lee’s work, with all underlying data sets. Using white blood cells isolated from the spleen of neonatal mice – the same cells used in the original study – as well as lung fibroblasts, Lee was unable to replicate the original findings. 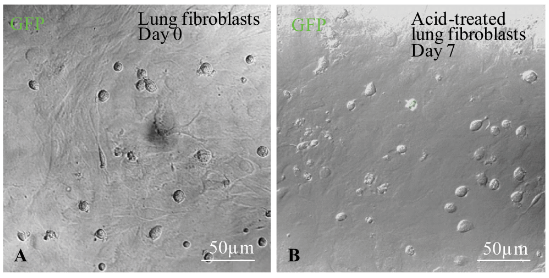 No iPS cell markers after acid treatment. Image from article.

Lee’s article has undergone a pre-refereeing check, and has now been sent to peer reviewers, whose comments you will be able to read underneath the article as and when they come in – with reviewer names. Once the article passes peer review (either in this version or after revisions), it will be indexed in PubMed and other external databases.

We use this completely transparent process for all articles we publish in F1000Research, and we believe that this particular case very clearly shows the benefit of a transparent system over the more traditional approach that has inevitably led to the ongoing problems following the original article in Nature: you will all be able to see what the invited reviewers think about Lee’s article, you can leave your own comments as well, and you can track any new incoming referee reports or comments on the paper by clicking “Track” on the article page.

You can also download the associated data sets to do your own analysis. We know that some other stem cell researchers have tried to replicate the acid bath experiments – now you can see how your data compare to those of the Lee lab. (And if you’d like to publish your own findings as a short Data Note, we’re currently waiving the article processing charge on those. Find out more here.)

Stem cell science has suffered from a closed publishing system perhaps more than many other disciplines, and it’s time to open up.