The pub is a quintessential British institution. It is the place where you meet your friends, have a drink with lab mates on a Friday night, and go for lunch when your family visits. But is not normally thought of as a place to hear about cool science. A group of scientists in the UK decided to change this by organising the science festival “Pint of Science”. As the name suggests, the idea of this festival was to bring science to the pub- to discuss science in an informal environment where people feel comfortable and relaxed.

“Pint of Science” took place between the 14th and the 16th of May in 15 pubs across 3 cities: Cambridge, London and Oxford. Over 70 scientists made their way to the pub to talk about their science with the public, covering a wide range of topics: from robots to cancer; from hip-hop to vaccines. As I live in Cambridge I popped down to The Avery, a pub in the centre of Cambridge, to hear all about stem cells. Although the environment was that of a pub, it was clear that something was different- maybe it was the beautiful microscopy pictures of stem cells being projected on a screen, or maybe the “Pint of Science” branded glass mats! 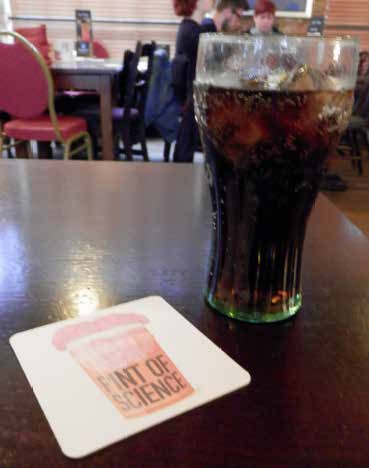 Three group leaders from the University of Cambridge gave talks. The first, Dr Jose Silva, gave a great overview of what embryonic stem cells are, the idea and process of reprogramming, and the relevance of the work of last year’s Physiology and Medicine Nobel Prize winners. This talk generated very interesting questions from the audience: What is the age of reprogrammed stem cells? Can embryonic stem cells lines be combined with 3D printing to generate complex organs? And here the audience experienced some of the reality of science- there weren’t conclusive answers to all the questions, but there was plenty of food for thought!

The other two speakers addressed different therapeutic applications of understanding stem cells and reprogramming. Dr Mark Kotter presented some of his lab’s work on understanding why the stem cells responsible for neuron myelination misfunction in multiple sclerosis, and possible strategies to prevent this. Dr Rick Livesey described how the reprogramming of ESC or iPS cells can allow the establishment of ex vivo models in which brain diseases, such as dementia, can be studied. Between the talks another typical british pub activity was adapted to science communication: a stem cell/biology-themed pub quiz! The winner took home, very appropriately, a branded pint glass.

It was a great evening, with an unusual mix of interesting science and pub environment (and drinks!). Is not often that you hear a science talk with the sound of football in the background… nor a speaker that acknowledges that he is also very interested in the outcome of the game! It would be great to hear about what other “Pint of Science” talks were like, but if you missed them then don’t worry. It is possible that “Pint of Science” might come to a pub near you next year!