The research headed by Roger Gomis at IRB Barcelona, with the collaboration of Joan Massagué, describes that the loss of the suppressor RARRES3 promotes the colonization of breast cancer cells in the lung.

RARRES3 could prove to be a useful marker to identify patients with a greater risk of metastasis, as well as providing a target for the development of a specific treatment for preventive strategies after removal of the primary tumour.

A study published today in EMBO Molecular Medicine reveals that the loss of function of the gene RARRES3 in breast cancer cells promotes metastasis to the lung.

The research, headed by Roger Gomis, ICREA Professor at the Institute for Research in Biomedicine (IRB Barcelona), is the result of a collaboration between two IRB labs and Joan Massagué, at the Memorial Sloan Kettering Cancer Center in New York.

The scientists demonstrate that RARRES3 is suppressed in estrogen receptor-negative (ER-) breast cancer tumours, thus stimulating the later invasion of the cancer cells and conferring them “a greater malignant capacity,” says Gomis, head of the Growth control and cancer metastasis lab at the IRB.

This type of tumour accounts for between 20% and 30% of breast cancer cases, the metastasis of which usually occurs in the lung or other soft tissues. This stage of the disease is generally fatal. The studies have been performed in samples from mice and in cell lines and have been validated in 580 samples from primary breast cancer tumours.

The study describes that RARRES3 loss of function allows the breast tumour cell to develop the adhesion capacity of malignant cells when settling in lung tissue. Furthermore, after losing RARRES3 cells also lose differentiation capacity (specialization in a specific cell type), which facilitates the initiation of metastases in distant tissues.

“The transformation of a normal cell into an invasive tumour cell is not just about acquiring capacities but equally important is the loss of certain genes, such as RARRES3,” explains Roger Gomis.

The researchers have established that the detection of the loss of RARRES3 could provide a marker to identify patients with greater susceptibility to lung metastasis.

In addition, they uphold that, in order to enhance cell differentiation and to prevent stem cell capacity, which confers greater malignancy, some patients may benefit from treatment with retinoic acid to prevent metastasis after the removal of the original tumour.

“Treatments with retinoic acid have already been tested for other conditions. We consider that it would be interesting to develop specific treatments for this breast cancer subtype,” says Gomis.

Mónica Morales, postdoctoral researcher, and Enrique J. Arenas, “la Caixa” PhD student, both in Roger Gomis’ lab during the research, appear as first authors of the study. Xavier Salvatella, ICREA Professor and head of the Molecular Biophysics lab at IRB, contributed to revealing the key structure of RARRES3 that explains its dual role in the cell.

The study was partially supported by the BBVA Foundation, which since 2006 provides funding for metastasis research undertaken at IRB Barcelona, and by the Spanish Association Against Cancer” (acronym in Spanish AECC), the Catalan Government, and the Spanish Ministry of Economy and Competitiveness. 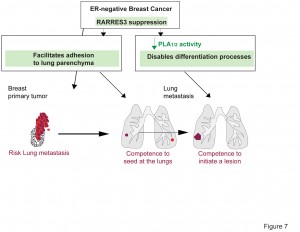 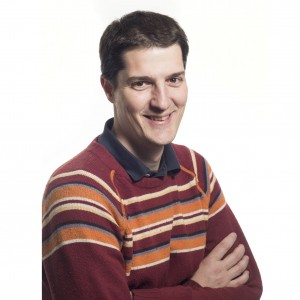