Hosted in beautiful Seattle, the Society for Developmental Biology (SDB) held its 73rd Annual Meeting on the University of Washington campus in (mostly) sunny July. Here researchers from around the world working on different developmental processes and models come together to share their results and learn about advances in the field. SDB is quite generous with their funds to support students and postdocs to attend the national meeting, and this year I benefited from this generosity. I won a presentation award at the regional SDB meeting held in my area which largely funded my trip to Seattle. Thank you, SDB! 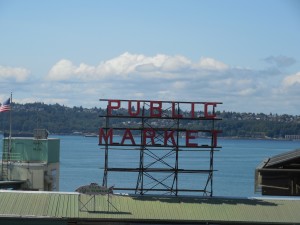 Kicking the meeting off was a Boot Camp for New Faculty, followed by a series of joint and concurrent sessions, workshops and symposia, and poster sessions. Early in the meeting was the Presidential Symposium featuring several invited researchers prominent in their fields, representing several developmental models. Here they discussed what genetic model organisms have taught us, using examples of research in their own fields. Paul Sternberg aptly summarized the main uses of model genetic organisms: “to identify the function of conserved genes, to assemble genes into functional pathways, and serve as a test bed for new approaches”. He also described his work using the worm as a model to study cell migration and how this model allowed him to test predictions. Ruth Lehmann added to our characterization of genetic model organisms that to study your developmental process of interest you need a good model/system and you need a good phenotype. She uses the fly to study the mechanism of mitochondrial inheritance and the role of Oskar in this process. Using Arabidopsis to study regulatory networks, Philip Benfey studies mutants with impaired root formation to understand cell specification. Next Terry Magnuson gave a fascinating history on laboratory use of mice leading into using mice to study genetics and human disease and the establishment of the collaborative cross, an effort to use genetically diverse founder strains to generate recombinant inbred strains [1]. Lastly, Wolfgang Driever talked about early development and the role of the Pou5f1/Oct4 transcriptional network using zebrafish. Such a broad overview of the advances achieved in development research made possible by using many model systems was a great way to kickoff the meeting. 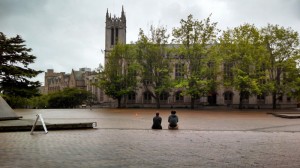 Being a zebrafish neurobiologist, I mainly sought the sessions and talks pertinent to my work, and was not disappointed. David Raible chair the session on neural development, which consisted of seven different speakers covering sensory hair development in zebrafish and the programming involved in the cortex for neuronal diversity to mitochondrial transport in axons and the regulation of olfactory circuits. The symposium on Human Development and Disease, co-chaired by David Beier and Mark Majesky, had to be interesting to all, featuring talks from Alexandra Joyner, Andrew MacMahon, Ophir Klein, and Kiran Musunuru. Interspersed between these sessions were coffee breaks with delicious pastries. Scientists need their coffee, and Seattle is the place to get it. 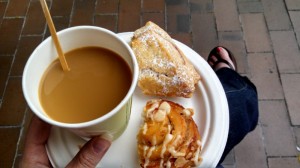 Another session I found particularly interesting was the Awards Lectures. Here four awards, one FASEB and three SDB, were presented to five individuals followed by a short presentation from each. Kathryn Anderson was awarded the FASEB Excellence in Science Award and spoke about her work studying the importance of cilia in the mouse embryo. The Viktor Hamburger Outstanding Educator Prize was awarded to Larry Bock with the USA Science and Engineering Festival. He discussed how the festival started, the incredible amount of collaboration and participation that went with it, and the extraordinary impact it has on the young people who attended. It really makes me want to volunteer at the next event, as well as check out some of the speakers and exhibits myself! Richard Harland was awarded the Edwin G. Conklin Medal and discussed how often some of the most interesting experiments are deemed too risky for NIH funds, but are still worth doing. Finally, Janet Heasman and Christopher Wylie were awarded the Developmental Biology-SDB Lifetime Achievement Award. They described the evolution of the field of developmental biology over the years and the course their paths took along the way, intermingled with some funny stories, and the love they have for their family and work.

Each evening we meet for poster sessions and refreshments, and an opportunity to mix and mingle with fellow scientists and talk one-on-one about new data and ideas. Some of the best suggestions I’ve received have been from poster sessions. Throughout these poster sessions vendors were set up and ready to talk about their products or answer any questions. One such table was of great interest and benefit for me.  Sponsored by the FASEB Career Resources/MARC Program, Joe Tringali, Managing Director of Tringali & Associates, Inc., was on hand to provide individual resume critiques. He not only offered great advice on the organization and layout of my resume but also provided invaluable guidance on job hunting in alternative careers in science. I highly recommend that students and postdocs make use of opportunities such as these, receiving personal and professional advice is priceless. Additionally, I urge societies continue to provide opportunities for career/professional development and promote guidance and assistance of this kind. As “alternative careers” in science are fast becoming the majority, it behooves us all to provide grad students and postdocs with career development tools and guidance.

I would be remiss if I failed to mention the hilarious and fun ending to the meeting. We all gathered for a banquet and entertainment provided by Morris Maduro and Curtis Loer, two worm researchers with a knack for humor. They put together an hour show The Development Show, complete with jokes, adapted songs, video clips from the poster sessions, and short video segments. Anything that starts with a Star Wars theme, incorporates Nirvana and developmental biology (hence the “Smells like development” title), and adapts songs from Les Misérables to the lab setting has to be entertaining! See their full length show and a nice write-up from another Node blogger bere.

Though I have studied development the entirety of my graduate and postgraduate career, this is the first time I attended the national meeting, despite the fact that I am a regular attendee at the regional meetings.  I really enjoyed the superb quality of science discussed, the breadth of developmental processes presented, and the diversity of model systems used. I hope to attend more SDB meetings in the future.