Soapbox Science follows the format of using historical areas for public debate, such as London Hyde Park’s Speakers Corner, providing a way of bringing scientists and their work to the public.  It strips away props such as powerpoint slides and encourages a dynamic dialogue between the scientist standing on a soapbox and the general public, all within a bustling city environment.

I was delighted when out of the blue I received an invitation from the dynamic organisers, Dr Nathalie Pettorelli and Dr Seirian Sumner, to speak at Soapbox Science in July 2012.  Soapbox Science was then in its third year and hosted by the Zoological Society of London (ZSL) and L’Oréal-UNESCO for Women in Science Programme.  The aim was to increase the visibility of UK women in science by giving them the opportunity to present their science in an accessible, engaging way to the general public.

This particular Soapbox science event took place on London’s South Bank, and was focused on inspiring a new generation of female scientists, by showing them how accessible a career in science is.  Indeed a special effort had been made to encourage 14-18 year old school children to attend. 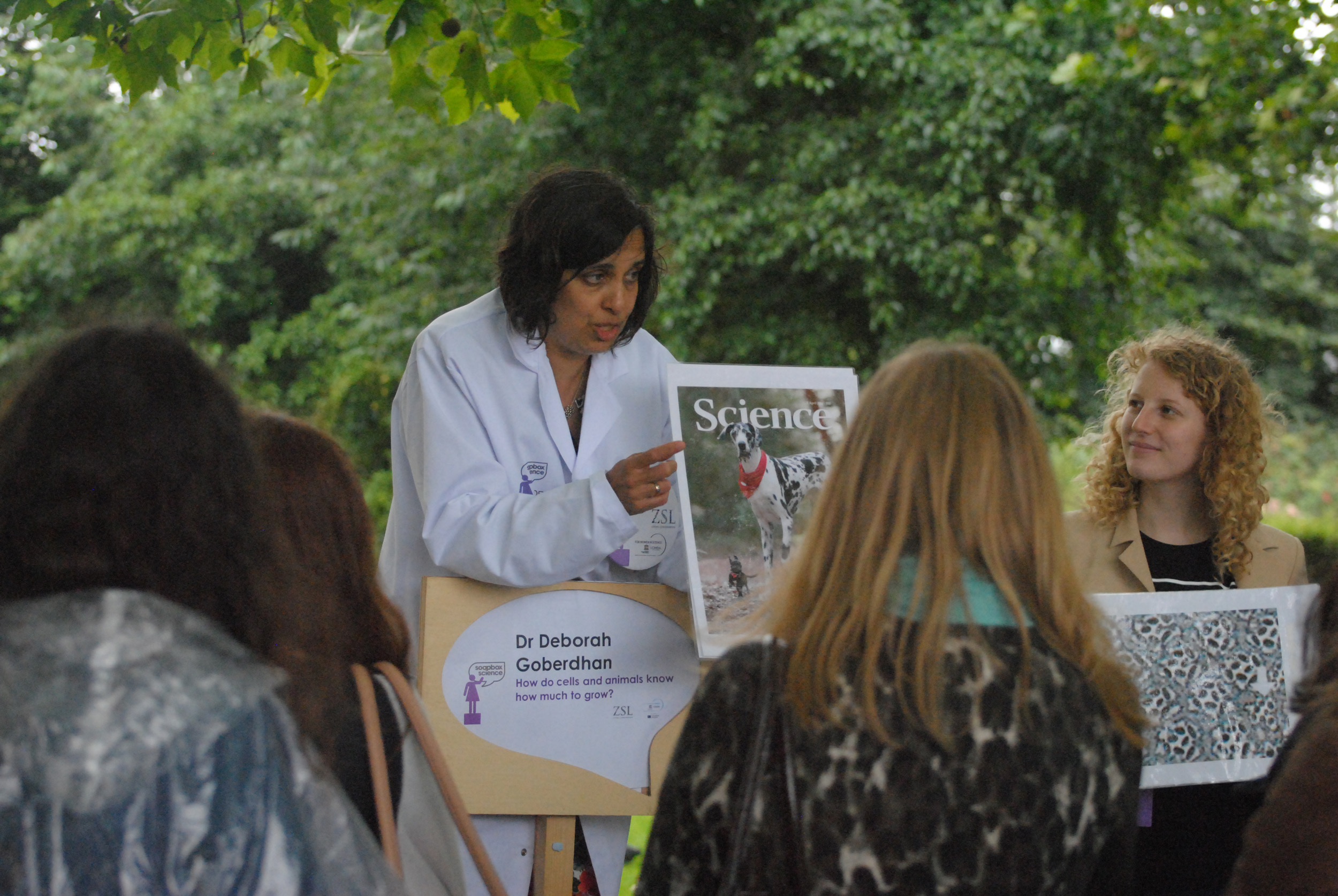 I was one of thirteen speakers, selected to speak about their science and to field questions from the school children and members of the public.  Dr Seirian Sumner commented, “This year we showcase how women in science can and do reach the top: these women are some of the UK’s top real women in science, and from their Soapboxes they will share their passion, motivation and scientific excellence with the public.”  Co-organiser Dr Nathalie Pettorelli, said “We hope this event will inspire a new generation of scientists, giving them the confidence to push through existing barriers, and help change the societal norms that currently hold women scientists back.”

Soapbox Science is not restricted exclusively to speakers from academic backgrounds.  For example, the Soapbox Science event I was involved with also featured entrepreneur Ruth Amos, Young Engineer for Britain in 2006.  Ruth invented the StairSteady, an aid to enable people with limited mobility to use their stairs confidently and safely.

I run a research group in the Department of Physiology, Anatomy and Genetics (DPAG) at Oxford.  We are interested in understanding how cell and animal growth is controlled, and study these processes both in fruit flies and in human cell culture .  Of course, I am much more accustomed to dealing with, for example, an audience of fellow scientists at a conference or students in a lecture.  However, the Soapbox presentation did not involve a ‘captive audience’ of that kind, but a transient flow of people along the South Bank who had not necessarily been expecting to have to get their heads around scientific concepts that day.  It was our job to grab their attention and to try to get them to engage with us in a dialogue.  With the aid of a trusty assistant, who was teamed up with me for the day, I chose to illustrate my talk with laminated pictures, some of which my daughters, Silvana (aged 21) and Tara (aged 14), who accompanied me, had helped to draw the day before.  I’ve always enjoyed engaging with the public and Soapbox Science turned out to be a really fun way to do this. 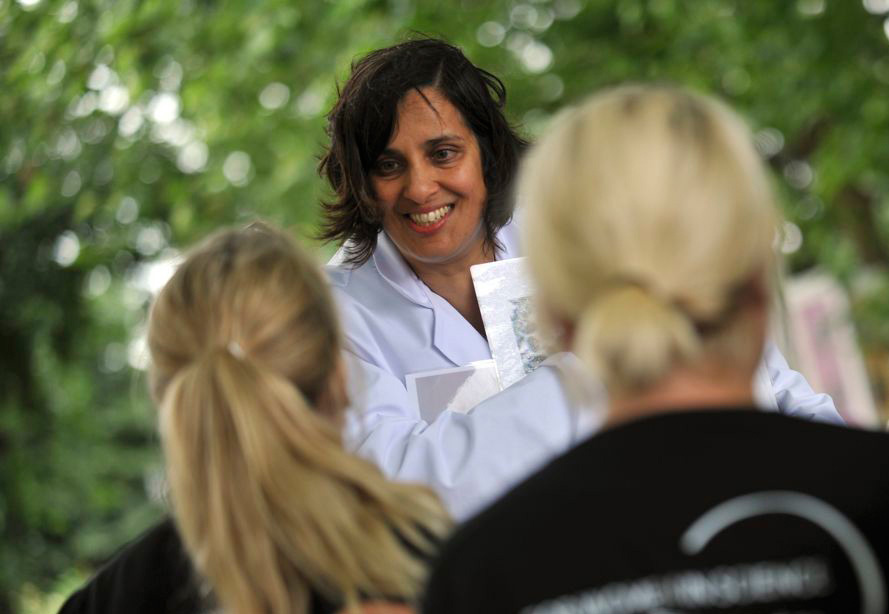 Before the event had started, I had wondered whether members of the general public would be interested in my work.  As it turned out, they clearly were.  As always in Outreach events, a key challenge was to be able to communicate the specialist ideas that we focus on from day-to-day in the lab in an engaging and accessible manner to people from a broad range of backgrounds.

My story had a number of key ideas to get across, many of which could be posed as questions: How can focusing on flies help us to understand human biology?  Why aren’t we three metres tall?  What does developmental biology tell us about cancer?  It was interesting to see the reactions when unsuspecting people found out how similar to flies they were!  Children and adults are often fascinated by animal development, but they frequently don’t connect it to the human diseases they know of.  It was a real opportunity to engage with the public and to convey how our most recent work, which probes the mechanisms by which cells sense nutrient levels around them, is suggesting new ways of blocking human cancer growth and monitoring cancer progression.  Some of this is discussed on a blog I wrote around that time.  Soapcox Science is expanding nationally this year, to provide more opportunities for women scientists around the UK to engage with the public in this way. This year (2014), Soapbox events are being held in London (29th June), Bristol (14th June), Dublin (26th April) and Swansea (5th July). The venues and speaker line ups can be found on the Soapbox website . If you would like to have a go at discussing your science from a Soapbox, you can put yourself forward for the events next year, via the annual call for speakers at www.soapboxscience.org.  This call for is advertised around December to January, for a February deadline. Throughout the year, Soapbox is active in other ways. For example, its website hosts blogs from women in science, sharing their personal stories, experiences and opinions. If you would like to contribute to this, you can contact the Soapbox Science team via soapboxscience@gmail.com, or via twitter @SoapboxScience.

For my part I am keen to be involved in more events like Soapbox Science, which involve communicating science to the public.  I would also like to encourage further participation in University Programmes designed to inspire school children from more challenging backgrounds, and those from schools without a tradition of sending students to Oxford, to consider a career in science and perhaps to study at Oxford or work in a lab like mine. 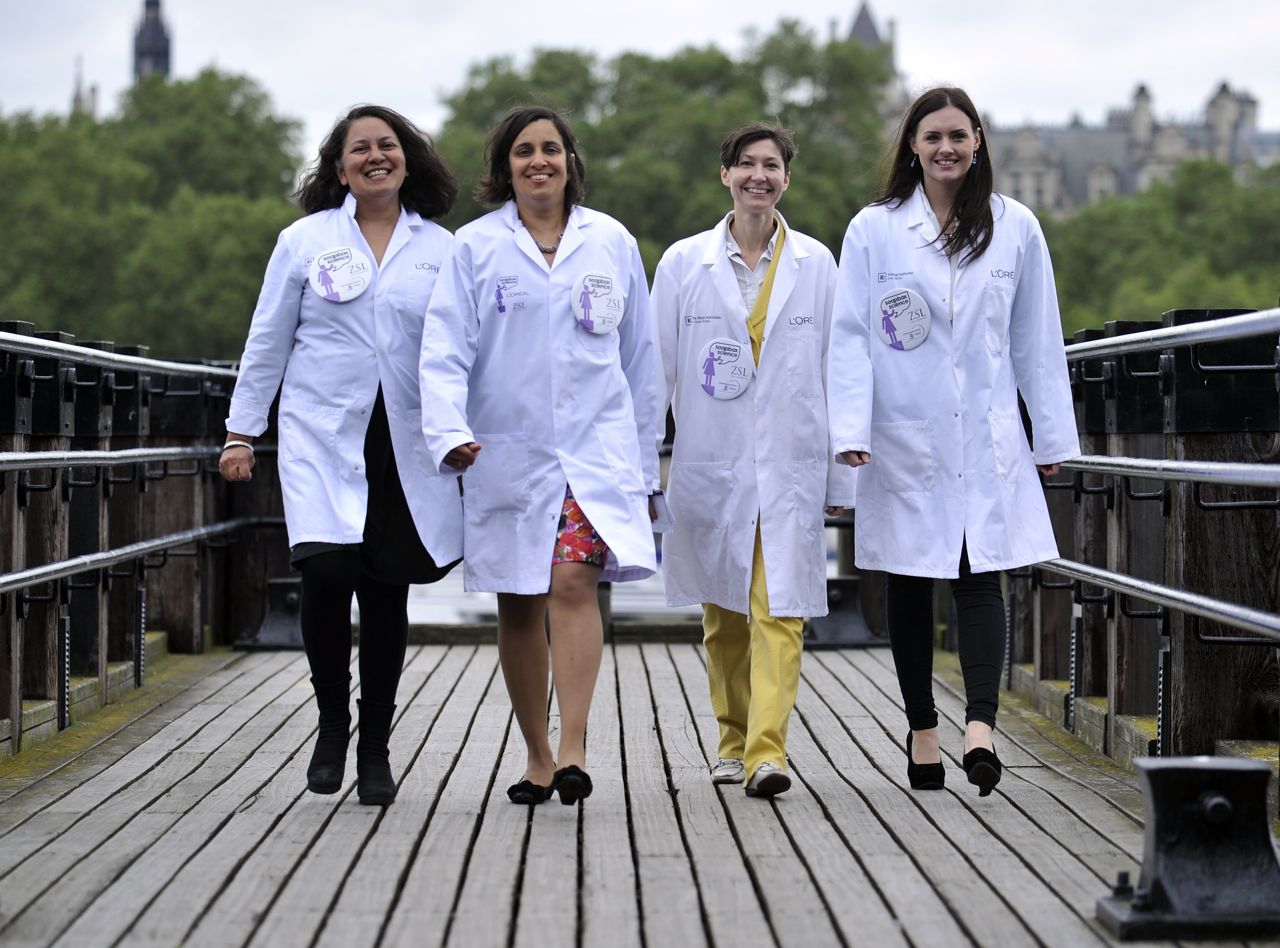