I studied molecular mechanisms of faithful chromosome segregation in mitosis and meiosis during my PhD and wanted to continue studying chromosome segregation but from a different angle. While looking for a postdoc lab, I learned about a phenomenon called meiotic drive where the selfish genetic element preferentially segregates into the egg during female meiosis in violation of Mendel’s Law of Segregation. I became quickly fascinated by meiotic drive and decided to join Dr. Michael Lampson’s lab at the University of Pennsylvania where they study the cell biological basis of meiotic drive in mammals.

Female meiosis is inherently asymmetric, producing only one gamete, and only chromosomes that segregate into the egg will be inherited to the next generation, while the rest will be degraded in the polar bodies. This asymmetric fate of the chromosomes creates an opportunity for them to compete during the meiotic cell division to remain in the egg, providing the framework to drive the evolution of genetic elements that regulate the segregation such as centromeres. Indeed, centromeric DNA is the most rapidly evolving DNA sequence in eukaryotic genomes despite its conserved function in chromosome segregation. Although examples of meiotic drive are widespread across eukaryotic species (plants, insects, and mammals including humans) with significant impacts on chromosome evolution, the underlying cell biological mechanisms are largely unknown.

The meiotic drive project was a perfect fit for me, where I could use my expertise in chromosome segregation to tackle an exciting evolutionary biology question. When I joined the Lampson lab, I overlapped for several months with a former PhD student, Lukáš Chmátal, who established the system to study meiotic drive in mouse oocytes. This was a great opportunity for me to learn about meiotic drive and the mouse oocyte system, both of which were new to me. My long-term goal is to understand how a selfish centromere interacts with the microtubule spindle to preferentially remain in the egg. In theory, a selfish centromere needs to find out which side of the spindle will take it to the egg. This implies some kind of asymmetry within the spindle, but the mechanisms were mysterious. So, my first goal was to understand the molecular basis of the spindle asymmetry, which is the main topic of this post. This spindle asymmetry project was originally started by Lukáš who established the basis before I joined the lab. It was also strongly supported by the collaboration with Dr. Carsten Janke at Curie Institut, who is one of the leaders in post-translational modifications (PTMs) on tubulin, which composes microtubules. Carsten suggested that we test the possibility that a tubulin PTM is asymmetric within the spindle, and indeed this was the case! Tyrosinated (Tyr) α-tubulin was enriched on the cortical side of the spindle, which will end up in polar body, whereas detyrosinated (dTyr) α-tubulin was enriched on the interior side of the spindle, which will remain in the egg. Subsequently, I found that CDC42 GTPase that localizes to the polarized cortex (green in the figure below) is required for the asymmetry in Tyr α-tubulin (white in the figure). Therefore, we proposed a model where CDC42 is the master regulator of the spindle asymmetry, increasing Tyr α-tubulin specifically on the cortical side of the spindle. 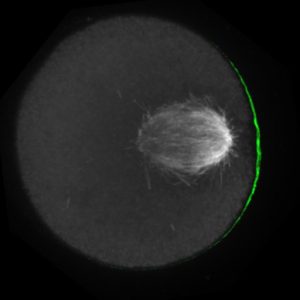 To support this model, I aimed to induce an artificial spindle asymmetry by targeting CDC42 to one of the spindle poles. I decided to take an optogenetic approach, which was previously developed in our lab using culture cells. So, I thought, “Okay, I just need to apply it to mouse oocytes”. But it turns out, it was not that simple. Science is not that easy… But thankfully, I had great colleagues Huaiying Zhang (Lampson lab) and Chanat Aonbangkhen (David Chenoweth lab at Penn Chemistry), who were working on this optogenetic tool in cell culture and helped me a lot to optimize the light-induced targeting in mouse oocytes. After multiple rounds of trial and error, optimizing the laser intensity and the constructs for the targeting, I successfully targeted CDC42 specifically to one spindle pole and found that it is sufficient to induce asymmetry in Tyr α-tubulin consistent with our model. (I personally think this optogenetic tool will be useful to study female meiosis in general because it allows us to control protein localizations spatially and temporally, which is of course important in mouse oocytes as well as in other systems)

Now we know a little bit more about meiotic drive at least in our system, but there are many big questions remaining. For example, we still don’t know how CDC42 regulates tubulin tyrosination. The link between CDC42 and the tyrosination is new, and the underlying mechanisms are completely unknown not just in mouse oocytes but also in other systems. It would be interesting in future to examine whether CDC42 regulates the enzyme that catalyzes tyrosination. Also, it is mysterious why the spindle is asymmetric in the first place. There should be some function in female meiosis in general, and the selfish centromere is just exploiting that asymmetry. Furthermore, we don’t know what activity at the centromere confers selfishness. Previously, our lab in collaboration with Ben Black’s lab (Penn Medicine) showed that a selfish centromere has expanded satellite repeat sequences and recruits more centromere proteins compared to the centromere of the homologous chromosome. I am very curious which protein(s) at the centromere is actually important for their selfish behavior. The above projects would help answer my long-term question − how does a selfish centromere interacts with the spindle to win the competition in female meiosis.

Biased chromosome segregation is not restricted to meiotic drive, but also present in some asymmetric stem cell divisions (e.g. muscle stem cell), where the old DNA strand preferentially remains in the stem cell and the newly synthesized strand segregates to the differentiated cell. Since the mechanisms of biased segregation in these systems are unclear, it would be interesting to examine whether we can extend the concept of biased segregation that we learned from meiotic drive to other systems.