There are several things that could bring me to Switzerland. I guess that the Alps, cheese, and swiss chocolate would be 3 top-choices, I could talk about Swiss army knives and watches too, but I would never assume that the reason for my Switzerland visit would be… zebrafish. Of course not just as the ordinary wildtype zebrafish swimming in rivers of India. Not even the one nowadays available in the pet shops all over the world. I came to Switzerland for very specific (transgenic) zebrafish lines that could allow me to find out the answer for the questions I keep asking myself from the beginning of my PhD study.

Knowledge about the embryonic origin of paired teleost fins is a missing element that would help us to fully understand fin development and the fin to limb transition in evolution. It has been shown before that skeleton of mammalian limbs originates from lateral plate mesoderm; contrarily, it has been thought that rays in fish fins origin from trunk neural crest. Recent publications, including of my PhD supervisor Dr. Tomas Carney (AStar Singapore), have shown that it is not neural crest but paraxial mesoderm that gives rise to the osteoblasts (bone forming cells) in the zebrafish tail. This again rises the question about the origin of skeletal elements in paired fins. We had discussed ideas for possible answers but we were lacking tools to perform informative experiments. 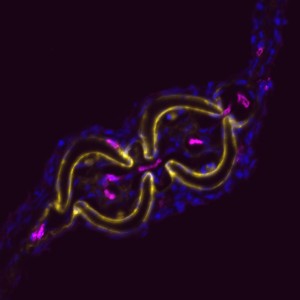 The laboratory of Prof. Christian Mosimann at the University of Zurich works on early cell fate determination of the lateral plate mesoderm, which gives rise to the circulatory system, the kidneys, and the limbs. The Mosimann lab has established unique transgenic zebrafish lines that allow visualization, tracking, and genetic lineage tracing of the developing lateral mesoderm. Prof. Mosimann and Dr. Carney had previously met at the International Zebrafish meeting in Barcelona in 2013, and over a glass of Rioja discussed the possibility to use the Tamoxifen-controlled Cre/lox technique developed by Christian to tackle the lateral plate contribution of the developing fins. So the plan was born to send me to Switzerland. With the financial support from the Company of Biologists who kindly awarded me with a travelling fellowship, I was able to collaboratively visit Zurich.

The University of Zurich and especially people from the Mosimann lab created a welcoming and productive environment to work. Despite the lab’s recent start in spring 2013, the place is buzzing with exciting science. The friendly, energetic atmosphere and unconditional support from all members of Mosimann lab made my stay highly enjoyable and productive. I had a chance to learn new techniques that members of Mosimann lab handled with real expertise. Anastasia Felker, a fellow PhD student in the Mosimann lab, is already an expert in cre:lox techniques while Christopher Hess, another PhD student, critically helped me with the molecular biology side of things. Even members of other laboratories have been ready to help me. I owe big thanks to Claudio Cantu from Basler group who has shared his work space with me and helped me to perform my crucial experiments on sectioned fins. I have gained new work colleges who then became my friends. Despite the serious hours spent in front of a cryostat and on the several fluorescent microscopes, I had ample opportunity to explore Zurich and the finer points of Swiss culture (including chocolate, cheese fondue, raclette, and snowboarding in the Alps). And yes, I now do own a Swiss army knife, and have acquired a similarly versatile new skill set to tackle my biological interests using zebrafish. 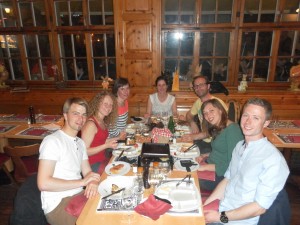