Earlier this month, I attended the annual meeting of the International Society for Stem Cell Research, which was held in Yokohama this year. I won’t go into much detail about the meeting itself, because James and Dongjin wrote some great posts about it for the Node. If you haven’t yet read them, take a look:

The ISSCR always encourages tweeting at their conference, and I tried to livetweet some of the talks, where possible. Although there was wifi in all the hallways and lobbies of the conference centre, and in the rooms of at least one of the hotels, there was (almost) no wifi in the seminar rooms or the exhibit hall, which is where everything happened! That may have been one of the reasons that very few people took part in the Twitter conversation. Because we were in Japan, all of the non-Japanese attendees relied on wifi for their tweeting. I did keep track of everyone’s tweets, and collected many of them in a Storify, which you can find below.

One of the things I found on Twitter was a poll started by Paul Knoepfler. He could not attend ISSCR, but set up a poll to ask participants what they thought of the conference. From the percentage distribution of the answers it seems that only about twenty people have responded, but they overwhelmingly voted that the conference was “so so”. Unfortunately none of the respondents left a response, so it’s not clear what they didn’t like, or whether they had attended the conference before. It’s a big meeting, and takes some getting used to if you’ve only been to smaller events. I personally had the impression that there were more clinical and applied posters than in previous years, but the topics covered in the talks were very broad and included a lot of fundamental research.

Another online aspect of the ISSCR Meeting was the new ISSCR Connect, allowing ISSCR attendees to catch up after the conference and see some of the talks in the concurrent sessions that they missed. They’re offered by a staggered schedule. At the moment, people who attended the conference can log in and view the talks from the first group of concurrent sessions. (No link, because it’s only available to meeting attendees.) ISSCR Connect also has a networking section, and three groups – including the Node – used ISSCR Connect to announce a small get-together. 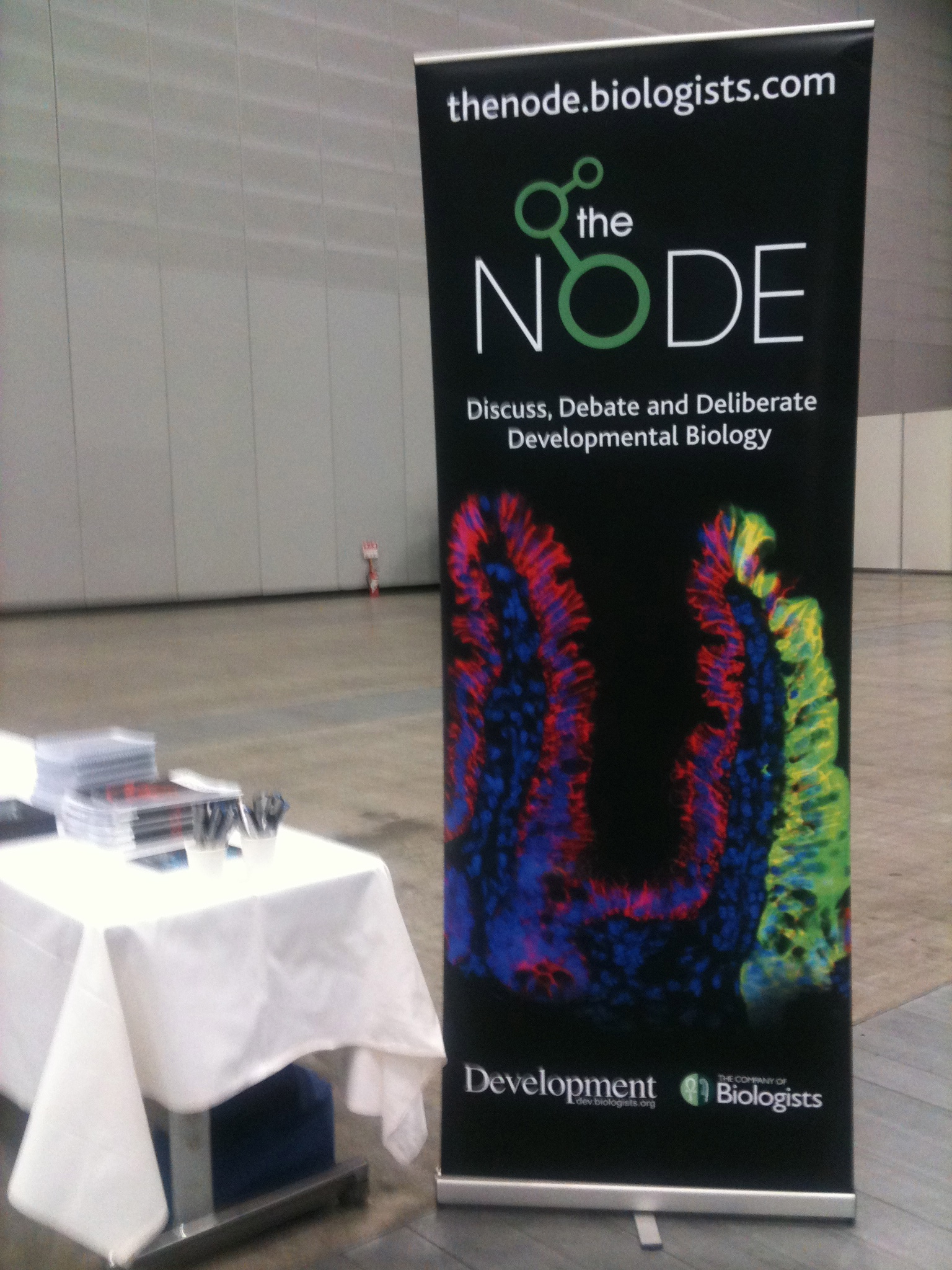 The Node’s meetup was during the Thursday afternoon coffee break, in the Exhibition Hall. The Hall was open to everyone for coffee and posters, and people interested in meeting other developmental biologists could drop by our little corner. Some people stayed for most of the break, while others came by briefly just to say hello or to grab some freebies. To the left is a picture of our little corner before people arrived. (Once they did, I didn’t have time to take photos!)

It was interesting to note that, even though the conference was in Japan, and there were many Japanese people there, I barely met any of them. A few came by the Node coffee break, but only to take some information from the table. It’s unfortunate, because I would have liked to meet more Japanese researchers!

On this same trip, before the conference started, I had a chance to interview Development‘s newest editor, Haruhiko Koseki. He observed that, in general, Japanese students and postdocs are not as likely to join in with social activities or be as assertive as scientists from other countries, and he believes that that might actually affect their success as scientists! The full interview will appear in Development and on the Node later this year, so keep an eye out for that.

Finally, below is the Storify from the conference. (My favourite part is the exchange about invisible mice between “Yogioner” and “R.J.” on Thursday afternoon.)