About a year ago – when spending some quality afterwork time on the Internet – me and my benchmate Dario stumbled upon LilBUB. If you’re an internet cat afficionado you’ve probably seen LilBUB around. She’s extremely cute and lovable, and she’s got something of a celebrity status. But, as developmental biologists, we were also intrigued by her in a different way. Which is why, two weeks ago, we launched a crowdfunding campaign to sequence the genome of LilBUB. This is the story of our campaign so far. 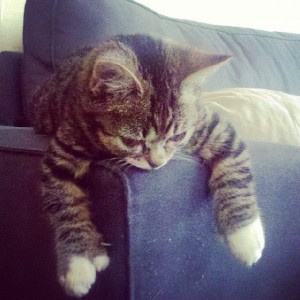 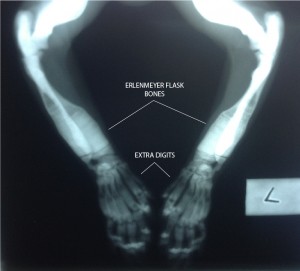 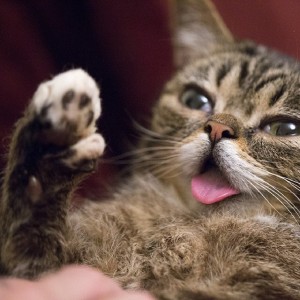 Remember: there’s only one BUB.

LilBUB is not only terribly cute, but she was also born with a strange combination of phenotypic traits. She’s polydactyl (one extra digit on every paw), she’s really small, has a short jaw, possibly some sort of skull bossing, and so-called Erlenmeyer-flask bones. All of the latter traits hail from a very strong bone overgrowth diagnosed as osteopetrosis type IV, but the vets were unsure in their diagnosis. Finally, the bone overgrowth led to her jaws mineralizing too quickly, preventing almost all of her teeth to emerge. Also, since her tongue developed to normal length, it’s hanging out most of the time.

From human to cat genetics

Dario and I are postdocs at the Max-Planck Insitute for Molecular Genetics in Berlin. The focus of our work is to uncover the developmental pathomechanism underlying disease-causing mutations, which have been identified by our human geneticist colleagues. We primarily study mutations affecting limb patterning and bone biology. So we couldn’t help but notice the parallels between the patient-cases that we usually deal with and the phenotype of LilBUB.

Surprisingly though, while we could assign individual traits of LilBUB to one human disorder or another, her combination of traits (with polydactyly AND osteopetrosis) is unique and unlike any case we know. We immediately started hypothesizing what kind of mutation could cause her special looks. Did she have a new form of osteopetrosis? Or was she suffering from two rare diseases? We were super-curious really wanted to find out. So we wrote an email to BUB’s owner, asking if he would allow us to sequence LilBUB’s genome. The reply came within five minutes – he was totally up for it!

The power of the crowd

Having decided to sequence LilBUB we quickly realised that this should not be a traditional project, done somewhere in an isolated laboratory and then communicated only in a scientific journal.

Thus, we came up with the idea to crowdfund the project, to create some sort of hybrid of classical lab work, outreach and citizen science – and whatever else it would evolve to be. This way we could make thousands of people around the world co-owners of the project, and share our quest with them.

Months of preparation followed. First, we joined forces with Uschi, a former collaborator of ours, who had worked on polydactyly during her PhD. She was incredibly enthusiastic about the project, but equally importantly she also brought experience in science communication to the team. As a trio we then set up a project website and social media accounts, scripted a crowdfunding video, and devised a strategic plan for experiments and outreach. Most importantly, following months of brainstorming we came up a name: from a combination of LilBUB + genome, we created the LilBUBome!

And so, two weeks ago, we launched the crowdfunding campaign for the LilBUBome, as well as an accompanying blog, facebook and twitter account. The project launched simultaneaously with it’s sister project, the 99 cat lives initiative by Prof. Leslie Lyons from the University of Missouri. Leslie is an expert in cat genomics, and the 99Lives intends to sequence 99 cats from all over the world to figure out the genetic basis of feline biology and disease. It’s a great combination, when we get to sequence LilBUB we’ll have Leslie’s expertise and plenty of other data to use as a reference, and two projects hopefully reach more people than only one. There could have been no better time fort he LilBUBome than now.

After 2 weeks of fundraising this is what we know: It’s exciting. It’s fun. We love the interactions with our backers and followers. But in one respect it’s just like most other lab-related work: we don’t know whether it’ll work. If we fail to raise the money until May 24th, we get nothing! So, if you’re as curious as we are about the causes behind LilBUB’s magical looks, please spread the word, like, share and maybe even directly support us!